What’s up (or not) with Great Lakes water levels?

Some of the Great Lakes may reach all-time low water levels this winter. Why do Great Lakes water levels change? We look at annual and long-term lake level changes in the second of a two part series – Part 2 of 2. 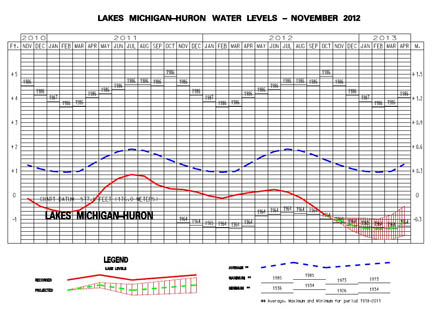 winter, as regular as clockwork. Look at the accompanying graph of the Lake Michigan-Huron levels since late 2010. The blue dashed line is the long-term average levels dating back to 1918. You can see a regular annual oscillation, with the peak in July and the trough in February. But what causes this annual cycle? In the fall and early winter, when the air above the lakes is cold and dry and the lakes are relatively warm, evaporation from the lakes is at its greatest. Consequently, water levels decline to their seasonal lows. As the snow melts in the spring, runoff to the lakes increases. Evaporation from the lakes is also least in the spring and summer when the air above the lakes is warm and moist and the lakes are cold. With more water entering the lakes than leaving, water levels rise to their peak in the summer.

Lake levels may move irregularly, however, over the course of any given year. We saw some irregularity this past spring – the solid red line marks actual monthly average levels – when the winter trough was not followed by its normal rise into summer. What happened? Extreme weather condition can cause annual irregularities like this, and you’ll recall that last winter was unusually warm in the Great Lakes region. Warm weather leads to reduced winter snow pack, which means less runoff into the lake, which contributed to a lower summer peak in 2012.

What about long-term? It’s all about weather trends and climate, both of which are difficult to predict.  After three decades of water levels above the long-term average, levels have recently come down. Most modeling efforts suggest this decline will continue. These changes are not necessarily an indicator or a result of climate change; they may be part of a natural cycle of variability. Using geologic features deposited 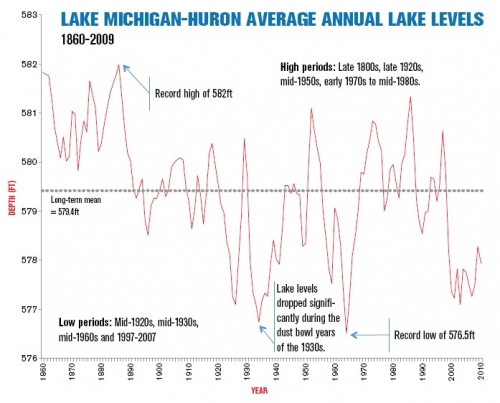 along the coasts, scientists have reconstructed the lake level history of Lake Michigan-Huron over the past 4,700 years. They have identified a general rise and fall cycle that lasts about 120-200 years. The instrumental record of the past 150 years indicates an additional rise and fall cycle of 26-38 years that occurs within the longer cycle. There has been no clear trend toward lower water levels from the late 1800s to the present. In fact, recorded lake levels since 1860 appear to be a single repetition of the 120-200-year cycle.

We don’t need to know exactly how the lake levels will change because we know that any change will not be permanent. No matter what happens with climate change, lake levels will continue to fluctuate, just as they have in the past. We can never be 100 percent sure of what will happen in the future, but we can look to the past for help. Preparing for the water level changes we’ve seen in the last 100 years is likely sufficient to address much of the variability we will see in the next 100 years. For current information on winds, waves and water levels, see the NOAA Great Lakes Coastal Forecasting System website. Additional information about Great Lakes conditions can be found on the Great Lakes Observing System website. And if you are an educator interested in teaching others about the effects of weather on the Great Lakes, check out the Teaching with Great Lakes Data website co-developed by Michigan State University Extension and Michigan Sea Grant.