When is a minnow not really a minnow?

More than 50 minnow species call the Great Lakes home, but not all small fish are minnows.

On average we may know more about minnows than any other family of fish found in the Great Lakes. We see them in darting silver schools while wading at the beach, we use them for fishing bait, and many of us spend time observing them in our aquariums. However, not every small fish we run across in Michigan’s waterways is, in fact, a minnow. It may or may not be – and so worth a second look at the diverse world of little fishes.

In all, there are more than 50 species of minnows  (a group of many fish species scientifically classified as ‘minnows’) found across our Great Lakes waterways. A variety of shiners, daces, minnows, and chubs offer examples of sub-families (groups of similar fishes within the family) of the small silvery fish that we commonly think of when we say ‘minnow.’ These species are diverse with many descriptively colorful names such as sand, spottail, blacknose, or emerald shiners. Also fathead and bluntnose minnows, northern redbelly and pearl dace, and creek, river, and horneyhead chubs – just to name a few.

You may have had a goldfish in your home aquarium or a colorful koi in your backyard water garden never realizing you were raising minnows. That's right, goldfish are a member of the minnow family and closest relative to the largest growing minnow species found in Michigan – the common carp, which were brought to the U.S. from Europe in the late 1800s. Both goldfish and common carp are non-native, introduced species – and also a relative to the invasive Asian carp (bighead and silver carp) migrating up the Mississippi River.

Not all small fish we see are necessarily minnows. Muskellunge, Chinook Salmon and Lake Trout all start their life cycle as a very tiny fish egg and then larval fish fry. Many species of small-sized juvenile fishes such as suckers and perch also can be found ‘schooling up’ in groups nearshore. Even the prehistoric Lake Sturgeon, achieving sizes of 200 to 300 pounds as Michigan’s largest fish, begins life as a larval fish measured only in few millimeters. Round gobies are a widely recognized invasive fish found throughout the Great Lakes and although small, gobies are not minnows.

Other small fish species commonly found across Michigan’s waterways include alewife, gizzard shad, brook silversides, and rainbow smelt - none of which are related within the minnow family. Rivers and lakes often serve as nurseries for juvenile suckers of many species, often confused for minnows until you take a closer look at their bottom ‘sucker’ mouths.  Brook sticklebacks, banded killifish, and mudminnows are often discovered in slower-moving streams, wetlands, and smaller lakes. Yet even when ‘minnow’ is part of their names, these small fish species are unrelated to minnows.

Adding to the identification challenge, not all minnows are silver, either. Goldfish and koi have been bred for their brilliant colors; and even in the wild, minnows such as pearl dace or northern redbelly dace brighten our rivers with their brilliant colors during breeding season. Arguably, some of Michigan's most brightly colored fish found in the wild are known as darters. Several species of darters inhabit our waters including logperch, rainbow, greenside, and johnny darters. These small fish at their largest si 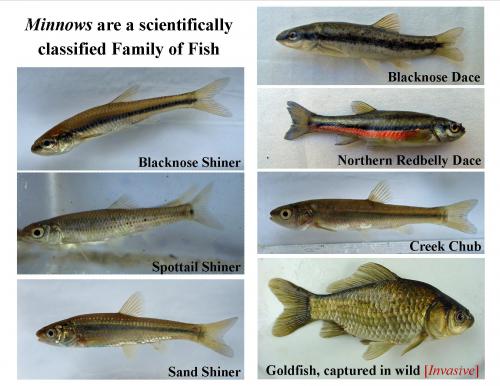 zes never reach more a few of inches, yet despite their size, they are not minnows and rather closer cousins of Michigan's more prized (and much larger) perch and walleye.

This biodiversity (or wide variety) of minnows and many other small fish species may often go unnoticed yet they provide important ecosystem functions. They represent an important part of the food chain as they are often a food source for larger predator fishes. This wide world of small fish adds their own variety to life through the many different habitats, adaptations, and life characteristics reflected in each species – which makes them simply fun to explore in their own right.

Learn more about using scientific keys to identify Great Lakes fish or visit Wisconsin Sea Grant’s Fish Identification website to discover what species of fish you may have found. Michigan Sea Grant also offers a variety of fisheries posters and publications about Great Lake fish. Hopefully, the next time you see a small fish you'll be better equipped to ask yourself if it is a minnow, a different species of small fish, or a juvenile fish aspiring to someday become a great trophy-size adult.

What is an alligator gar and why is Illinois trying to protect them?