Where do all these soybeans go?

A breakdown to uses for Michigan's second-largest commodity crop.

Anyone that drives around the bottom half of Michigan’s Lower Peninsula can observe that we grow a lot of soybeans. Michigan typically ranks twelfth of the 31 states in the U.S. that produce this popular legume. In an average year, almost two million acres of soybeans are planted in the spring and harvested in October or November when the leaves and stalks turn brown. But why do we grow so much and where does it go?

According to Mike Staton, a Michigan State University Extension Soybean educator, soybeans contain two marketable components: meal and oil. Soybean meal is very high in protein. Ninety eight percent of soybean meal is used for animal feed (poultry, hogs and cattle mostly) and only one percent is used to produce food for people. On the other hand, 88 percent of soybean oil is used for human consumption (mostly cooking oil) and 12 percent is used as an alternative to petroleum oil. According to the Michigan Soybean Promotion Committee, soybeans are the number one source of plant-derived protein on the planet. The Chinese began cultivating soybeans over 3,000 years ago and there are many varieties grown all around the world today. 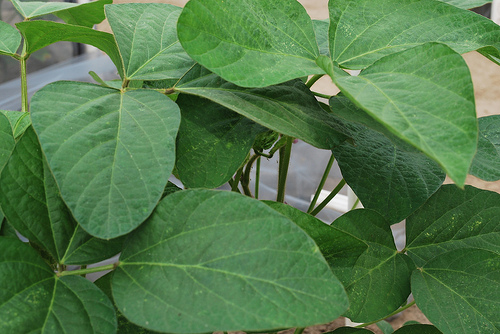 Almost all soybeans grown in West Michigan are processed by Zeeland Farm Services (ZFS). ZFS makes meal for animal feed and cooking oil - called Zoye - which is carried by many retail outlets including Spartan Stores and Meijer and is sold to restaurants and institutions by many food distributors. ZFS also exports soybeans to Japan for tofu, soy flour and miso. Some of the oil from ZFS is used to make biodiesel. B20 or 20 percent soy biodiesel and 80 percent diesel is commonly used by many diesel fleets. It requires no adjustments to diesel engines, produces less pollution, and reduces our need for non-renewable diesel fuel. Soybeans can produce both food (meal) and fuel (oil) at the same time.

Another surprising use of Michigan soybeans is soymilk produced by American Soy Products in Saline and marketed by Eden Foods in Clinton, Mich. Soymilk is lactose free and high in calcium and is sold in many outlets throughout the state.

Edamame are young soybeans harvested when the seed is at its maximum size but still green. They are typically steamed and served in stir-fry, salads or by themselves. Mike Staton says Michigan edamame is produced on a small scale and is sold in some farmers markets; however, he believes the demand to date has not justified larger scale production of this healthy legume.

Another reason we have so many soybeans is that they fit into a crop rotation with corn. This means one year farmers plant corn, and the following year they plant soybeans, and then go back to corn the next year. Staton says both crops perform better when grown in this rotation than they would under continuous production. Corn and soybeans are both highly valued crops with many buyers as both are used for many purposes including: food for animals, humans, for fiber, and energy. Surprisingly, exports of Michigan soybeans are larger than corn, increasing to $589 million in 2010 alone.

So the next time to drive past a soybean field, I hope you will share with your travel partners all the uses of Michigan soybeans. If you want to learn even more, including free access to a classroom-based curriculum for 3rd – 5th grades, visit the Michigan Soybean Promotion Committee website at www.michigansoybean.org.