Which way is she laying in bed?

Cows often comment on the comfort of free stalls if we know how to interpret their actions. Cow stall comfort is critical for healthy, productive cows.

During a recent walk through a barn, I saw three heads hanging over the back curb of the stalls as I looked down the barn row. That’s not what we want to see. It tells us something is so wrong with the stalls that cows have turned around before lying down. Some people say “stupid cows”. Actually, the cows know a problem exists and are trying to tell us about it if we can interpret their language.

As a Michigan State University Extension educator, I get called by dairy producers with problems. One producer had called because heifers that had just calved were not using the stalls. They were lying in alleys and outside. That is another cue something is wrong with the stalls.

The problem in this case was that these stalls, in a barn built in the late 1960’s, were too short to be comfortable. Certainly, dairy cows on many farms have become larger over the years, and we’ve also learned more since that time about the space cows need.

These stalls measured 86 inches from the back of the curb to a solid wall in front of them. According to Penn State agricultural engineers, 1,300–1,500 pound cows need 102–108 inches of total stall length for closed-front stalls, or for cows 1,500–1,700 pounds, a stall length of 108–114 inches. So in this case, stalls were nearly two feet short.

To do that, they often lean against the stall dividers, bending or breaking the stall attachments to make the stall wider. The next stall is narrowed by the same action. This barn clearly had evidence of stall dividers pushed one way or the other. Ultimately, some cows created enough space to even turn around, facing the scrape alley. Now they had space to lunge forward.

Uncomfortable stalls are a problem for several reasons – cows will be less likely to lie down, or to get up to eat once they are down. They will likely spend more time in idle standing, putting pressure on their feet. Thus, it is likely they will eat less and produce less milk.

But what can be done in a barn like this? Many producers are not ready to walk away from it as a cow barn. However, one alternative is to build a new cow barn with recommended stall design and use the old barn, with the short stalls, for heifers. 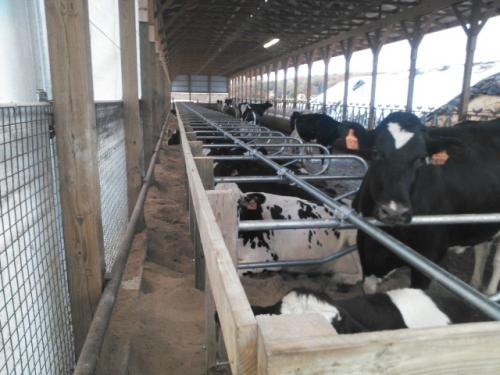 Another solution I have seen is to build a new wall outside the current one as illustrated in photo accompanying this article. Often the posts on which the stall dividers are hung can be left in place and the wall between the posts is removed. Cows now have lunge room in the space created by a new wall two feet out from the old.

There are several variations of this plan depending on the current structure. If the old posts are sound structurally, then the new posts do not need to bear the roof load and can be spaced further apart. They will bear only the short roof extension. Alternatively, the new wall could bear the weight of the roof and the old posts cut off above the stalls.

Sometimes, the new wall is also the opportunity to hang a curtain sidewall that will improve ventilation in the barn, as well as stall comfort.

Producers who have added the new wall and thus extended their stalls have reported cows respond well to the added stall length with increased use and improved performance.

It is easy for producers to take things for granted and assume their barn is providing adequate cow comfort. However, the behavior of the cows will tell the truth if we are willing to listen. If cows are not properly using stalls they are telling you it is time to re-evaluate stall comfort and take your tape measure out to the barn. Penn State University has stall designs and dimensions that can be a useful tool in creating a stall comfort redesign on your farm.

The Five Freedoms: A history lesson in animal care and welfare