Why are my apples blooming during fall?

Stresses such as drought, which causes growth to stop and start, can confuse woody perennials and cause out of sync bloom.

Some homeowners and commercial growers have reported apple trees blooming this fall instead of the normal time in spring. Michigan State University Extension educators hypothesize a transient drought stress occurred this summer, causing some tree growth to slow or stop. Growth resumed later in the summer when renewed rain and increased root growth relieved this stress. When growth started, some of the flower buds which would normally bloom next spring began to grow and develop as they would in the spring and bloomed this fall.

Floral initiation also varies on the same tree. You can think of waves of floral initiation. In order for the bud to receive the induction signal and initiate conversion to a flower bud, it must have already developed to a certain stage. One of the primary requirements is that the bud is not actively growing. These buds are located either in the axils of the leaves or at the tips of shoots that have stopped growing. In stone fruit, such as cherries and peaches, there are only flowers in the flower buds. Apricots and peaches have only single flowers, while cherries and plums have flower clusters with several flowers. In stone fruit, the fruit buds are located in the axils of leaves. In apples and pears, the flower buds contain both flowers and leaves in the bud. In apples and pears, the flower buds are generally located at the shoot tips or on short branches called spurs, or more formally, a “bourse.” 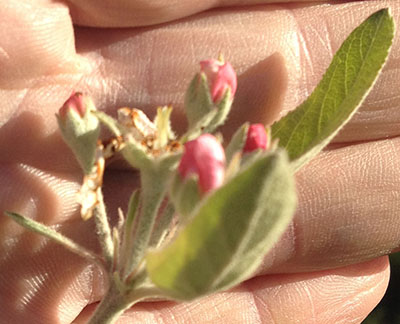 This flower cluster formed at the tip of an actively growing shoot. This is highly unusual and the different flower parts (petals, stamen and pistil) are poorly developed in comparison to normal flowers. Photo by Bill Shane, MSU Extension. 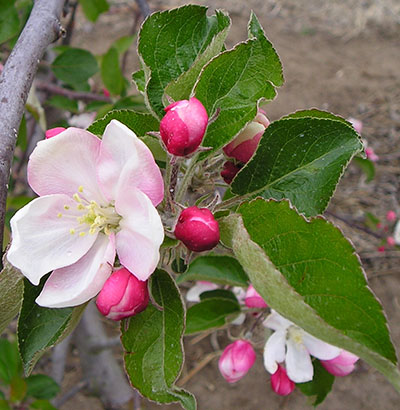 Note that the central ‘King’ bloom opens just before the side blooms open. All the flower parts are well developed as well as the leaves, which all form the fruiting bourse. Photo by Mark Longstroth, MSU Extension.

Normally, the initial development of the flowers within the buds is completed before the tree enters dormancy in late fall. There are several types of dormancy in plants. Ecto-dormancy is when the external conditions are not good for growth (ecto is Greek for outside, external). This can be brought on by drought or the short days and cool temperatures of fall. Later, the trees enter endo-dormancy and internal factors limit growth even when conditions are good for growth.

During the winter in endo-dormancy, the tree tracks temperatures just above freezing to monitor the progress of the winter. This tracking of cold temperatures is called chilling. (See “Winter dormancy and chilling in woody plants” by MSU Extension for more information.) The chilling requirement usually prevents the tree from beginning growth during warm periods in the fall and winter. There can be further development of the buds if the winter is warm, but the buds do not flower until after the tree begins growth. After the tree passes through winter, flower development within the bud is completed in spring as growth begins.

So what caused flower buds, which are normally quiescent at this time in the season, to begin growth and bloom this fall rather than stay dormant through their winter chilling?

It is not unusual to see bloom in trees that have been drought stressed in summer and then get good moisture later in the growing season. This year, most of Michigan had a fairly wet spring with abundant rainfall early, not a drought. Trees grew very well in spring and developed a thick canopy of leaves. However, because Michigan received so much rainfall, the soil had lots of moisture this spring. Root systems did not need to be very large to supply enough water for the tree’s shoot and leaf growth development during cool springtime conditions. Later in the season – mid-July to mid-August – warm, sunny, dry weather, often with winds, greatly increased the tree’s demand for water.

These conditions could have quickly exhausted the available soil moisture in the surface soil where most of the roots are up-taking water. Remember, these root systems were small at the beginning of summer because plenty of moisture was available in spring and roots did not need to grow. Therefore, the tree would have needed to grow new roots deeper in the soil. While the tree’s energy was focused on below-ground growth, growth above-ground would have slowed or stopped. Later, when water was abundant again, growth resumed. Some of the flower buds received a signal to start growth and, thinking it was spring, finished their development and bloomed.

Remember that not all flower buds develop equally or at the same time. Perhaps some were far enough along to finish their development normally, but had not yet developed a good inhibition to continue growth and bloom without a winter dormant period. In this case, a signal was misinterpreted and flower development, which should have slowed, was turned back on and the flowers developed as they would in spring and bloomed in fall. Many of these flowers did not look normal, indicating abnormal development.