Why are we seeing so few Japanese beetles this summer?

So what did happen? Most likely, we are seeing fewer Japanese beetles in areas where the soil was dry last year in July and August. Japanese beetle grubs do not survive well in dry soils. If it was very dry last July and August, the adult beetles would try to avoid laying eggs in the dry turf and soil, and if it was moist when they layed eggs, then became very dry later, the grubs did not survive. Since adult Japanese beetles fly around an area the size of two football fields or more, then all the turf within an eighth of a mile of your house could be producing beetles that will find their way to your lawn and garden. If most of that turf was dry last year, then few beetles emerged this summer.

Another thing that happened this summer is the cool weather. At cool temperatures, beetles are not as active as during warm temperatures. So, even if we had the same number of beetles, you would see less activity during a cool summer.

But this idea that Japanese beetle grubs survive best in moist soil means that they will survive well this summer and fall, so lots of beetles will emerge next summer, probably much more than what we saw this summer. 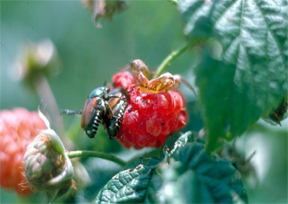 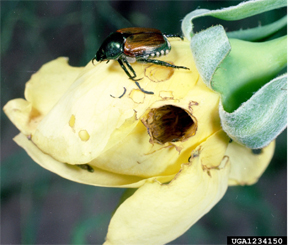