Many environmental factors are at play in the Great Lakes, which may plan an important role in determining the future success of lake whitefish spawning. 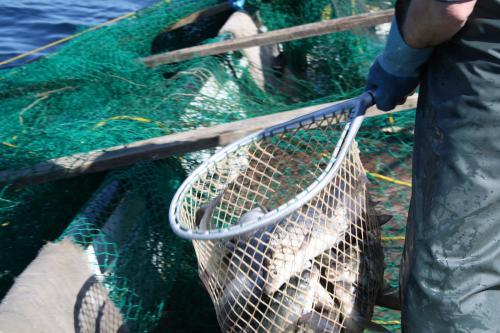 managed fisheries is caught by small, family-based operations. The commercial catch is processed locally, making it an important economic component to local coastal communities. Any changes to this fishery could have negative economic effects on these communities.

To recruit to the fishery, a lake whitefish must survive a treacherous journey from the egg to larva to juvenile and finally to the adult phase. It is important to know how many lake whitefish enter the fishery so it can be determined how many can be harvested without negatively impacting future populations and harvest. This research project examined climate factors, specifically temperature, wind, and ice cover, which have been shown to influence recruitment of lake whitefish to the commercial fishery. Because lake whitefish spawn in the fall and hatch as larvae in the spring, these times are particularly critical to the survival of lake whitefish. Historical data was used to model how changes in these climate variables affected recruitment. Earlier research has observed a positive relationship between recruitment and spring temperatures and ice cover, and a negative relationship between recruitment and fall temperatures and fall wind speed. This research confirmed these same patterns. Warmer spring temperatures may improve survival of larval lake whitefish if food resources are available, and increase lake whitefish production in the Great Lakes. However, warmer fall temperatures, more wind and less ice cover may inhibit egg survival and, consequently, lake whitefish production. 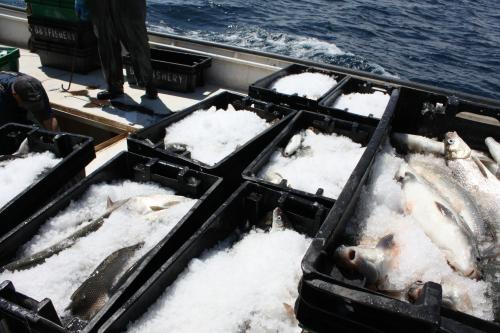 The relationship between climate variables and lake whitefish recruitment has significant implications for the fishery in the context of climate change. By the end of this century, the Great Lakes region could be warmer, windier, and experience less ice cover. Surface temperatures for the Great Lakes, for example, could increase by as much as 7 degrees Fahrenheit. So, is this just another “doom and gloom” climate change story where a species will be ousted by habitat changes, or, perhaps could warmer temperatures be good for this coldwater fish?

Using the climate-recruitment model, this research project was able to project anticipated impacts on lake whitefish recruitment using their climate-recruitment model and a downscaled climate model developed for the Great Lakes for the 1836 Treaty Waters of Lakes Huron, Michigan, and Superior. The 1836 Treaty Waters currently sustain a highly productive lake whitefish fishery, approximately 25 percent of the whole fishery in the upper Great Lakes. Recruitment projections varied between management units; some experienced up to a 50 percent decline and others had as much as a 220 percent increase. Overall, this research suggests that there is potential for increased lake whitefish recruitment in the Great Lakes with climate change, and some shift in the distribution of the fishery.

For more information on this research project, visit the Climate Change and Lake Whitefish Project page within the Michigan Sea Grant website.

U.S. National Climate Assessment reports on the science of climate change and its impacts

How is the water cycle affected by climate change?

Working together to improve natural resources

Climate variability and change and its Impacts on Michigan water resources