Will my turf recover from spring flooding?

Recent rainfall events caused flooding in many lawns and other turf areas. Unless flooding was accompanied by soil deposition, most turf areas should have minimal damage.

In the last week, melting snow and heavy rain have resulted in streams and rivers overflowing their banks and flooding in many low-lying areas. The water is slowly starting to subside and although I don’t expect damage to turf at this time of year, it is possible. Factors that determine turf survival under water include turfgrass species, submergence duration, submergence depth, water temperature and light intensity.

Turfgrass species differ in their ability to survive flooding. Unfortunately, there are no hard fast numbers such as Kentucky bluegrass will survive five days and creeping bentgrass 15 days under water. Instead, species have been assigned relative submersion tolerance ratings: creeping bentgrass–excellent; Kentucky bluegrass–medium; Poa annua and perennial ryegrass–fair.

As submergence depth increases, the potential for injury increases. If the leaf tissue is above the water line–even just a little bit–the turf will probably survive. On golf courses, many have observed creeping bentgrass floating on the edge and even growing out into a lake. This is a perfect example of turf surviving when partially submerged.

The final two factors affecting turf survival are water temperature and light intensity. Both of these factors are working in our favor right now as the air and water temperatures have been cool. Flooding during the summer months when temperatures are higher often result in damage to the turf when it’s submerged for even a short time.

At this time of year, turf has not started to grow yet, so discoloration from flooding is unlikely. Once turf starts growing, flooding may cause the turf to turn yellow or brown. The discoloration is related to the turf losing its ability to take up nutrients. It doesn’t take long once turf is submerged for soil oxygen levels to decline and root hairs to begin to die. As the root system becomes impaired, nutrient extraction and water uptake will be limited. Keep this in mind once the water has receded as the turf may benefit from a light fertilizer application. 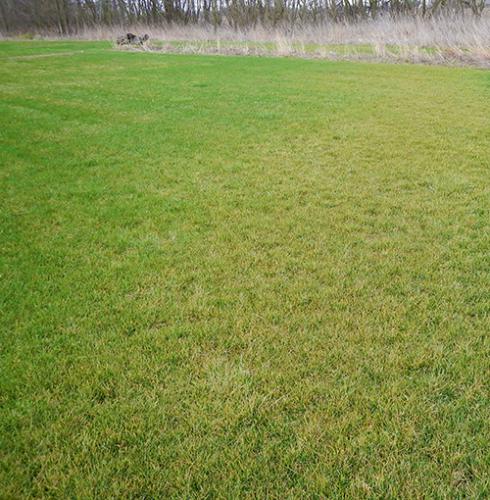 To assess if submersion has caused injury, Michigan State University Extension advises extracting several plants from the flooded site and cutting a horizontal cross section through the crown. If the crown is white and firm, it has survived. If the crown is brown and mushy, it’s dead, so time to develop a reestablishment plan.

Finally, for those areas that were flooded due to a stream or river overflowing a bank, you are probably dealing with silt or soil deposition. Removal of soil deposition can be difficult and seeding into the deposited soil can be an option. Once you’ve successfully reestablished soil, cultivation such as core aeration or slicing will benefit the turf by breaking through deposited soil layers to facilitate rooting and water infiltration.

Pinkish-red strands in grass could be red thread