Winterkill reestablishment on golf courses should be slow and steady

Golf courses recovering from winterkill continue to be a slow process due to cool spring weather.

Unfortunately, the recovery from winterkill seems to be following the common saying of slow and steady wins the race. The recent temperature spike in the last several days has certainly helped the recovery, but the forecast is a roller coaster with highs ranging from 50 to 70 and even whispers of a possible frost event before the end of the week.

Statewide temperature ranks provided from NOAA National Climatic Data Center (NCDC) indicate the period of February-April to be among the coldest on record for Michigan. Temperature ranks for Michigan in April were classified as near normal, but based on data from the last 120 years, I would suggest it was closer to the below average rank. In April, Michigan’s temperature rank was 46, indicating that of the 120 years of data, 45 years had cooler temperatures and 74 had warmer temperatures.

In a typical year where winterkill reestablishment wasn’t an issue, these temperatures probably wouldn’t have been much of an issue. However, this year it was definitely not ideal for establishing turf on putting greens. 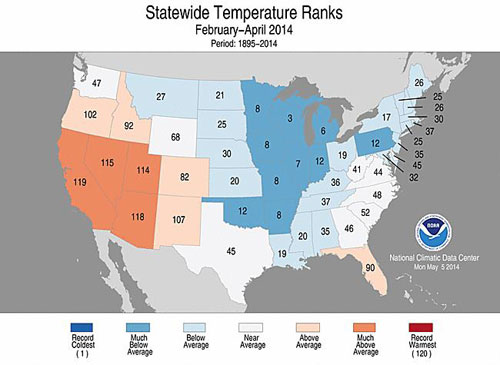 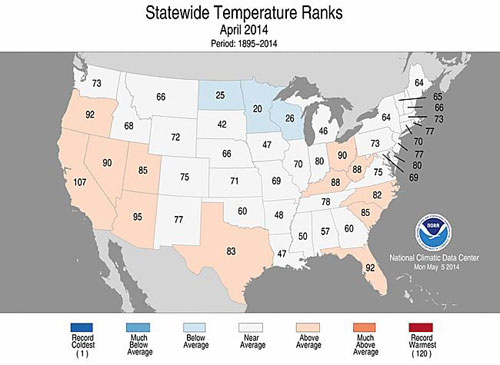 On April 7, 2014, I took a picture of an area of Poa annua at the Michigan State University Hancock Turfgrass Research Center that had winterkill. At that time I was attempting to assess survival of Poa annua displaying different colors. 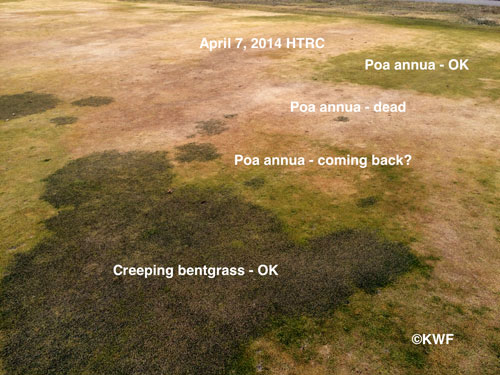 The picture below was taken on May 13. As the picture indicates, the areas of Poa annua that I thought might survive did survive and have now filled in with living, breathing Poa annua. Unfortunately, the areas that I thought were dead still appear dead. In some of these severely damaged areas of Poa annua, we are observing some recovery, but it’s doubtful that without seeding creeping bentgrass into these areas, recovery will be sufficient. 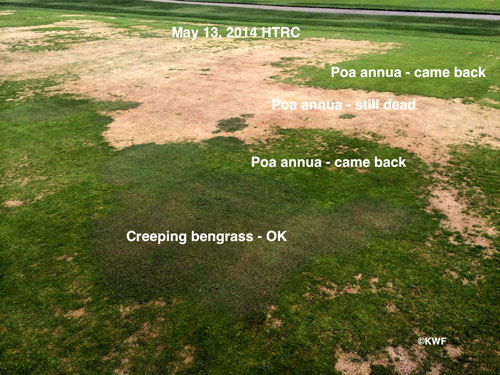 Reestablishment and opening greens for play

Temporary greens are still in play on many golf courses and, as expected, the pressure to play greens is only increasing. Many golf courses had planned or hoped to open severely damaged greens that had to be reseeded by June 1. Although every course differs in how quickly they are recovering, the June 1 date now appears somewhat unrealistic for the most severely damaged greens.

One of the most common questions is “How soon can we play the greens?” My typical response is that when we establish greens, which is essentially what we’re doing, we don’t go from seed to play in 45 days, which is approximately what a June 1 target date would mean. 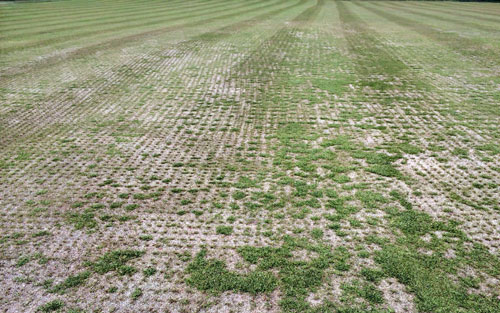 Michigan State University Extension suggests assessing each green individually and open greens as soon as you determine they are ready for play. Of course the logistics and pressure of making these decisions can be immense as golfers may “suggest” that you open a series of consecutive greens to allow for consecutive playing of holes or facilitating posting nine hole scores for handicap purposes.

The concern with trafficking newly seeded greens too soon is that the turf will lose density and the greens will essentially go backwards in terms of turf cover. Ultimately, this could lead to turf thinning and loss that by July and August may result in golfers playing on a mix of bare soil, algae and moss.