Learn the life history of perch, as well as how to find and catch them no matter what the season.

Michigan State University Extension and Michigan Sea Grant have been actively engaged in education relating to the Great Lakes fishery for more than 35 years.  This is the second of two articles focusing on the yellow perch, one of the most popular and important fish species in the Great Lakes. (Read Part One.)

The yellow perch (Perca flavescens) is found throughout North America, from Nova Scotia in the north, to Florida in the south, and from the Atlantic to the Pacific oceans. In Michigan, they are found in the bays and shallows of the Great Lakes as well as in inland lakes and ponds. Perch are usually a shallow water fish, most often found in less than 30 feet of water, but may be found deeper than 100 feet, particularly in summer. Young perch can be found closer to shore and in shallower water than adults.

Young perch often mix with other small fishes in schools (large groups of fish swimming or feeding together). Adults are often in schools of 50 to 200 or more fish, staying closer together in summer than in winter.

Perch prefer water temperatures of 66°F to 70°F, although they are found in a variety of water temperatures. They are most numerous in the open waters of lakes which have some weeds, clear water and bottoms of muck, sand or gravel.

Male perch usually are mature at age 3 and females at age 4. In the spring, when water temperatures reach 44°F to 54°F, perch spawn in lake shallows or rivers which drain into lakes. Spawning usually occurs near aquatic plants or other cover. Perch spawn at night or in the morning, but don't make nests. Females lay an average of 23,000 eggs in a jellylike mass up to 7 feet long, and the eggs usually hatch in 8 to 10 days. The young are inactive for the first 5 days while they absorb their yolk. After that, they grow rapidly, although the rate varies with habitat and population size.

Perch feed from morning to evening throughout the year. Their diet depends on the season and their size. Their main foods are aquatic insects, other invertebrates and the eggs and young of other fish. They themselves are eaten by almost all predatory fishes found in the same waters, including other perch. Many species of water birds also prey upon perch.

Since perch feed year round, they are taken through the ice as well as during the warmer months. In the spring and fall, most successful anglers focus on shallow waters 4 to 8 feet deep and move to deeper water in the summer. The greatest perch fishing successes come around submerged weed beds or rocks. Preferred tackle is the "perch rig," made up of a sinker on the end of the 2- to 10-pound line. The perch rig has two hooks (#6 to #8) about 18 inches apart that are attached above the sinker.  Anglers usually still-fish for perch using minnows, wigglers or worms as bait. 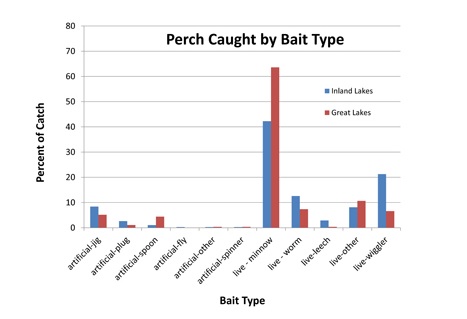 The perch nibble at a baited hook since they have no canine teeth, so anglers must watch carefully for the gentle bite, set the hook firmly and keep steady pressure on the line as they bring it in. Although perch are not known as great fighters, their abundance and great taste more than make up for their gentleness!

Before you head out to catch your limit of perch, regardless of the time of year, remember to purchase your Michigan fishing license and get a copy of the current Michigan Fishing Guide, in which you’ll find information on fish identification (also see What’s that fish? The (dichotomous) key to fish identification), regulations for perch and all other sport species in Michigan waters, the Master Angler program, and much more.

Read Part One in this series.

Michigan has a viable and sustainable bait industry