Although weeds can be controlled solely by mechanical means in young switchgrass stands, a preemergence herbicide application may produce higher initial yields. 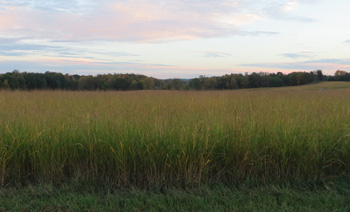 One of the advantages of switchgrass as an energy crop is that relatively few inputs are required to establish and maintain a healthy, productive stand. However, controlling weeds during switchgrass establishment is essential. Both mechanical and chemical approaches can provide acceptable control, but their impacts on biomass yield in the first and second year after planting differ significantly.

A recent research study conducted by Michigan State University Extension compared two popular methods of weed control in switchgrass to evaluate this effect. One method avoids using herbicides and relies instead on mowing to keep annual weeds under control and prevent production of seed that might cause problems in subsequent seasons. The second method is to use herbicide to control weeds at the time of planting. For our study, switchgrass was established in six Michigan counties in 2009. Four of the sites were mowed for weed control (Barry, Cass, the Kellogg Biological Station and Ottawa) and two (Isabella and Saginaw) received an application of 5.3 oz/acre quinclorac + 1.0 #/acre atrazine in 2009 at planting time. No mowing or herbicide applications were made in successive years. Yield data was collected from each site for the past four years and is summarized in Table 1.

* Plots were mowed in year 1 for weed control, resulting in no harvestable yield.

In 2009, Barry, Cass, the Kellogg Biological Station (KBS) and Ottawa plots were mowed twice during the growing season (June, August) to control weeds. Due to mowing these plots, there was no harvestable yield to be taken in November 2009, resulting in the loss of one year’s production. In the same year, Isabella and Saginaw produced relatively good yields that were harvested in November.

In 2010, the Isabella and Saginaw locations were the top yielding sites again, although KBS was not far behind. By 2011, the mowed plots had caught up to the sites that received herbicide and no significant difference was observed. This was true for 2012 as well, though yields last season were lower overall due to drought.

Comparing these weed control methods from year to year would lead you to believe that even though the mowing treatment lagged in yield during the establishment phase (2009-10), the switchgrass was eventually able to develop into a productive stand with yields similar to the herbicide treatments (2011-12). However, when you sum the yields for the four year period, a different trend appears. The herbicide treated plots produced an average of 18.18 tons per acre between the two locations while the mowed plots produced an average of 13.66 tons per acre, a difference of 4.52 tons. This additional yield is more than enough to cover the cost of an herbicide application in the establishment year. Table 2 shows the yield summary and comparison between treatments.

There are two take-home messages from this research:

1) Mowing is a viable way to control weeds and successfully establish a stand of switchgrass and,
2) Herbicide application to control weeds produced more total biomass during the first four years of the stand.