Teach students about science by playing in the river! You can learn about the health of a river by studying the dissolved oxygen of the water and how it changes.

This is the second article in a series by Michigan State University Extension about testing water quality with students.  By conducting some simple tests, students can learn about how clean or polluted nearby streams are.  Further investigation can lead to students identifying the problem and help improve the river. Global Rivers Environmental Education Network (GREEN) is an international program that began in the spring of 1984 due to a group of concerned students at a high school in Ann Arbor, Michigan located along the polluted Huron River. They were able to develop a comprehensive educational program called GREEN, from help of University of Michigan professor, Dr. William Stapp. This series discusses the water quality tests conducted as part of GREEN.

Dissolved oxygen (DO) is critical for the animals that live in the water.  Just as land-based creatures need oxygen to live, so do aquatic animals.  The more oxygen dissolved in water is usually better for aquatic life.  You typically have the greatest diversity of life in waters with high levels of dissolved oxygen.

Oxygen also enters the water directly from the air.  Moving water and wave action mixes and dissolves oxygen into it.  Waterfalls and rapids tend to increase the amount of oxygen in water.

As water heats up, gases are driven out of the water.  For example, a can of soda pop has carbon dioxide gas dissolved in it, which we call carbonation.  As the pop heats up, the carbon dioxide is driven out and the pop goes flat.  Warmer water will have less oxygen in it than colder water.

This is one of the more difficult tests to conduct, and most people do not already have the equipment and chemicals for it, such as titration burettes, ground glass stoppered bottles or sulfuric acid.  If you partner with a local high school chemistry lab and instructor, you can conduct a full-blown Winkler test, but that may be more difficult for individuals without a chemistry background.

Where you get your water and how you collect it for dissolved oxygen is important.  Make sure you fill and cap your sample bottle under the water.  After it is capped, if there are air bubbles in the sample, you need to collect it again.

Try to collect water in the middle of the stream – not too close to the top, bottom or edges. Try to get the sample in a portion of the stream that “looks” like the rest of the stream, with the same speed and amount of rocks.

After you conduct the chemical testing, you will get a dissolved oxygen reading in ppm or parts per million.  Because the amount of oxygen water can hold changes on temperature, you need to use the chart below to determine the percent of saturation of oxygen in the water. 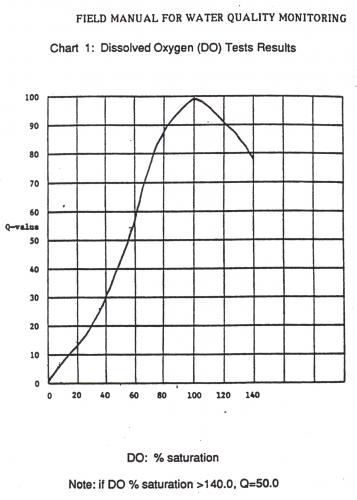 If your dissolved oxygen reading is under 90 percent saturation, you might want to figure out why.  Here are some common reasons:

Birdwatching is a great way to spring into science