The Asian longhorned beetle is a large wood-boring beetle native to China and other Asian countries. Its scientific name is Anoplophora glabripennis (Motchulsky) (Coleoptera: Cerambycidae). It is not currently known to be established in Michigan, but populations of this beetle are established in New York and Chicago. Larvae of the Asian longhorned beetle feed in many kinds of trees, including important ornamental and forest species. This bulletin is designed to provide you with information about the beetle and how to recognize it. 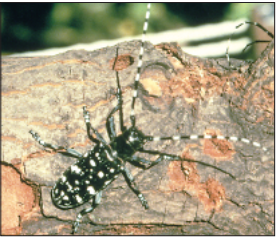 What’s all the fuss about?

The Asian longhorned beetle is an exotic insect — it is not native to North America. It was discovered infesting trees in two cities on Long Island, New York, in 1996. Other populations were found in suburban Chicago in 1998, New Jersey in 2004 and Toronto, Ontario in 2003. Larvae of the Asian longhorned beetle feed in the wood of tree branches, stems and large roots. The large tunnels (galleries) created by larvae can cause branches or stems to break and can eventually lead to tree death. Because the insect is not native to North America, it has no known natural enemies here, and our trees have low resistance to this pest. Currently, trees that are known to be infested with Asian longhorned beetles must be cut down and destroyed, a process that is often distressing for residents in affected areas. Many scientists and regulatory agencies are working together to locate any existing populations of this beetle and to try to prevent new populations from becoming established.

Where is the Asian longhorned beetle found?

The Asian longhorned beetle is native to China, Korea and Japan. Therefore, entomologists expect this beetle to be able to tolerate a wide range of weather conditions in North America. It could probably survive at latitudes ranging from that of Cancun, Mexico, to northern Wisconsin.

How did the Asian longhorned beetle get into North America?

Most experts believe that the Asian longhorned beetle was accidentally introduced into North America from China in wood crating, pallets or wooden “dunnage” — the wooden logs and braces used to support cargo during shipping. Once trees were infested, however, tree trimmers may have moved sections of infested wood from one city to another, resulting in at least one additional infestation in New York.

This is a large, handsome beetle sometimes called the “star sky beetle” in Chinese literature. The adults are shiny black with white spots on the upper and lower body, and about 1 inch long and 3 ⁄4 inch wide. The antennae are very long, with alternating black and white bands. Larvae are plump, white to pale yellow grubs. The legless body is round. Larvae will be found in the wood of tree branches, stems or large roots. Young larvae are small, but older larvae can be 11 ⁄2 to 2 inches long. 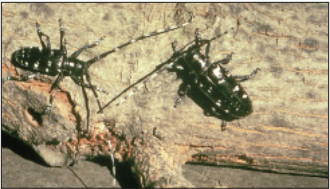 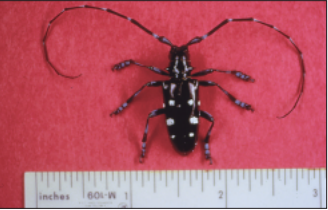 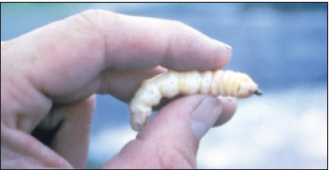 Larvae are white or yellowish grubs that may reach a length of 11 ⁄2 to 2 inches. 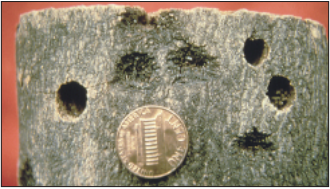 Two oviposition (egg-laying) pits (above the penny) and round exit holes where adult beetles emerged.

An adult beetle lays a single white egg in each oviposition pit. 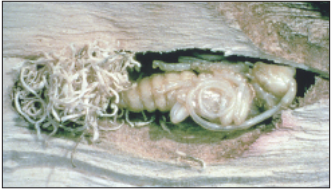 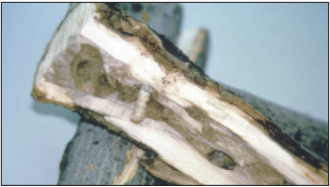 Larvae feed in tunnels (galleries) in the wood of the branches, stems and roots.

What is the life cycle of the Asian longhorned beetle?

Adult beetles are usually active from May to October, with peak activity occurring in midsummer. After mating, a female adult chews a round or oval pit through the outer bark and into the cambium area between the bark and the wood. She then deposits an egg under the bark at the bottom of the pit. Adult beetles live for several weeks, and each female can lay from 25 to 40 eggs during her lifetime. The eggs hatch within 1 to 2 weeks, and the young larvae feed in the cambium area, just under the bark. Older larvae tunnel deeper and feed in the wood. Larvae periodically push coarse sawdust and fecal particles out of their galleries. The larvae spend the winter in the wood. They pupate in late spring or early summer, and the new adults emerge from the tree in early to midsummer. The large adults each leave a round hole in the tree where they emerge. Young adults will feed on the bark of twigs and small branches in the summer before mating. The Asian longhorned beetle generally has one generation per year, although some beetles require two years to complete their development. 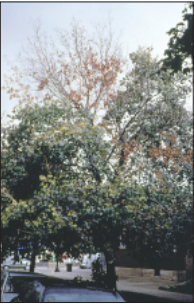 The branches in the upper canopy of this tree are infested with Asian longhorned beetles and are dying.

What trees will the Asian longhorned beetle attack? 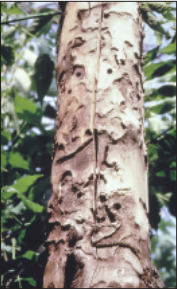 A box elder tree that was heavily infested by Asian longhorned beetles. The bark was removed to show the larval galleries.

What does the Asian longhorned beetle do to trees?

Tree damage is caused mainly by the larvae feeding in tunnels in the sapwood and heartwood of the tree. An individual tunnel, called a gallery, may be 4 to 6 inches long and 1 ⁄2 inch wide. High numbers of galleries or repeated attacks will eventually kill individual branches or even whole trees. Branches and trees with high numbers of galleries are also likely to break in strong winds. Feeding by adult beetles on twigs and small branches can cause some small twigs to die. These small wounds and the pits chewed out by egg-laying females could also lead to infection by tree diseases. 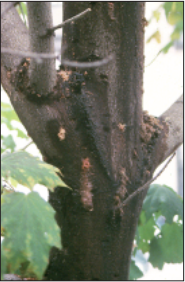 How can I tell if a tree is infested with the Asian longhorned beetle?

When an adult Asian longhorned beetle completes its development and emerges from a tree, it leaves a round hole about 3 ⁄8 inch in diameter. These round holes can be found anywhere on the tree, including branches, the trunk or large exposed roots. Piles of coarse, sawdust-like frass may be found in the crotch where a branch meets the main stem or at the base of an infested tree. Sap may run from the wound, darkening the bark of the tree. You may also be able to find the small round or oval pits in the bark where adult females laid eggs. When an infested branch or stem is cut and split open, the tunnels created by the feeding larvae will be present in the wood. Asian longhorned beetles often seem to infest the same portion of the tree year after year until that area dies or breaks off.

Don’t we have similar kinds of native beetles?

Yes! There are many species of longhorned beetles in North America. These native beetles also feed in tunnels in the sapwood of many kinds of hardwood and conifer trees. Pine sawyer, for example, is a common beetle found in most pine forests in Michigan. Other native species include the sugar maple borer, the locust borer and the poplar borer. Entomologists can help you distinguish between native wood-boring beetles and the Asian longhorned beetle. 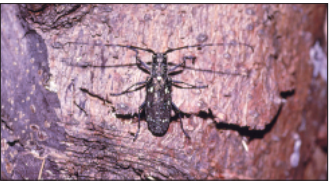 Many native species of wood-boring beetles also occur in North America. This white-spotted sawyer is common in conifer forests.

Can the Asian longhorned beetle be controlled?

What is being done to prevent the establishment of new populations of the Asian longhorned beetle?

Federal and state regulatory agencies regularly inspect ships, crates and dunnage at shipping ports and warehouses throughout the state. These inspections are designed to detect new populations of exotic pests before they can become established. Traps and trap logs are often used to help regulatory personnel find wood-boring beetles, bark beetles and other pests likely to infest crating material and dunnage. Inspectors are trained to carefully examine crates and other wooden material that is shipped from Asian countries to ensure that this material is not infested by the Asian longhorned beetle. Information on the Asian longhorned beetle, including color photos, has been provided to warehouse operators and importers to enlist their assistance in detecting new Asian longhorned beetle populations. In addition, regulations recently took effect that require crates and dunnage shipped from China to be free of bark and kiln-dried or fumigated to reduce the risk of future introductions of wood-boring pests..

Is there anything that I should be doing?

Keep your eyes open! Residents of Michigan should learn what Asian longhorned beetles look like and how to recognize trees damaged by this wood-boring pest. Arborists, urban foresters and landscapers should be especially vigilant — this beetle may be more likely to be found in urban trees than in forest stands. If you think you may have found an Asian longhorned beetle, contact your regional Department of Agriculture office or your county MSU Extension office.