This disease may begin with yellowing and dieback on a single branch. As the infection spreads, wilting and yellowing of foliage, as well as dieback spreads throughout the crown. Dead leaves remain on the tree. Symptoms are more noticeable when the weather turns hot.

Drought-stressed trees are more susceptible. The fungus travels within the sapwood of the tree, causing brown streaks; it can be spread from infected trees to healthy ones through root grafts, and by bark beetles carrying spores. 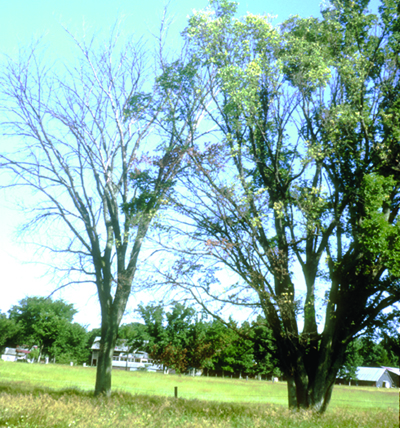 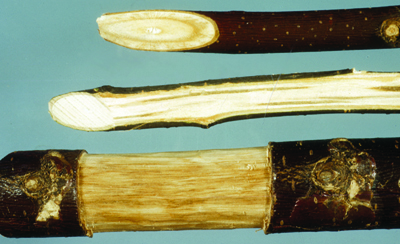 Brown streaks, which are visible in the sapwood of infected trees. The pathogen can remain alive in the streaked wood for extended periods of time.

Sever root grafts between diseased and healthy elms. Systemic fungicide injections in conjunction with sanitation pruning (The removal of large limbs at the first sign of the disease.) may be warranted for valuable specimens if symptoms have not progressed too far, but should only be attempted by a qualified arborist. Cut dead trees immediately and remove bark from any elm logs kept for firewood to prevent its use as a breeding site by elm bark beetles. 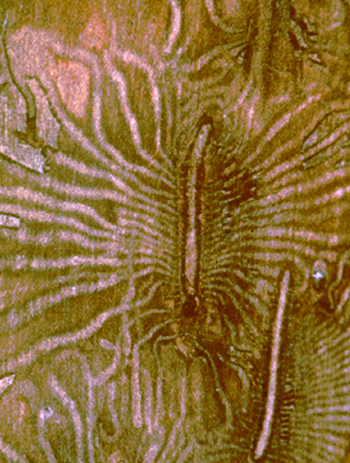 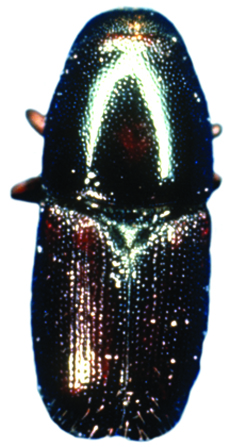 European elm bark beetle, (shown below) and the native elm bark beetle are vectors of the fungus that causes Dutch elm disease. The beetles deposit spores as they bore into cambium and sapwood and lay eggs in galleries that they create in the wood under the bark.

Elms vary widely in their susceptibility. ‘Regal’, ‘Urban’ ‘Sapporo Autumn Gold’ and ‘Pioneer’ are among the hybrids developed that show resistance. Most of the Asian species of elm are resistant.

Print a PDF of this page: Dutch elm disease.