The European chafer, Rhizotrogus majalis, is native to western and central Europe. It was discovered in the United States in 1940 when a grub was found in a nursery-growing area near Rochester, New York. Today, it has been reported from New York, New Jersey, Connecticut, Pennsylvania, Massachusetts, Rhode Island, Ohio, Michigan, Delaware and southern Ontario. In Michigan, the European chafer is now common through all of the Lower Peninsula. 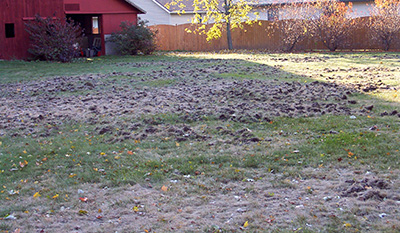 European chafer is most damaging when it first becomes established in an area. After four to 10 years, the population falls to a level that grubs might be detectable, but damage is unlikely. Most of the southern part of the Lower Peninsula is now in that situation. If damage has been observed or applications have been made to control grubs, sample several places in the lawn in September to see if there are enough to potentially cause problems.

Injury – where and when

European chafer grubs feed most heavily on grass roots from August to November and from March to early May. Even during the winter months, grubs may resume feeding during warm spells. Turf damage caused by grub feeding injury to roots is most severe under drought conditions, when water-stressed grass plants cannot grow new roots to replace injured ones. The damage is typically observed when the turf fails to turn green in early spring. In heavily infested areas, entire lawns may turn brown and die during prolonged periods of dry weather in fall or spring. Damage may also occur when skunks and raccoons feed on the grubs. 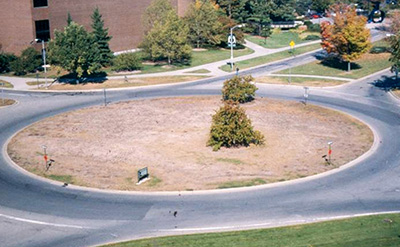 Most European chafer grubs complete development in one year, but a small proportion of the population may require two years to complete development. Adult beetles emerge from the soil between the middle of June and early July in Michigan and New York. Emergence may be two to three weeks earlier in southern Ohio, Pennsylvania and New Jersey. They fly on warm evenings (above 65 degrees Fahrenheit) for several hours beginning at sunset. This means that large numbers of them may be in an area and they would not be detected unless someone was looking for them. Adult activity peaks within two to three weeks of first emergence.

Eggs are deposited 2 to 4 inches below the soil surface on non-irrigated turf. First instar (or larval stage) grubs emerge from eggs in early August and molt to second larval stage instars by the middle of August. By Sept. 1, nearly all grubs are second instar (0.5 inch long), and by Oct. 1, most of the larvae are mature, third instar grubs (0.75 to 1 inch long). They continue feeding on turf roots until the soil surface freezes (usually sometime in November). 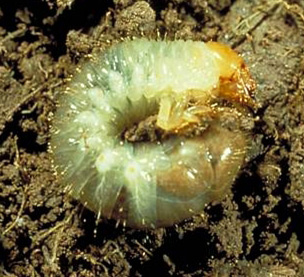 Overwintering grubs remain just below frozen soil. On average, 24 percent of the grubs do not survive the winter. Surviving grubs return to the surface as soon as the ground thaws, feeding on grass roots again in late winter and spring. By late May, almost all of the grubs move down to a depth of 2 to 10 inches to pupate. They remain as pupae for about two weeks before emerging as adults. Wet soil during pupation may cause high mortality.

Natural control of European chafer by predators, parasites and pathogens is excellent in Europe but poor in the United States. Several parasites, including four species of flies and two wasp species, have been released with little success. Natural enemies reported in the United States include two species of ground beetles that feed on grubs and eggs, a protozoan pathogen and a rickettsia pathogen.

Damage thresholds have been estimated at five to 10 grubs per square foot for low maintenance turf. Frequent irrigation during the last two weeks of June makes the turf much less attractive to the adult females for egglaying. Irrigation during the fall helps turf survive root pruning by grubs. Insecticides containing the active ingredients imidacloprid, thiamethoxam, clothianidin or chlorantraniliprole are very effective against grubs when applied in June to mid-July. These preventive treatments kill young grubs as they hatch, but do not work as well against larger, established grubs. Insecticides containing carbaryl or trichlorfon can be used as a curative treatment in late August, September, October, March or April.

Insecticide applications should be made after mowing your lawn to remove open flowers that might attract bees. All insecticide applications should be followed immediately with 0.5 inch of irrigation to move the insecticide into the thatch and root zone. European chafer grubs may not be as susceptible to some insecticides as Japanese beetle grubs. Always wear rubber gloves, long pants and rubber boots when applying insecticides. Store leftover chemicals in the original container out of the reach of children and pets.