What’s the difference between global warming and climate change?

“Global warming” and “climate change” often are used interchangeably, but they have different meanings. “Global warming” is the current and projected increase in average temperature near the Earth’s surface due to increased greenhouse gas levels in the atmosphere (scientists call this the “enhanced greenhouse effect”)1 . “Climate change,” however, describes shifts in long-term climate patterns, including air temperature, rainfall and snowfall (precipitation), and atmospheric circulation (weather patterns)2. Climate change is the more appropriate term for describing the range of past and future climate trends.

Isn’t climate change natural? Yes and no. Climate change is driven by both human and natural causes (see Figures 1 and 2). Humans affect climate change mainly by burning fossil fuels for energy and by converting natural land for human use, both of which emit greenhouse gases2. Natural factors, such as continental drift and changes in the Sun, have changed the Earth’s climate in the past3. Slight changes in the Earth’s orbit and tilting were responsible for past Ice Ages4, and volcanoes may have caused short-term climate changes5. But since the onset of the Industrial Age, humans have transferred the carbon stored in fossil fuels into the atmosphere as carbon dioxide gas (CO2) 2. This results in CO2 accumulating in the atmosphere faster than plants or the ocean can remove it4.

Carbon dioxide absorbs infrared radiation from the sun, trapping it as heat energy in the atmosphere4. Other human activities, such as agriculture, cause the release of other greenhouse gases such as nitrous oxide (N2O) and methane (CH4) 2. Please see MSU Extension Fact Sheets E3148 and E3149 for more about greenhouse gases and agriculture. 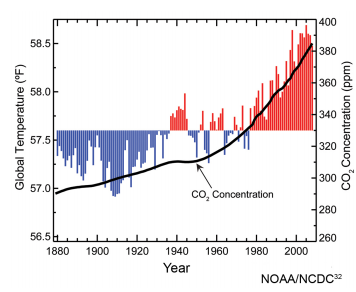 Would a few degrees warmer really make a difference?

Yes. Changes in the global average temperature, even small changes, can result in significant impacts. Over the past century the Earth warmed an average of 1.3 degrees Fahrenheit2 (see Figure 1). The consensus of the vast majority of climate scientists is that the Earth will likely continue to warm 2.0 to 11.5 degrees Fahrenheit in the 21st century2. While this may not seem like a great concern to our daily lives, regions around the world and within the United States will experience more extreme climate changes than others3. The U.S. Midwest has already seen an increase in temperatures. We can expect to see a decrease in air quality, increase in heat waves, more insect- and water-borne diseases, and heavier precipitation during the winter and spring8. Just a few degrees’ increase in average temperature can drastically alter the physical and life cycles of the Earth.

If it’s hard to predict the week’s weather, how can we project climate change?

There is a fundamental difference between weather predictions and climate projections. “Weather” represents local atmospheric conditions such as humidity, temperature, and precipitation for a short time period. “Climate” explains the atmospheric trends over a much longer period, usually 30 years or more9. Short-term predictions of weather are based on current conditions, which are rapidly shifting10. This is why weather forecasts are more reliable for a few days than a few weeks11. Climate projections, on the other hand, are based on long-term future scenarios, and do not rely on the variability of current weather conditions.

What are global climate models? Are they reliable?

Global climate models are a mathematical representation of past and future climates, based on climate scientists’ best knowledge of what factors affect the climate. These computer-based models project the Earth’s climate system’s response to external factors such as sunspot variability and internal factors such as anthropogenic and natural emissions of greenhouse gases12. Global climate models are able to reliably simulate past and present climates4. Scientists are careful about how they communicate the results of climate models because they cannot yet project small regional changes with accuracy. As scientific knowledge and technologies improve, local projections of climate will also get better. 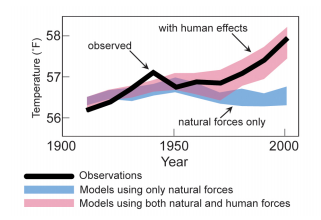 Do scientists disagree about climate change?

Nearly all climate scientists agree that the global climate is changing and its cause is human related13. Climate science is a long-established scientific field that is based on the basic laws of physics and chemistry14, and over 95% of Earth scientists (including climate scientists) agree that humans contribute to climate change15. Most of the debate between scientists occurs over the extent to which the climate will change and the degree to which humans will have an impact on the future climate.

Can we stop climate change?

Due to the increased levels of carbon dioxide and other greenhouse gases in the atmosphere, some of the impacts of climate change already are in motion. That means that warming of the atmosphere will continue even if we stopped all greenhouse emissions tomorrow. However, it is possible to stabilize our emissions through political and behavioral choices as well as with new technologies. As noted by the National Academy of Sciences, setting lower emissions goals is largely a social choice based on how we judge the risks of climate change16. Scientists, policy-makers, and stakeholders must work together to determine the risks from different greenhouse gas emissions scenarios, and the costs of implementing change. Our actions now will determine how future generations can respond to the challenge of climate change17.

How can we act in the face of uncertainty?

Staying informed by seeking out multiple sources of information is key. In addition, we can create plans of action that reduce negative impacts while creating and taking advantage of possible positive outcomes. “No regrets” options are courses of action that can benefit the world ecologically and economically. For example, implementing measures to adapt to climate change also improves resilience to normal climate variability. On a large scale, investments in renewable energy technologies will help reduce greenhouse gas emissions while providing other long-term ecological and financial advantages. Individual actions that reduce greenhouse gas emissions also can be economically and environmentally smart. Uncertainty of the future does not mean we cannot take action. We can act in ways that are good for our world, our health, and our wallets.

9 NASA (2005). What’s the Difference Between Weather and Climate? http://www.nasa.gov/mission_pages/noaa-n/climate/climate_weather. html

13 Oreskes N (2007). “The Scientific Consensus on Climate Change: How Do We Know We’re Not Wrong?” In DiMento, Joseph FC, and Doughman PM, eds., Climate Change: What It Means for Us, Our Children, and Our Grandchildren. Cambridge, MA: MIT Press.