Hemlock woolly adelgid is established in isolated locations in the western Lower Peninsula of Michigan. As of May 2017, hemlock woolly adelgid (also referred to as HWA) had been found in localized areas of Allegan, Muskegon, Oceana and Ottawa counties, and additional surveys are underway. To see current infestation maps, visit the HWA page on the Michigan Department of Agricultural and Rural Development website. 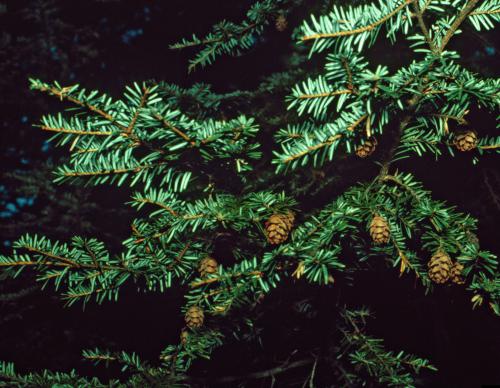 Be sure your tree is a hemlock: Identifying hemlock trees

Before looking for hemlock woolly adelgid, make sure your tree is a hemlock and not a fir, pine or spruce tree. Hemlocks can be distinguished from pine and spruce by their short, flat needles. Hemlock needles are only about a half-inch long, which is much shorter than most pine needles. You can roll pine and spruce needles between your fingers, but not the flat hemlock needles. The underside of hemlock needles have pale white stripes, which will distinguish them from pines and spruces. However, the undersides of Douglas fir and balsam fir needles may also have pale white stripes, so you will need to look at the shape of the needles to distinguish hemlocks.

The only other conifers with short, flat needles are firs and Douglas fir, which is technically not a fir. Eastern hemlock needles can be distinguished from fir needles by their shape: they are slightly wider at the base and taper to a rounded tip with a dull point, while fir and Douglas fir needles have parallel sides for nearly the entire length of the needle. 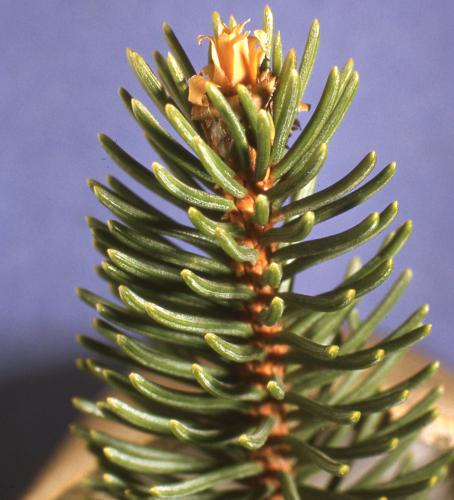 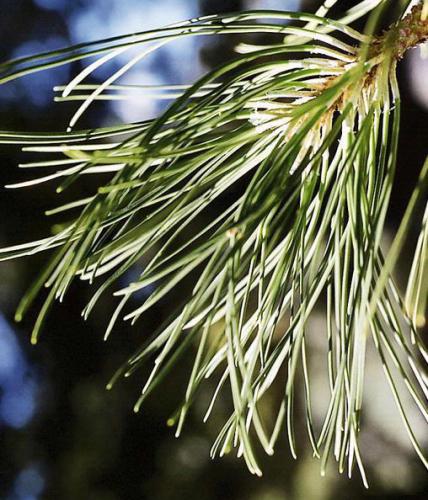 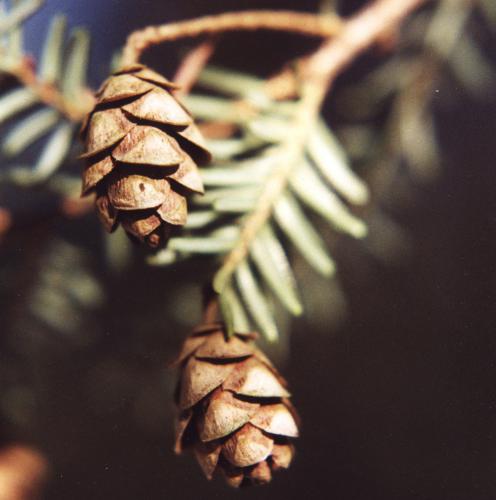 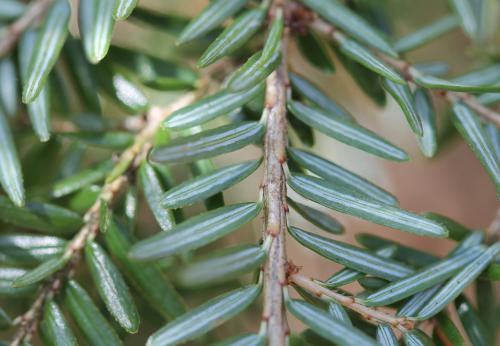 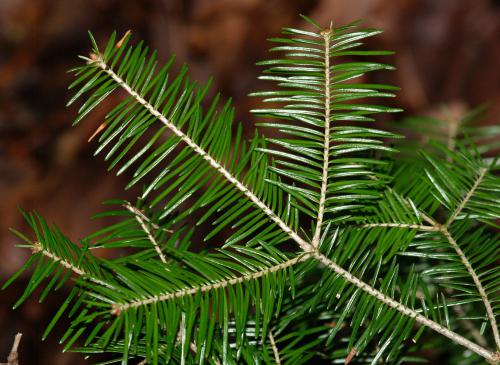 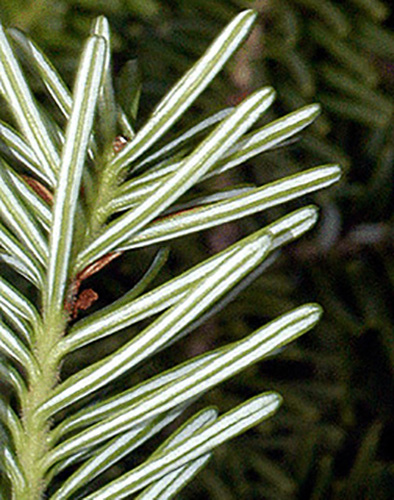 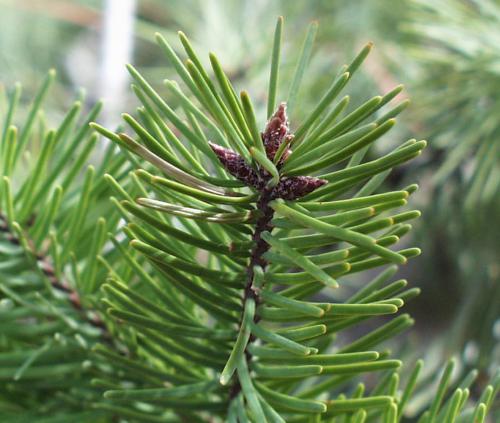 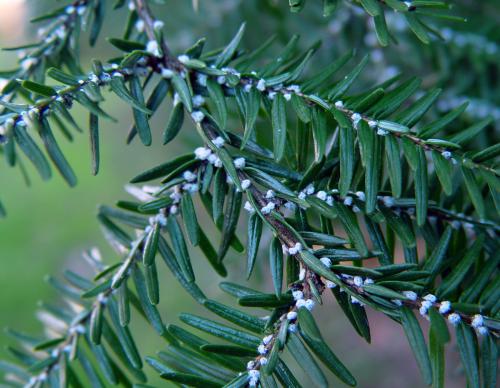 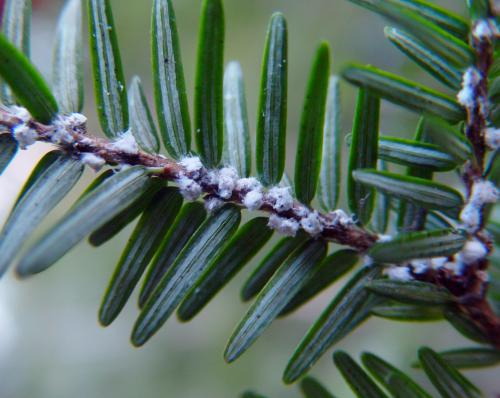 Hemlock woolly adelgid has only been found in a few locations in Michigan at this time. Many people who check their hemlock trees may notice small, white spots that look a bit like hemlock woolly adelgid. Other insects, including the elongate hemlock scale, oak skeletonizer cocoons, caterpillar cocoons or spider egg sacs may be present on hemlock needles or shoots. Compare the pictures of hemlock woolly adelgid above with the look-alike images below to help correct identification. 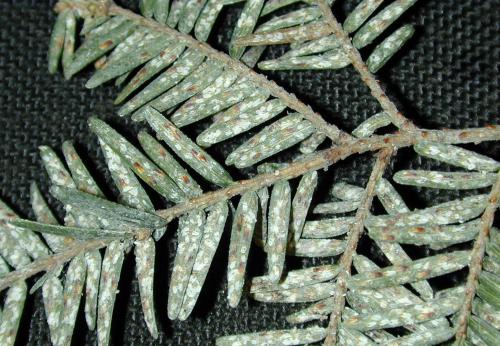 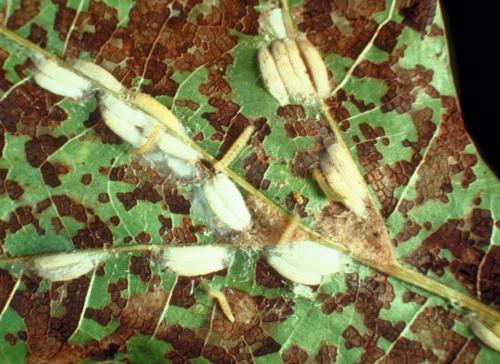 If it appears your hemlock tree is infested with hemlock woolly adelgid and you would like to confirm your identification, take photos, note the location of the tree and report it to the Michigan Department of Agriculture and Rural Development (MDARD) by emailing MDA-Info@michigan.gov. You can also call MDARD at 800-292-3939 to report a suspected hemlock woolly adelgid infestation. It will be especially helpful to notify MDARD if the infestation is outside of the current infestation areas indicated on their HWA website.

Please do not clip infested branch samples and transport them or mail them to another location for identification. You could accidentally spread hemlock woolly adelgid to areas that are not yet infested.

If you have confirmed that one or more of your hemlock trees is infested with hemlock woolly adelgid, consider treating them with a systemic insecticide. If the adelgid is not controlled, infested trees will decline and eventually die, usually within four to 10 years.

A simple treatment method for homeowners entails applying a systemic insecticide to the soil around the tree trunk base. The insecticide is absorbed by tree roots then transported within the tree to the shoots and needles. The active ingredient (i.e., the toxic compound) in products available to homeowners will be either imidacloprid or dinotefuran (Table 1). Imidacloprid is absorbed by roots and moves through trees relatively slowly, sometimes taking a year to reach the shoots in the top of a large tree. The advantage of using imidacloprid, however, is that one application will protect the tree for at least four years.

In contrast, dinotefuran moves into roots and through the tree quicker than imidacloprid, but does not last as long. Dinotefuran should protect trees for one to two years after an application.

All of the systemic insecticide products listed in Table 1 should be applied as a soil drench or a granular application to the soil at the base of the trunk. Follow the label instructions to determine how much product to use for each tree, as the amount of insecticide is based on the size of the tree trunk (circumference).

For granular products, remove debris from the soil then spread the correct amount of granules around the base of the tree, as close to the trunk as possible.  Protect people, pets and wildlife from the granules by using a watering can or sprinkler to help the insecticide soak into the soil, then cover the treated area with a thin layer of mulch.

The products listed in Table 1 can be applied any time between early April and late October.

When making pesticide applications, carefully read the label and follow all directions. Do not exceed the label rate as there is a maximum amount of imidacloprid that can be applied per acre in a given year, usually 0.4 pound of active ingredient. The per-acre limit will only be of concern if you plan to treat very large hemlock trees or many small trees.  For example, the maximum amount of imidacloprid per acre per year will be reached when you treat 16 trees with a 24-inch trunk circumference, or 8 trees with a 48-inch circumference, or 4 trees with a 96-inch circumference.

You may prefer to hire a landscaper or arborist who is has pesticide applicator certification to treat your trees. Tree care professionals have access to a wider range of products and application methods for hemlock woolly adelgid. (See “Options for Protecting Hemlock Trees from Hemlock Woolly Adelgid.”)

The hemlock woolly adelgid wool (egg sacs) will not disappear immediately after treatment, but will eventually weather away. Examine the new needles one or two years after applying the insecticide to determine if the treatment was effective.

Hemlock trees will need to be protected from hemlock woolly adelgid in the future by treating them once every one to two years with products containing dinotefuran, or once every four to five years with products containing imidacloprid. Toxicity to pollinators following the uptake of imidacloprid or dinotefuran is not critical because bees are not attracted to hemlock pollen and few flowering plants can grow in the shade under a hemlock.

Note: Reference to commercial products or trade names does not imply endorsement or bias against those not mentioned.

The authors wish to thank John M. Bedford, MDARD, for review of this article.