It seemed like the 4th International Chestnut Symposium (2008) held in China was hardly over when it was time for the next chestnut meeting. –But who is complaining? This meeting was double-billed as the 1st European Congress on Chestnut AND the 5th Italian National Convention. It was held in Cuneo, Italy, about an hour south of Turin (Torino) near an area called the Maritime Alps. Actually, the nearest large city was Monte Carlo in the small country of Monaco on the Mediterranean Sea. The meeting was held the 13th to the 16th of October and overlapped with the Italian National Chestnut Festival held October 15th to the 18th.  In less than a week, one became immersed in a world of chestnut—horticulture, history, culture and culinary aspects of our favorite nut.

This was one of the best meetings on chestnut I have had the pleasure to attend. When I asked an Italian his impression of the meeting, he thoughtfully hesitated and said it was better than he thought it would be. That was glowing praise when considering the fact that it was held in the middle of a worldwide recession and only a year after the China meeting. The field trips were enlightening, the presentations timely and the festival atmosphere made it, at times, magical.

Michigan sent a delegation of 11 including two chestnut growers, two graduate students, a research technician, two professors and their spouses. Australia sent twice a many, mostly growers. The Michigan delegation made six presentations on chestnut quality, efficiency of peeling, chestnut genetics, and introducing Europeans to the Michigan chestnut industry. Australia made one presentation on chestnut post-harvest rot and advertised their industry in a beautiful set of posters. By the way, the Australians announced they were purchasing a chestnut peeling line from the same Italian company (Boema) as Michigan did in 2001. Not all of the Australians knew much about this and when or where it was located and used (Figure 1). 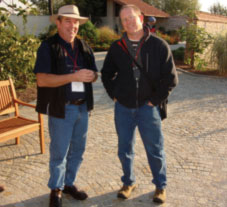 Figure 1. John Kane of Canberra, Australia, speaks with Michigan's chestnut grower Pete Ivory at a break during one of the farm tours.

The Italian meeting was divided into oral and poster presentations with discussions, a chestnut commercial product exposition, a chestnut machinery show and two different field trips (Figure 2), not to mention a concert and opera. There were so many oral presentations that the meeting had congruent oral paper sessions. Unfortunately one had to choose, for example, between paper sessions such as Pests and Diseases or Economics and Marketing that met at the same time on the same day. One even had to make a decision between two field trips; one to chestnut processing plants and the other to farms. 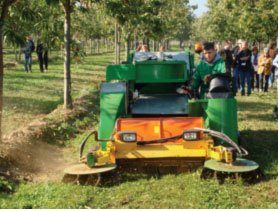 Because it was the National Chestnut Festival, all of the city’s storefront display windows had a chestnut theme, regardless of the products sold by the store (Figures 3-5). Because every window’s chestnut display was different, it made a very entertaining walk from the hotel to the conference center. Also, one evening a classroom at the chestnut research laboratory was filled with all of the food and drink products made from chestnut. It was really incredible as the entire room was filled with puree, creams, flour, pastry, candy, cookies and crackers, pasta, beer, and the list goes on and on (Figures 6-8). There were three take-home messages I would like to share. 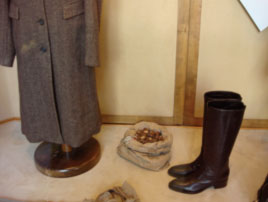 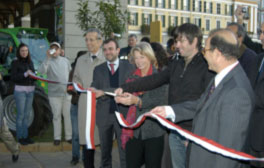 Figures 3-5. Store-front windows displayed scenes from chestnut culture regardless of what the store sold. The small town of Cuneo hosts the Italian Chestnut Festival each year and store owners enter a contest to see who can display the most outstanding chestnut scenario. 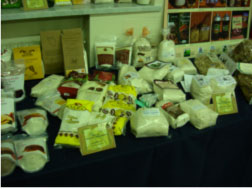 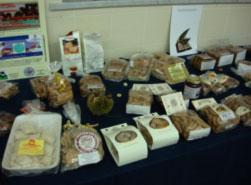 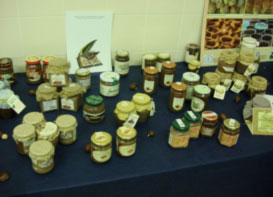 Figures 6-8. A classroom was overflowing with various food and drink products produced from chestnut.

The second interesting discovery that I would like to share occurred on our first farm visit on the fieldtrip. Some background information first. Most of the European nations that produce commercial chestnuts, for example Spain and France, grow Japanese/European hybrids. They may use the wild European chestnut as rootstock, but the growers usually graft Japanese/European hybrids to the rootstock. Italians, on-the-other-hand, pride themselves on always growing pure (or what they assume is pure) European chestnut. They graft selections (called ‘Marrone’) of pure European chestnut onto wild chestnuts, usually growing naturally in the environment. So the first farm we were taken to (and even the second farm) was planting European/Japanese hybrids, in many cases the same cultivars we grow in North America such as ‘Busche di Betisac’, ‘Marasol’, ‘Marigoule’ and others. These orchards, so different than most of the traditional Italian farms looked like new North American and Australian chestnut farms (Figures 9 and 10 ). These growers are new to chestnut production and the farms are new. They are planting cultivars that they believe will produce large, marrone-like chestnuts with high yields and go into production a short time after orchard establishment. They have to deal with chestnut blight (Figure 11), Phytophthora root rot and now Asian gall wasp (Figure 12). Using several cultivars provides them diversity. For example, they now know that ‘Busche di Betisac’ is more tolerant to Asian gall wasp than the natural European chestnut or other European/Japanese chestnuts. 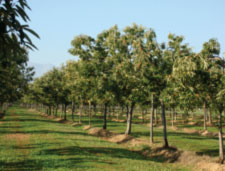 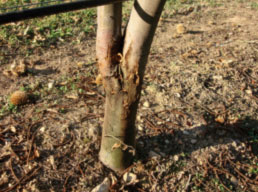 Figure 11. Chestnut blight is still a threat to the blight-susceptible European/Japanese hybrid trees. 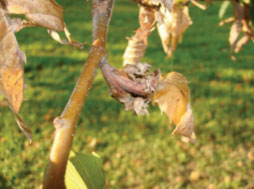 First, the most important piece of information I learned was something I did not know about the devastating invasive insect infestation known as Asian gall wasp. Background: Asian gall wasp, an insect pest from China was introduced to North America in the 1970’s. It has spread from the southeastern states north to Ohio bordering the south shore of Lake Erie. This insect was transported to northern Italy in 2001 and began to spread rapidly by 2004. The insect lays its eggs in the buds of the chestnut, which causes the buds to abort or produce hypertrophies (odd shaped growths) inhibiting flowering. I had heard in China that ‘Busche di Betisac’ was tolerant to the insect and that seemed to be the case as the ‘Busche di Betisac’ looked uninfested in orchards where we saw other cultivars infested with gall wasp. What I did not know and what researchers told us at the meeting is that the eggs and young larvae of Asian gall wasp could be present in buds without any symptoms. In other words, there is no way of knowing if a young tree or scion wood is carrying the insect internal to the buds. One would risk moving the insect if any chestnut buds are taken from an infested location, even if the buds look normal and uninfected.

Third, while on the farm fieldtrip I had the opportunity to meet with the leader of a regional chestnut cooperative called the Associazione Produttori Castagne Val Pellice. I was amazed that even though chestnut culture is an ancient endeavor in Italy, this cooperative was formed only 8 years ago in 2001. It has 50 members paralleling our own cooperative, Chestnut Growers, Inc., in terms of age and number of members. With ancient trees in an ancient culture and a few more members, you might think their total production would be off the charts. In fact, their production records, which they shared, indicated they are still young and growing. In the first and second year after their founding, they produced about 14,000 pounds of chestnuts. After that, production increased for two years doubling in their third and tripling in their fourth years, respectively. In their fifth year after starting, things stabilized at 39,000 pounds. In 2006, production went down somewhat, and in 2007 production peaked at almost 25 tons or 50,000 pounds. Then in 2008, production appeared to crash dropping to less than their founding year.

When I asked what they thought accounted for this crash in production, thinking that it may be due to chestnut blight infection or Asian gall wasp infestation, they indicated that the weather was responsible for the low yields. Apparently it had rained a lot during pollination in 2008 and they had poor pollination in the orchards. This was the first time I have ever heard Europeans even think about the role pollination plays in chestnut production, let alone blame production or lack of production on poor pollination. Past questions about pollination-induced answers such, there is so much pollen, we don’t think about it.

So where does the cooperative market its chestnuts? 15 percent are sold locally on the farm, in local farm markets, or processed in local bakeries. The other 85 percent are sent to distant markets or to large processing plants.

The meeting was informative and the proceedings will be published in 2010. I suggest growers obtain a copy and read the presentations on Harvest, Post Harvest Quality, Pests and Diseases, and Economics and Marketing. Also, a new book was being sold at the meeting called Following Chestnut Footprints. It has chapters on cultivation and culture, folklore and history, and traditions and uses. It is a publication of the International Society for Horticultural Science, Scripta Horticolturae N. 9, edited by Daminao Avanzto and a host of authors. It is in English and has lots of valuable photos and information. The ISSN number is 1813-9205 and the ISBN number is 978 90 6605 632 9.