The Japanese beetle was introduced into New Jersey around 1911. Since then, readily available food for adults, abundant turf for larvae and low levels of natural enemies have contributed to the buildup and spread of this insect across eastern North America. In Michigan, the presence of adult beetles has been reported from every county in the lower two-thirds of the Lower Peninsula. This factsheet provides general information on Japanese beetle and management approaches for use in blueberries and other perennial fruit crops.

Adults are about 13 mm long (Figure 1). The head and thorax are metallic green, and the rest of the upper surface is copper-colored. Five tufts of white hairs on both sides of the lower surface and a sixth pair on the tip of the abdomen are distinguishing features of this beetle. Males and females frequently congregate on plants exposed to sunlight, where they feed and mate. 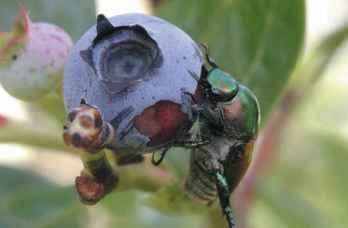 Adult beetles feed on the foliage and fruits of about 300 plant species, including fruits, field and garden crops, ornamentals and many wild plants. Among the small fruit crops, adult Japanese beetles prefer grape, raspberry and blackberry over many other plants, including blueberry. Adult Japanese beetles skeletonize the foliage, consuming the soft mesophyll tissues between the veins, leaving a lacelike skeleton. Beetles cluster at the tops of plants, so the upper canopy is usually defoliated more severely. In many fruit crops, foliar damage is unlikely to affect yield. Once fruit becomes ripe, beetles may feed and aggregate on ripening fruit.

Eggs are 1 to 2 mm in diameter, spherical and white (Figure 2). Females lay batches of eggs 5 to 10 cm below the soil surface, generally in areas with grass and moist soil. 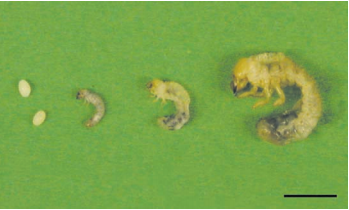 Larvae (also known as grubs) are 2 to 3 mm long when newly hatched; fully grown larvae are about 30 mm long (Figure 2). Larvae are C-shaped and white with a brown head capsule and three pairs of legs (Figure 3). 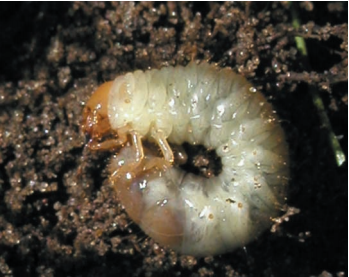 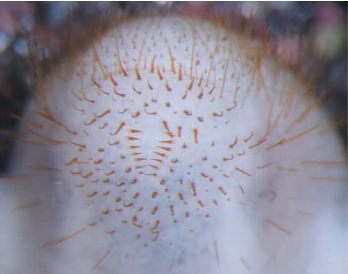 Figure 4. Pattern of hairs on the anus of a Japanese beelte grub. Note the V-shaped pattern of two rows of 7 hairs in the center.

There is usually one generation per year, although a full life cycle may take two years in the coldest regions of Japanese beetle distribution. In Michigan, adult emergence starts in the first week of July, and adult beetles are present until mid-September (Figure 5). Females mate immediately after emerging from the soil, on the ground cover and on other plants, but they usually move to other sites to feed before laying the first batch of eggs.

Egg laying occurs mainly in July and August in the vicinity of the feeding sites. A female lays 40 to 60 eggs in her life, preferring moist soil with grassy cover. The female beetle digs about 10 cm into the soil several times over a period of about two weeks, each time laying eggs in small batches. Eggs hatch one to two weeks later, and the small larvae feed on the nearby roots.

Japanese beetle larvae overwinter as third instars 10 to 15 cm deep, moving down in the soil to avoid freezing. In the spring, as the soil warms up, the larvae move closer to the surface and begin feeding on roots. Larvae pupate in June, and adults emerge about two weeks later to start the life cycle again.

Monitoring. The presence of adult beetles is often the first sign that this pest has become established in a farm. Using monitoring traps (Figure 6) during late June and early July can provide early warning of beetle emergence, but removing traps after the first captures is recommended because their continued presence near fields can attract beetles to the vicinity of the trap without removing them from the population. Therefore, traps should not be used for control of Japanese beetles. During harvest season, regular monitoring of bushes in infested fields can be used to determine whether control of adult beetles is required. 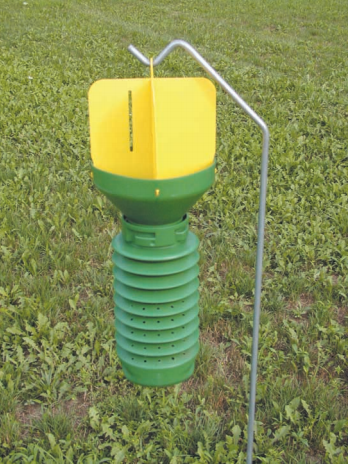 Sampling the soil for Japanese beetle larvae in and around infested fields can help determine where to target soil-applied controls. Larvae are relatively easy to sample because of their size and light color (Figure 3). Take samples in grassy areas around and within fields after the soil warms in the spring, when fully grown larvae are feeding near the surface of the soil. To sample for larvae, cut a defined area of sod (1 square foot, for example) and shake through the soil and roots for grubs. Keep a record of the position and number of grubs per square foot from a number of sites to compare samples over time and between fields.

Cultural control. One of the most effective control tactics is to make crop fields and nearby areas less suitable for Japanese beetle by integrating many cultural approaches into regular horticultural practices. Remove all attractive host plants (e.g., wild grape, Virginia creeper, brambles and sassafras) from the blueberry field and nearby areas to attract fewer beetles to the fields. Prevent re-establishment of these weeds by hoeing, using herbicide or mulching.

Adult Japanese beetles prefer to lay eggs in grassy areas, so they are much less abundant in cleancultivated fields than in fields with grass. Removing grass during the egg-laying period, July through September, is particularly important, but some growers have adopted clean cultivation to reduce populations of Japanese beetle as well as to get the added benefits of frost protection and weed control. In wet fields, clean cultivation can cause difficulties for spraying and harvesting machinery. Another approach is to cultivate fields after harvest, disturbing the grubs and reducing their food for development.

Cover crops that are not attractive to beetles are a potential alternative to clean cultivation, providing some structure for machinery to pass over and reducing risk of erosion and pesticide runoff. Acid-tolerant cover crop species are currently under investigation.

Biological control. Natural enemies are often powerful agents of control for insect pests. Japanese beetle grubs may become infected with nematodes, viruses or bacteria. Symptoms of these infections include mushy grubs and grubs turning yellow or red. Only about 1 percent of larvae in Michigan are infected with natural enemies. Milky spore disease has not been evaluated recently in Michigan but is generally considered less effective in areas with cold winters.

Chemical control. Control of adults by applying insecticides to bushes may be necessary to prevent contamination of harvested fruit or to protect fruit from damage. The best control requires good coverage of the whole plant canopy. This may be difficult during the fruit ripening period when applications are often applied by air or from the field perimeter. Beetles are strong flyers and may fly into the field immediately before harvest. Biological insecticides with short preharvest intervals may then be required to get beetles off the bushes before harvest.

Chemical control of grubs can be used to decrease the population of Japanese beetles in and around infested fields. This can be particularly important in fields with grass between bushes or around the field and where clean cultivation (see above) is not feasible, such as in wet fields. Preventive insecticides must be applied before egg laying so the residue is present soon after young grubs hatch. Thus, applications must be made before July for maximum effect. These compounds should be irrigated into the turf immediately after application so that active residues are present around roots.