Hops are the flowers or cones of female hop plants (Humulus lupulus; see fig. 1). Historically, hops have been used as medicine, paper fiber, a salad ingredient, a sleep aid in pillows, and of course, as a preservative and flavoring agent in beer. The first written description of hops being used in beer comes from 12th century Germany (German Beer Institute, 2004–2006). In addition to water, malted barley, and yeast, hops are an essential ingredient in beer production. Hops contain alpha and beta acids and essential oils that contribute to beer’s bitterness and aroma. Brewers can alter the flavor, aroma, and bitterness of beer by adding different hop varieties during different stages of the brewing process. 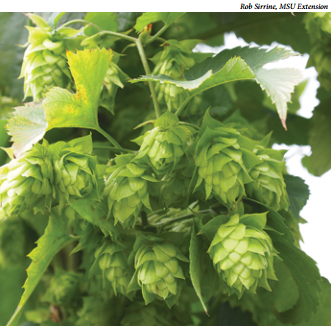 The hop plant is most likely native to China, but hops are now grown in many temperate areas of the northern and southern hemispheres. Commercial hop production in the United States began on the East Coast in the 1700s, but eventually shifted to the Pacific Northwest, where more than 80% of U.S. hops are currently grown. With the growing appeal of specialty beers and locally grown foods, interest in hops has increased among Michigan farmers, gardeners, and home brewers.

Hop plants are perennials that produce bines (twining stems) from the crown or rhizomes (permanent root stock) each spring. Hop plants are dioecious – that is, male and female flowers grow on separate plants. Only the cones produced by female plants are used in the brewing process.

Aided by trichomes (stout hairs) hops grow clockwise around strings that are attached to trellis systems in commercial hopyards. Under the right conditions, bines can grow 4 to 10 inches a day. Around the summer solstice (late June), hop plants develop lateral branches and produce clusters of 0.5-inch to 4-inch papery green flowers or cones.

Hops will grow in a variety of soils, but do best in welldrained, deep, sandy loam soils with a pH around 6.5. Growers should avoid siting hop yards in heavy, poorly drained soil.

To flower and produce high cone yields, hops need long days and short nights during the growing season. Hops also require winter temperatures below 40 °F for one to two months.

For these reasons, most commercial hop production takes place between 40 degrees and 50 degrees latitude.

Hops need supplemental water and nutrients to ensure ample plant growth and the full development of the chemical compounds in the cones that are used in the brewing process.

Different types of beer are often made with different types of hops. For example, ‘Cascade’, ‘Centennial’, and ‘Chinook’ are all often used in brewing India Pale Ales or IPAs. Hop varieties also differ in their disease susceptibility and yields. These aspects should be taken into consideration when choosing which varieties to plant. “Comparing and Selecting Hops” (Brew Your Own, n.d.) provides hop variety descriptions, comparisons, and substitutions.

Hops can be purchased and planted as rhizomes (root cuttings) or propagated plants. Brown and Sirrine (2012) recommend that growers buy disease-free propagated plants instead of rhizomes – unless the rhizomes come from a reputable source.

Weeds and other vegetation should be removed from hop yards throughout the growing season (see fig. 2). New hops should be planted in the spring (late April to early May in most of Michigan), though some growers have had success with early fall planting as well. Maintain a 3- to 4-foot diameter weed-free zone around each hop plant for best results. 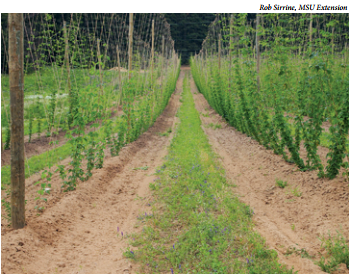 Hops are vigorous plants and in the right conditions can spread rapidly. Planting different hop varieties at least 10 feet apart will help keep them from mixing through underground root suckering.

Because of their vigorous growth potential, hops need support from a trellis or some other structure. In most commercial hop yards, growers train hops to grow up coir strings that are attached to overhead cables.

The best way for growers to identify the nutrients they’ll need to provide for their hop plants is to test the soil in the hop yard annually. Compost can be applied at any time, but fertilizer should be split into at least three applications between April and the beginning of July. If applying compost, fertilizer rates can be reduced.

While hop nutrient needs vary depending on soil quality, cultivars, and growing region, in general established hop plants need 120 to 150 pounds of actual N (nitrogen) per acre (about 0.33 pounds of actual N per 100 square feet). Hops typically have low P (phosphorus) requirements, while the optimal range for K (potassium) is around 100 parts per million. First-year application rates for all nutrients are generally one half to two thirds of those for fully established plants. Hops also require micronutrients like boron, zinc, and manganese.

To maximize yield, hops require supplemental irrigation. Michigan State University (MSU) Extension recommends at least 6 gallons per plant per day during June and July when the plants are growing rapidly.

Growers often prune second- or third-year plants back to the crown when the bines are about 2 feet high or have been growing for about 2 weeks. Such pruning helps improve the plants’ vigor, removes the previous year’s growth, and reduces disease pressure. Once the secondary growth reaches 2 feet, growers choose two or three bines from each plant to train in a clockwise direction around a support string or structure, and remove any other shoots.

Hops are susceptible to diseases such as downy and powdery mildew and to insect pests such as mites, aphids, and leafhoppers (see fig. 3). Growers must monitor plants for signs of disease and pest problems at least once a week throughout the growing season to determine whether control measures are needed. The Field Guide for Integrated Pest Management in Hops (Gent, Barbour, Drewes, James, Parker, & Walsh, 2009) is an excellent resource for identifying pests and diseases that affect hops. It is available online as a free pdf. Growing Hops in Michigan and the Great Lakes Region (MSU Extension, 2014) provides an overview of the organic and conventional pest control methods that are recommended for hops growers. 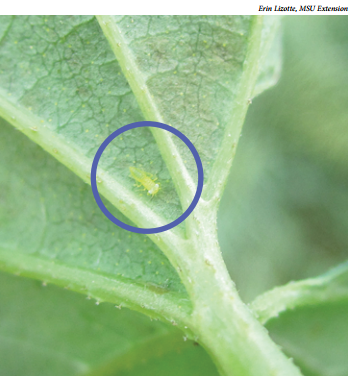 The hops harvest in Michigan generally happens sometime between late August and the end of September. The timing depends on several factors, including the hop variety being harvested, the weather, the cone moisture content, and any pest or disease issues in the hop yard. Proper timing is essential, because hops are in prime harvest condition for only 7 to 10 days. Hops are generally ready for harvest when:

Some growers send cone samples to a testing laboratory for a more precise analysis of their crops’ harvest readiness.

Hops are harvested by cutting down the bines, then removing the cones from the bines. The harvested cones can be used immediately to brew wet-hopped seasonal ales. They can also be dried, vacuum packed and stored in a freezer for later use.

The harvested bines can be composted or burned, but it’s best to keep composted bines away from the soil near the hop plants to reduce the chance of spreading disease.

The best drying method depends on the quantity of hops to be dried, the facilities available, and the budget. The choices include placing the hop cones in a commercial dryer, in a sealed room with a dehumidifier, or on a screen in the sun or in a warm attic. Whatever the method, drying hops at temperatures below 140 °F will generally result in a higher quality end product. Hops should be dried to 8% to 10% moisture to keep them from molding or otherwise spoiling. The simple online Hop Harvest Moisture Calculator (University of Vermont Extension, 2014) is useful for determining moisture levels.

Growers or brewers may want to have a laboratory test the quality parameters such as the alpha and beta acid levels in the hops they have grown or are considering buying. To find a Michigan lab capable of conducting such testing, search online for “hops testing service Michigan.”

In general, and depending on the variety, a mature, well-tended hop bine should produce at least 1 pound of dried hops a year

Brew Your Own. (n.d.) Comparing and selecting hops [web page]. Retrieved from byo.com/resources/hops