“Winterkill” is a general term that is used to define turf loss during the winter. Winterkill can be caused by a combination of factors including crown hydration, desiccation, low temperatures, ice sheets and snow mold. Because of the unpredictability of environmental factors and differences in other factors such as surface drainage, the occurrence of winterkill on golf courses is variable and can vary greatly between golf courses and even across the same course.

In general, annual bluegrass (Poa annua) greens and fairways are the most susceptible to crown hydration injury. During the warm days of late winter, annual bluegrass plants start to take up water (hydrate). Potential for injury exists when a day or two of warm daytime temperatures in late winter is followed by a rapid freeze. The most common time for winterkill associated with crown hydration and refreezing to occur is during the late winter and early spring when there is snowmelt or rainfall and then refreezing of the water that has not drained away. Crown hydration is a problem during these events because ice crystal can form in the crown of the plant, rupture the plant cells and ultimately cause the plant to die. 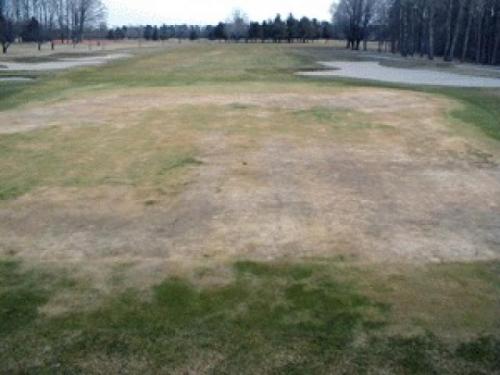 It can be very unsettling when areas don't green up in the spring. 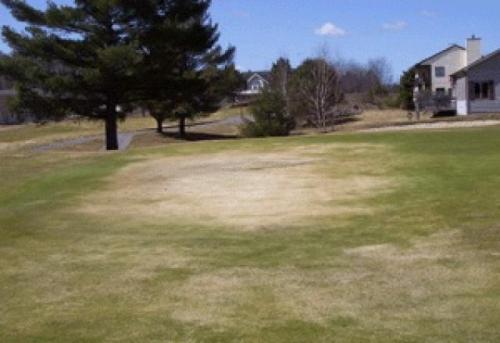 Some areas are prone to collecting water.

Ice sheets are often blamed for killing turf when, in fact, it is crown hydration and subsequent refreezing that has resulted in the kill. The reason for the confusion is that, as snow melts and refreezes, creating ice sheets, the ice sheets are often in poorly drained areas where crown hydration can occur because of the standing water. As the ice sheet melts away, the area damaged closely mirrors where the ice occurred, and therefore, the conclusion is that ice sheets caused the kill. Beard conducted research on ice sheets on three turfgrass species: Kentucky bluegrass, creeping bentgrass and annual bluegrass. Kentucky bluegrass and creeping bentgrass survived 150 days of ice cover without significant injury; annual bluegrass was killed somewhere between 75 and 90 days of ice cover (Beard, 1998). The author concluded that cause of death for the annual bluegrass was most likely from toxic gas accumulation under the ice sheet. 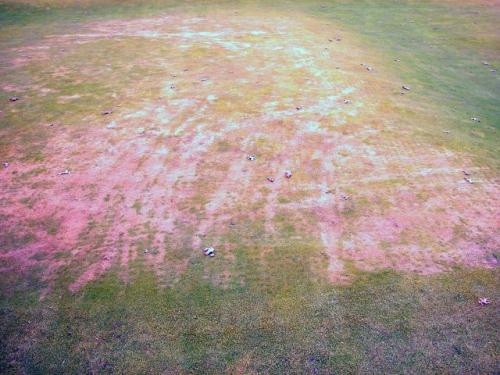 Winterkill on a putting green, exacerbated by cross country skiing.

To assess if damage has occurred, samples can be taken from turf areas, moved inside and placed in a warm, sunny area to see if the turf greens up. If there is no green-up within a couple of weeks, the turf was killed.

Reestablishing turfgrass in damaged areas can be very challenging in the spring because of the cool, cloudy conditions that often persist. Depending on the extent of damage, either seeding or sodding may be necessary to facilitate recovery. In areas where the turf was killed in a manner that left well-defined margins between dead and living turf, it may be feasible to strip dead turf and sod the area. In areas where the kill was more scattered, it may be easier to seed the area. Seeding can be difficult, especially on damaged areas of greens. Interseeding creeping bentgrass into dead areas on the greens has given mixed results. The best results with interseeding have occurred when the lowmow, high-density creeping bentgrasses, such as the A and G series bentgrasses, have been used. Tools such as the Job-Saver aerator attachment, which produces numerous small, shallow holes, also increase the success of an inter-seeding program. The interseeding process should continue weekly until the damaged area has completely recovered. On greens that are predominantly annual bluegrass, often it is better to scratch the surface of the dead areas to allow the annual bluegrass to germinate and fill in the voids. Keys to success for renovating winterkilled areas are to divert traffic from newly seeded areas, apply light fertilizer applications to stimulate growth, and irrigate to ensure that the seedbed or sod is moist throughout the establishment period. 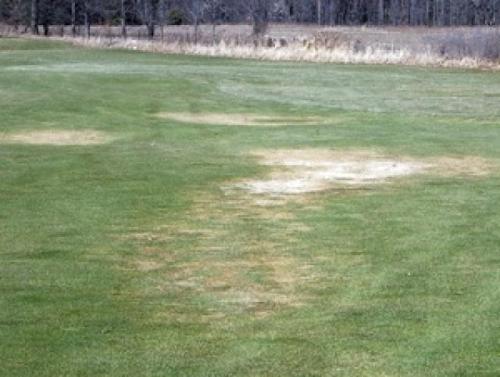