Beans (Phaseolus vulgaris) originated in Latin America and are widely grown at mid- to higher elevations today from Chile to Canada. Brazil is the world’s leading bean producer followed by Mexico and the U.S.  Yields range from under 500 kg/ha in subsistence agricultural systems to over 4 tons/ha in highly managed and irrigated agricultural systems of the western U.S. Despite their importance as a food security crop in many Latin American countries, bean production has been relegated overtime to lower productive infertile soils in drought prone regions or to the shorter growing seasons at higher elevations and northern latitudes in North America.  As a result bean yields have not shown the same advances as in other crops, largely due to the lower productivity conditions in which they are grown. In order for beans to survive in these harsh growing conditions, bean breeders have had to focus on defensive breeding strategies rather than the offensive breeding strategies deployed to improve yield in major commodities such as corn, wheat and soybean.

Beans were moved to the African continent by Portuguese traders in the 1600s and the crop was established in the more mountainous regions of Eastern and Southern Africa. The major bean types introduced to Africa were larger-seeded Andean bush and climbing types and these are grown by small-scale producers from Ethiopia to South Africa today. Producers in both continents confront the same production problems. The lack of effective seed distribution systems in many countries limit the dissemination of new varieties bred by national governmental research institutes (NARs), local universities and international centers (IARCs).  Attempts to improve this situation using participatory plant breeding through local agricultural research communities (CIALs) and NGOs are being undertaken in many countries.  Active partnerships are essential between research institutions to ensure the successful dissemination of new varieties in many countries. 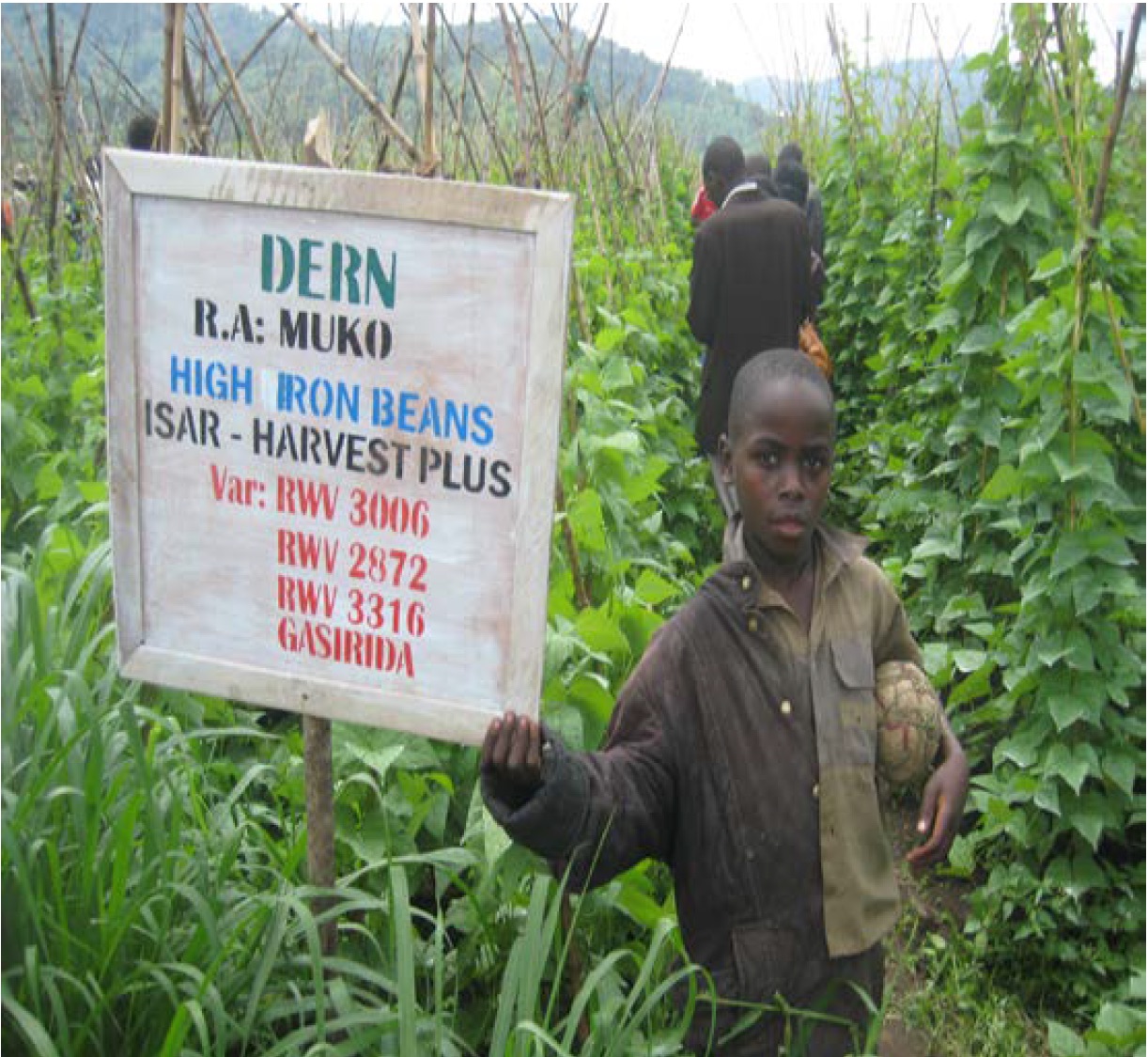 Figure 1. Bean seed dissemination in Rwanda. DERN is a local NGO that is working with the National Program RAB in the northern Rwandan community of Muko to disseminate through the HarvestPlus Program the high iron climbing bean varieties that were developed at CIAT (shown in photo). MSU is partnered with RAB to further improve these materials for disease resistance and drought tolerance. Intercropping experiments are also being conducted at the same site using participatory research methods to explore alternative cropping systems with corn as a means to support the climbing beans since staking is costly for the low income producers.

Current international project at MSU funded through the Legume Innovation Lab is to improve the Genetic Yield Potential of Andean Beans with Increased Resistances to Drought and Major Foliar Diseases and Enhanced Biological Nitrogen Fixation (BNF) through conventional, molecular and farmer participatory breeding approaches in Uganda and Zambia. Prior projects were focused in Ecuador and Rwanda.

Beans are the second most important food legume crop after groundnuts in Zambia and are a major source of income and cheap protein for many Zambians. Most of the bean crop (62%) is produced on 60,000 ha in the higher altitudes, cooler and high rainfall zones of the northern part of Zambia. Andean beans are predominant and land races are the most widely grown although a few improved cultivars are also grown as sole crops or in association mainly with maize. Bean production is constrained by several abiotic and biotic stresses that include diseases, pests, low soil fertility and drought. All the popular local landraces in Zambia are highly susceptible to pests and diseases that severely limit their productivity. This is reflected in the very low national yields ranging from 300 to 500 kg/ha that result in annual deficit of 5,000MT.  To avert future food shortages and feed the growing population of 13M, there is critical need for increasing the productivity of most food crops including beans. Zambia ranks 164 out of 184 countries in the Human Poverty Index.

Beans are an important crop in Uganda and are grown on over 660,000 ha of land and consumed throughout the country. Beans are a major source of food and income for the rural smallholder farmers especially the women and children. As a non-traditional agricultural export crop, beans have gained a major dominance in terms of tonnage and monetary value among Uganda’s exports. That beans are produced in every district illustrates the dependence on beans as a major food security crop and their importance in farmers’ household incomes. The crop is ranked fourth in terms of export volume and eighth in terms of export value. The crop is also the most important source of protein for the Ugandan population providing 45% of the total human dietary protein and plays a significant role in ensuring food security. Beans provide a cheap source of protein to most vulnerable groups such as children below five years, pregnant mothers and AIDS patients. The majority of bean production in Uganda is dependent mainly on the use of inferior landrace varieties which are generally low yielding due to susceptibility to the major biotic (ALS, ANT, root rots, BCMV) and abiotic (drought, low soil fertility) stresses. These stresses gravely undermine the potential of the bean as a food security crop, a source of income, and as a main source of dietary protein for the majority of Ugandans.

Drought affects 60% of global bean production and the severity of yield reduction depends on the timing, extent, and duration of the drought stress. The presence of other stresses such as high temperature, root diseases, shallow infertile soils and climate change all contribute to intensify the problem. Improvements in current understanding of the physiology of drought and evapo-transpiration and the genetics of drought tolerance in common bean and the development of effective molecular and quantitative methods for the selection of drought tolerance are therefore needed. The development of improved varieties and germplasm with high yield potential, healthy root systems, improved BNF with resistance to multiple diseases, and sustained or improved water use efficiency under limited soil water conditionsare needed to increase profit margins, lower production costs. The project will use QTL analysis and SNP-based genome-wide association mapping to uncover regions associated with drought tolerance, disease resistance, enhanced BNF and faster cooking time. Results of this project would contribute to improved yield, farm profitability and human resources in the host countries and indirect benefit to participating U.S. Institutions and bean producers.  A complete listing of objectives and progress can be found on Legume Innovation Lab web site http://www.canr.msu.edu/legumelab/.