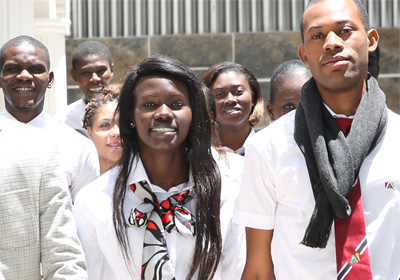 With 80 percent of its population engaged in agricultural activities, the sector is the cornerstone of Mali’s economy and holds great potential for driving economic growth. At the same time, nearly 30 percent of the population is malnourished. Low productivity, post-harvest crop losses, under-developed markets, and vulnerability to climate change are some of the major challenges which need to be addressed for Mali to become food secure and benefit from more broad-based economic growth.

While only 7 percent of 43.7 million arable hectares of land is currently cultivated and 14 percent of 2.2 million potential irrigable hectares are currently irrigated, the potential for agriculture growth and expansion in Mali is high. U.S. investments promote food security and more inclusive economic growth by: increasing agricultural productivity; promoting the adoption of yield-increasing technologies and the extension of soil and water conservation practices; strengthening input market development; improving the quality and value added of key food commodities; supporting the commercialization of surpluses; and mitigating adverse impacts of climate change.

The BHEARD program in Mali works with several priority institutions that work with USAID in the areas of Feed the Future priorities.  Some of them are:

The Institut d’Economie Rurale du Mali (IER) is the leading research institution in Mali for the implementation of the national agricultural research policy. The IER represents over 70% of the potential in agricultural research. Since 1990, the IER has undertaken a restructuring process that has allowed it to improve its scientific and technical performance while bringing end users of research results. The decentralization of the IER has covered all agro-ecological zones of Mali in research structures.  Learn more at the IER web site:  www.ier.gouv.ml

The Rural Polytechnic Institute for Training and Applied Research (IPR/IFRA) IPR/IFRA is one of the oldest centers of professional agricultural training in West Africa and Mali’s oldest center of agricultural higher education.  Originally founded as an agricultural research station in 1897, it became an agricultural training center in 1902.  It has served as a regional training center for professional agriculturalists from across Francophone Africa since that time and has over 17,000 graduates from 17 different countries.  It offers 3-year (license) and 5-year (maîtrise) degrees in most areas of agricultural sciences (crop production, animal science, agricultural engineering, forestry, etc.), a 3-year degree in agricultural economics, and coordinates a regional doctoral program in agriculture and climate change.  IPR/IFRA is located on a 380 ha campus, including a teaching farm, in the village of Katibougou, 70 km from Bamako. The school also has an annex in Bamako, which focuses on teaching animal production.

With 2,600 students from over 20 countries in Africa, a campus in Dakar, Tambacounda (Senegal) and another in Bamako (Mali), IAM is at the forefront of the teaching of Management throughout francophone Africa. Founded in 1996, the school has an international vocation and is at the center of a network that includes the following:

The IAM is a founding member of the Association of African Business Schools (AABS) and was the first West African business school to be equipped with a research center (in 2004). IAM has integrated the case method in its curriculum since 2000 and opened its graduate school in March 2007. Finally, the IAM is actively involved in the development of the region and has close ties with the business world whether through student internships, hiring graduates or its training and coaching centers for businesses.

The IAM, through its dynamism, sense of innovation, its network of partners, academic references and expertise, is ideally positioned to lead the creation of a center of excellence in francophone Africa. This initiative fits also in continuation of the writing of case studies by professors from the IAM.