Corn grain is currently being used to create ethanol through fermentation and distillation. The kernal is ground, exposing the starch. 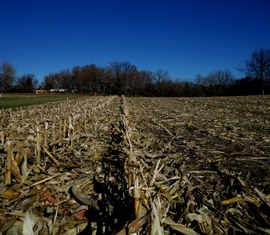 Yeast is then added to break down the starch into sugars. These sugars can be distilled into ethanol. This is considered first generation biofuel.

Second generation biofuels will primarily come from cellulose, found in cell walls of all plants. Corn stover is being considered as a primary source of cellulosic feedstock. Farmers planted 78.9 million acres of corn for grain in 2008. The abundant acreage, pre-existing knowledge and infrastructure already being directed toward corn production makes harvesting stover seem like a logical fit.

There are a few issues to address if we are going remove large amounts of corn stover for second generation ethanol production.

First, removing biomass also removes nutrients as well as carbon. We must figure out how to balance the cost of removal with the benefit of converting stover into ethanol. One important factor in balancing soil nutrients for crop production is soil organic matter. Any practices that can contribute organic matter to the soil generally improves tilth, quality and health. A determination of how much stover can be removed without degrading soil quality is needed. Researchers have examined numerous aspects of soil carbon and soil fertility. Most of them have looked at the addition of organic matter as a means to improve soil organic matter. What is tollerable on one farm might be completely different on another farm with different soil types, cropping systems and climate.

Second, we need to leave enough stover behind to protect the soil from wind and water erosion. Many studies have been conducted in the past three decades about soil conservation and protection. We have government programs in place to encourage farmers to implement soil saving practices like reduced tillage and grassed waterways.