Repeated use of the same class of pesticides to control a pest can cause undesirable changes in the gene pool of a pest leading to another form of artificial selection, pesticide resistance. When a pesticide is first used, a small proportion of the pest population may survive exposure to the material due to their distinct genetic makeup. These individuals pass along the genes for resistance to the next generation. Subsequent uses of the pesticide increase the proportion of less-susceptible individuals in the population (Figure 1). Through this process of selection, the population gradually develops resistance to the pesticide. Worldwide, more than 500 species of insects, mites, and spiders have developed some level of pesticide resistance. The twospotted spider mite is a pest of most fruit crops and is notorious for rapidly developing resistance to miticides. 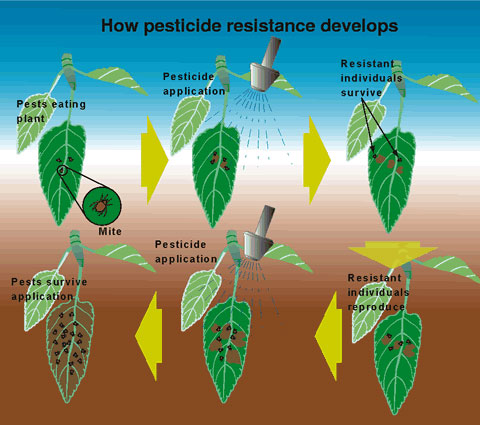 Some plant pathogens have also become resistant to pesticides. Among fruit producers in North America, apple growers perhaps have faced the most significant problems with pesticide resistance. Examples include streptomycin resistance in the fire blight bacterium and benomyl resistance in the apple scab pathogen. Although the precise genetic and ecological factors differ among pests that have become resistant, in all cases resistance is driven by one process -- selection.

Selection for resistance can occur if a small proportion of the insect population is able to survive treatment with insecticide. These rare resistant individuals can reproduce and pass on their resistance to the offspring. If an insecticide with the same mode of action is repeatedly used against this population, an even greater proportion will survive. Ultimately, the once-effective product no longer controls the resistant population.

Growers can help delay the development of resistance by applying pesticides only when they are needed, by rotating different chemical classes, and by using rates of pesticides within the labeled range. Integrating non-chemical approaches such as pheromone mating disruption and cultural controls can also help delay resistance.