Chestnut blight is probably the single most important pathogen affecting chestnut production in Michigan and the primary factor that dictates which chestnut species is planted in commercial orchards in North America. American chestnut is the most susceptible species to chestnut blight, a fungus that was introduced to North America in the early 1900s. This fungus reduced the great American chestnut forest of the Appalachian Mountains to a simple sucker sprout population that rarely produces any nuts. Generally, growers in western states (a chestnut blight-free environment) can plant chestnut blight–susceptible European chestnut (C. sativa) and their hybrids (C. sativa x C. crenata); and, eastern growers plant the naturally chestnut blight-resistant Chinese species (C. mollissima) due to the continued presence of the chestnut blight pathogen in eastern states. Michigan is one of the only states where growers routinely plant both Chinese and European hybrid chestnut species, sometimes side by side in commercial orchards. Research in Michigan has demonstrated that European hybrid chestnuts produce 2 to 5 times more nuts and go into production much sooner than Chinese chestnuts; however, Michigan growers are faced with the challenge of chestnut blight infections reducing orchard productivity. It is also important to note that interplanting of Chinese and European chestnuts also leads to a pollen-generated problem called internal kernel breakdown (IKB) where European X Japanese hybrid trees produce nuts with decaying kernels when pollinized by Chinese chestnut trees.

It is also important to understand that Chinese-like trees can become infected with blight. These trees are probably not pure Chinese, but have originated from seed collected from a Chinese chestnut tree pollinized by an American chestnut tree. These crosses (Chinese X American hybrids) are blight susceptible in the sense that they may not die from blight, but they will allow the pathogen to grow, colonize and sporulate all over the tree, spreading the chestnut blight fungus for many miles around the infected tree(s). As these blight “tolerant” trees get older, they get larger and the infections increase in size.

There is a lot of information regarding chestnut blight, though much of it is focused on forest grown American chestnut. For orchard production, it is critical to understand the following: 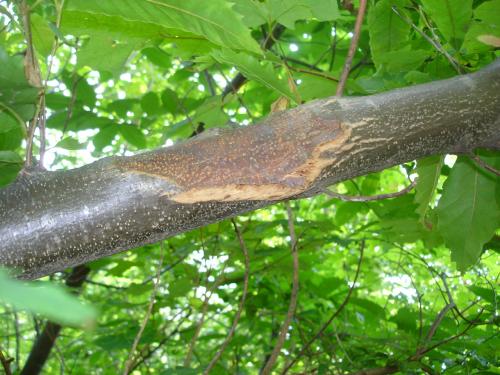 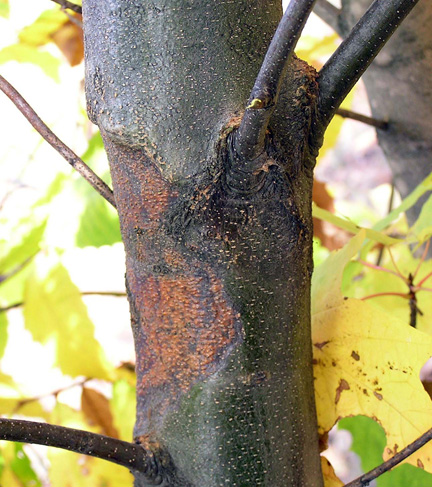 Photo 1. Canker caused by a highly virulent form of Cryphonectria parasitica on American chestnut. Note how the pathogen causes the collapse of stems along the outer surface of the stem. If the canker girdles the stem, then transport of nutrients is disrupted and all plant material beyond the canker dies back.

Cryphonectria parasitica was also introduced accidently to Europe where the European chestnut suffered a similar disease epidemic. However, about twenty years after epidemic spread, some European chestnut trees began to “recover” from infection. Recovery was not due to the spread of a few highly resistant chestnut trees, but instead was due to the spread of a virus that infects the pathogen. The virus resides in the pathogen’s cytoplasm, slowing growth and reducing spore production. In essence, it makes the pathogen sick in a manner that allows infected chestnut trees the chance to recover from the disease. Recovery occurs as the tree walls off the canker with wound tissue, which prevents the pathogen from girdling infected stems or branches. Over time the tree closes the canker and further pathogen spore production is prevented. These viruses are now called hypoviruses because they reduce pathogen virulence. Hypoviruses have been used extensively as a biological control agent in Europe where the chestnut industry has recovered from the severe epidemic that started in the 1950s. In addition, hypovirus mediated recovery has occurred naturally in at least four Michigan populations of American chestnut. These examples all indicate that hypoviruses may be a disease management option for controlling chestnut blight in Michigan’s chestnut orchards, but hypovirulence is not registered for use at this time. Additionally, there are major practicality barriers to on-farm use that need to be addressed. 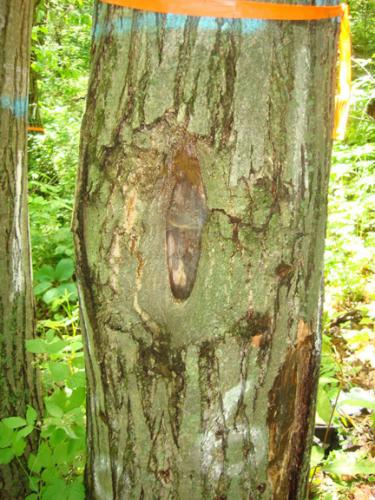 Photo 2. Canker with hypovirus. The tree has enclosed the canker with wound tissue that stops canker expansion. The canker in this picture has died (bare wood at the center of the stem, and the wound tissue is slowly covering the old infection site.

Phytophthora root rot of chestnut is primarily a disease of the root and lower trunk. While the top of the tree may be showing symptoms of wilting or death, the infection is occurring on the roots and at the crown of tree—that area between the root and trunk. Phytophthora root rot kills trees in forests and orchards of Europe, Australia, and North America. I have not heard about its presence in Chinese chestnut orchards in China, Japan or Korea.

Below is a photo of Phytophthora root rot in an Australian chestnut orchard. The dead trees are surrounded by trees with thinning tops indicating the infestation is spreading through the soil. Dry soils in summer only exasperate the condition of non-functioning infected roots. Obviously, this area of the flat orchard floods during the rainy season. 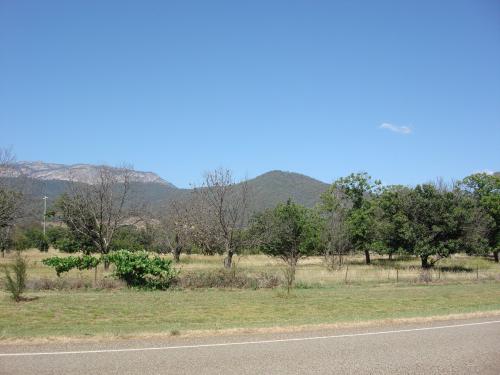 Root rot in Europe has been a major problem for chestnut production in forests and farms. Management in forests is different than on farms. In forest environments, managing natural water drainage is the primary focus. On farms, water drainage management and individual tree treatment is attempted. 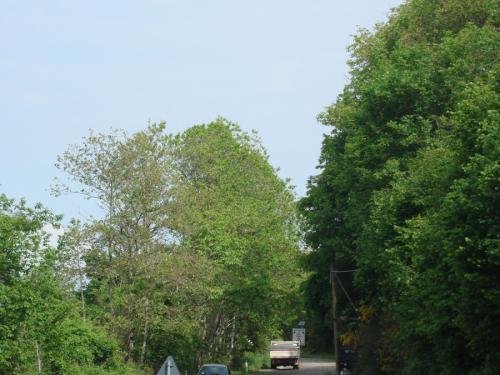 Above, the top of a European chestnut tree in Italy is affected by Phytophthora root rot. The tree to your left is thinning and the tree next to it has yet to show obvious symptoms. 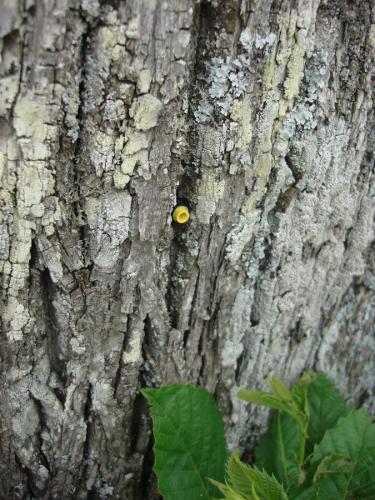 An injection site for Phytophthora root rot management in the trunk of a large European chestnut tree in Italy.

To diagnose root rot in the field, we peel back the outer bark until we see a discolored, black or brown coloration. This is dead tissue and it is referred to as the “flame”—as if a hot flame in the roots has scorched the trunk of the tree. 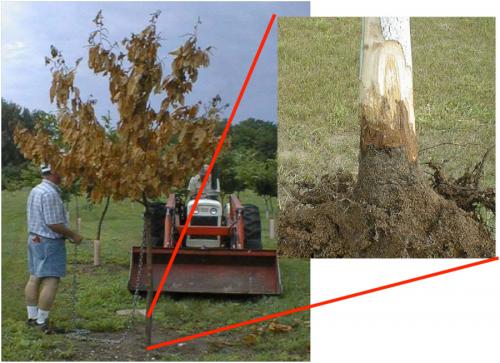 In the above photo, a non-grafted, seedling Chinese chestnut tree from an orchard in Michigan, which is suppose to be resistant to Phytophthora root rot (Chinese trees were reported to be resistant) is pulled and it shows the “flame” symptoms root rot. Later in the laboratory, a Phytophthora strain was isolated and it proved to be a unique strain.

Phytophthora can be carried from nursery to your plantation or it can already be at your orchard naturally or from other trees that came from other nurseries. It usually appears where roots are wet for extended periods of time. If trees die in a wet area, it is not always because of Phytophthora root rot, as chestnut roots do not do well in we soil, even if Phytophthora is not present. Stay away from wet soils that are low in oxygen. This is the primary reason we say to plant in well-drained soils. 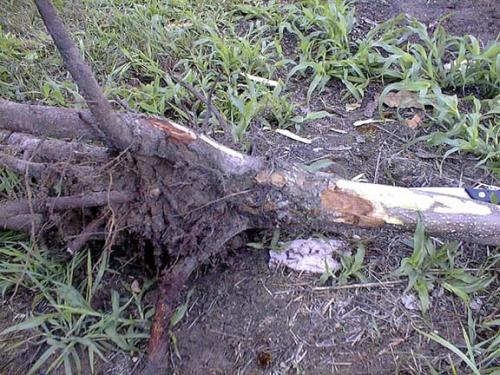 The tree in the photo above was pulled a season after planting. After a series of trees died in an orchard, the grower ordered more trees and re-planted them in the same holes from which the dead tree was removed. Most of the replaced trees rapidly died of root rot and we assume the original trees died of root rot. Root rot will remain in the soil for several years. This root rot was assumed to be from unknown previous sources as a wooded area had been converted to a cherry orchard and then changed over to a chestnut orchard. The cherry orchard and the chestnut orchard did not have good production records.

A problem that mimics chestnut blight in its appearance and damage to the tree is sunscald. Usually on the south side of the tree, the cankers that erupt due to bark death can look similar to chestnut blight. Sunscald can be managed by reflecting with latex paint. In Michigan, the sun reflects off the snow in the winter warming the bark on the south side of the tree. This action can “burn” the epidermis of a young tree or warm it sufficiently during the day that when night falls, the tissue is exposed to extremely cold and damaging temperatures. Weak, secondary pathogens can enter the bark at these wounds and the tree may suffer chronic infections and poor growth.

Is caused by various species of the fungal-like, water mold pathogen Phytophthora has been observed on dead and dying chestnuts in Michigan. Ironically, the trees that have been most susceptible are Chinese trees that are generally thought of as resistant to root rot disease. Michigan soils do not harbor the intensely aggressive pathogen Phytophthora cinnamomi that does kill American and European chestnuts. However, there are other species of Phytophthora in Michigan soils that can apparently kill Chinese chestnuts, and growers need to establish orchards in well-drained soils to escape root rots.

Michigan has not found Sclerotinia pseudotuberosa nut rot, a serious problem in Europe or Phomopsis castanea nut rot a serious problem in New Zeeland and Australian orchards. A nut decay has appeared in Michigan and primarily on the nuts from the cultivar ‘Colossal’ (and other European/Japanese hybrids, also) when they are pollinized by Chinese chestnut trees. The nut decay is called internal kernel breakdown (IKB) and 30 to 40 percent of the nuts from ‘Colossal’ trees when pollinized by Chinese trees can have IKB.