Like many plants, chestnuts are sensitive to the saliva of potato leafhopper (PLH) which is injected by the insect while feeding. Damage to leaf tissue can cause reduced photosynthesis which can impact production and quality, and damage the tree. Most injury occurs on new tissue on shoot terminals with PLH feeding near the edges of the leaves using piercing-sucking mouthparts. Symptoms of feeding appear as whitish dots arranged in triangular shapes near the edges. Heavily damaged leaves are cupped with necrotic and chlorotic edges and eventually abscise from the tree. Severely infested shoots produce small, bunched leaves with reduced photosynthetic capacity (Figure A). 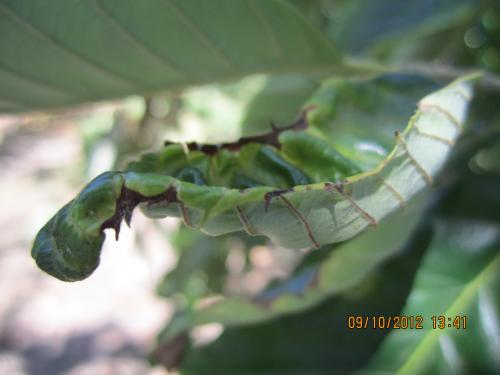 Adult leafhoppers are pale to bright green and about 1/8 inch long .  Adults are easily noticeable, jumping, flying or running when agitated. The nymphs (immature leafhoppers), are pale green and have no wings but are very similar in form to the adults (Figures B and C). PLH move in all directions when disturbed, unlike some leafhoppers which have a distinct pattern of movement. The potato leafhopper can’t survive Michigan’s winter and survives in the Gulf States until adults migrate north in the spring on storm systems.

Scouting should be performed weekly as soon as leaf tissue is present to ensure detection early and prevent injury. More frequent spot checks should be done following rain storms which carry the first populations north. For every acre of orchard, select 5 trees to examine and inspect the leaves on 3 shoots per tree (a total of 15 shoots per acre). The easiest way to observe PLH is by flipping the shoots or leaves over and looking for adults and nymphs on the underside of leaves.  Pay special attention to succulent new leaves on the terminals of branches. For more information on insecticides available for the treatment of potato leafhopper refer to the current Chestnut Management Guide.

Japanese beetle (JB) adults are considered a generalist pest and affect many crops found on or near grassy areas, particularly irrigated turf. Japanese beetle grubs feed on grass roots in early spring and again in the fall and can cause significant damage to turf. Larvae prefer moist soil conditions and do not survive prolonged periods of drought. Adult JB (Figure D) emerge in early July and feed on hundreds of different plant species. Adult beetles feed on the top surface of leaves skeletonizing the tissue (Figure E). If populations are high, they can remove all of the green leaf material from the plants.

There are no established treatment thresholds or data on how much JB damage a healthy chestnut tree can sustain, but growers should consider that well-established and vigorous orchards will likely not require 100% protection.  Younger orchards with limited leaf area will need to be managed more aggressively. Managing JB can be a frustrating endeavor as they often re-infest from surrounding areas, especially during peak adult emergence in July.  This re-infestsation is often misinterpreted as an insecticide failure, but efficacy trials have shown that a number of insecticides remain effective treatment options. JB adults are a substantial insect and measure 3/8 to 1/2 inch long. The thorax is green and wingcovers are copper colored. There are five tufts of white hairs on both sides of the abdomen and a pair of tufts on the end of the abdomen that can help distinguish the JB from other look-alike species. The legs and head are black. Visual observation of adults or feeding damage is an effective scouting technique. Growers should scout along a transect through orchards at least weekly until detection, paying special attention to the tops of trees.  Because of their aggregating behavior, they tend to be found in larger groups and are typically relatively easy to spot.  Pheromone and floral baited traps are available and potentially can help indicate the arrival of adults and help estimate the potential pest pressure but are not considered effective for trapping out JB. Growers considering the traps should remember that they may attract Japanese beetle adults from the surrounding area and contribute to damage. For more information on insecticides available for the treatment of Japanese beetle refer to the current Chestnut Management Guide.

Rose chafers (RC) are considered a generalist pest and affect many crops, particularly those found on or near sandy soils or grassy areas. The adult beetles feed heavily on foliage and blossom parts of numerous horticultural crops in Michigan and can cause significant damage to chestnut orchards.  RC can be particularly damaging on young trees with limited leaf area.  Like Japanese beetle, RC skeletonize the chestnut leaves but tend to consume larger pockets of tissue, with damage similar to caterpillar feeding than the fine lace-like leaf that results from Japanese beetle feeding (Figures F and G). 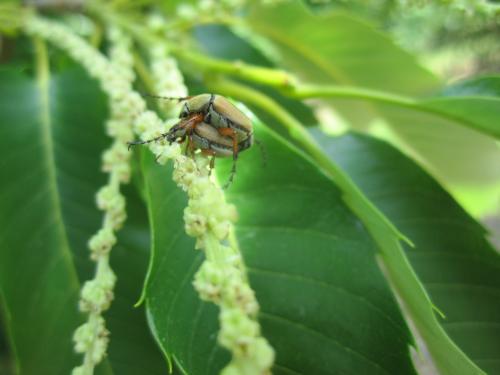 They are often found in mating pairs and fly during daylight hours.  Visual observation while walking a transect is the best method for locating them.  Because of their aggregating behavior, they tend to be found in larger groups and are typically relatively easy to spot.  There are no established treatment thresholds or data on how much damage a healthy chestnut tree can sustain from rose chafer, but growers should consider that well-established and vigorous orchards will likely not require complete control.  Younger orchards with limited leaf area will need to be managed more aggressively. The rose chafer is a light tan beetle with a darker brown head and long legs and is about 12 mm long (Figure H). There is one generation per year. Adults emerge from the ground during late May or June and live for three to four weeks. Females lay groups of eggs just below the surface in grassy areas of sandy, well-drained soils. The larvae (grubs) spend the winter underground, move up in the soil to feed on grass roots and then pupate in the spring. A few weeks later, they emerge from the soil and disperse by flight. Male beetles are attracted to females and congregate on plants to mate and feed. For more information on insecticides available for the treatment of rose chafer refer to

Chestnut trees are susceptible to feeding damage from a number of spider mite species including European red mite and two-spotted spider mites.  Affected leaves appear mottled, stippled, or bronzed and become brittle leading to early defoliation and reduced photosynthetic activity.  Reduced photosynthesis can lead to reduced nut size and return crop load in subsequent years as well as increased sensitivity to winter injury.  At this time no treatment thresholds are established for mites in chestnut, but evidence from crops like cherry indicate that some level of feeding is likely tolerable and that higher populations can be tolerated as the season progresses through summer. European red mite appears to be the more prevalent mite species for chestnut producers, but growers should keep an eye out for two-spotted spider mites as well.

European red mites (ERM) overwinter as eggs in bark crevices and bud scales. Eggs are small spheres, about the size of the head of a pin with a single stipe or hair that protrudes from the top (this is not always visible). Eggs can be viewed with a hand lens or the naked eye once you have established what you are looking for. Growers can scout for overwintering eggs and early nymph activity in the spring to assess population levels in the coming season. As temperatures warm, overwintering eggs hatch and nymphs move onto the emerging leaves and start feeding. Adult ERM are red in color and have hairs that give them a spikey appearance (Figure I). Adult and nymph feeding occurs primarily on the upper surface of the leaves (Figure J). This first generation is the slowest of the season and typically takes a full three weeks to develop and reproduce. This slow development is due to the direct link between temperature and mite development. Summer generations, favored by the hot and dry weather are able to complete their lifecycles much faster with as little as 10 days between generations under ideal conditions.

Growers should also be looking for two-spotted spider mites (TSSM) when scouting (Figure K).  TSSM have 2 distinct spots located on the front half of the body. Males are much smaller than females, and have a distinctly pointed abdomen. TSSM eggs are spherical and translucent and are often found along leaf veins. TTSM nymphs and adults can be a variety of colors depending on the time of the year and stage of development. Potential colors include orange, brown, pale yellow or green so growers are encouraged to use the spots as the key identification characteristic. TSSM overwinter as adults around the base of trees in the duff.  As the weed or grass cover under the trees dries out TSSM start to move back up into the canopy in higher numbers from tight cluster through harvest. Like ERM, TSSM damage the tree by feeding on the underside of the foliage and give the leaves a dirty appearance when populations become high and leaf surfaces are coated in eggs, discarded exoskeletons from molting and webbing. 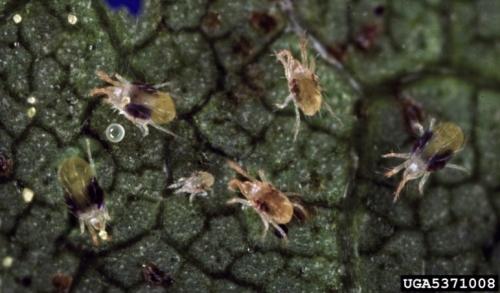 As growers are scouting, they are encouraged to remember that not all mites are bad. Consider documenting the levels of predacious mites in your orchard. If healthy populations of mite predators exist, they will continue to feed on plant parasitic eggs and nymphs and can be an effective component of your mite management program. The three most important predaceous mites are Amblyseius fallacis (Phytoseiidae), Agistemus fleschneri (Stigmaeidae), and Zetzellia mali (Stigmaeidae) (see “A Pocket Guide for IPM Scouting in Michigan Apples” – E-2720 for pictures).  Predaceous mites are smaller than adult ERM and TSSM, but they can be seen with a hand lens and typically move very quickly across leaf surfaces.

Mite control starts with monitoring early in the spring looking for the overwintering eggs (ERM) or adults (TSSM) and assessing the mite pressure. Ideally, growers will be using limited insecticides with miticidal activity in their season long programs as that protects their beneficial mite populations and provides for natural control. If pest mite populations are high enough to require control, dormant superior oil applications are an effective method of treatment. Ensuring adequate coverage is critical to attaining optimal control on problem sites as oil alone acts to smother mites and eggs. If you are applying an oil with an additional insecticidal property (such as those containing the neem extract azadirachtin) coverage is still critical as many are insect growth regulators and have antifeedant properties.

Oil application comes with a risk of phytotoxicity particularly as green tissue emerges. It is recommended that growers do a small test spray if they have not used dormant oils in the past.  Keep in mind too that different cultivars may have different sensitivities and proceed with caution. Severely stressed trees should never be sprayed with oil and growers are advised to keep in mind that temperature and humidity also play a role in the risk of phytotoxicity. Temperatures above 80F and slow drying time (high humidity) increase the chance of damage. Oil also has some potential compatibility issues growers should be aware of including Captan and sulfur. Lastly, it is not recommended that oil be applied within a 48 hour window prior to and following freezing temperatures due to decreased efficacy and potential plant damage. Read and follow all label directions carefully to minimize the risk of spray damage.

For more information on pesticides to control mites refer to the current Chestnut Management Guide.