We analyzed the high risk pathways for the introduction of exotic pests in nurseries and ornamental plants in Michigan. Using phytosanitary data from the Department of Homeland Security/Customs and Border Protection/Agriculture Quarantine Inspection Program, we determined the commodity groups and countries of origin that were most commonly associated with pest detections at U.S. ports of entry during 2006-2008. This analysis focused only on records for those imported commodities whose final destination was Michigan. Finally, building on our previous work (Colunga-Garcia et al. 2009 and Colunga-Garcia et al. 2010), we determined the potential hot spots for the establishment of exotic pests in Michigan based on the amount of imports and host availability.

We constructed a lattice of cells (diameter = 5 km ~ 3.1 miles) for the entire state of Michigan to represent potential destination sites (Figure 1). This cell diameter was arbitrarily selected to represent an exotic pest with a maximum dispersal radius of 2.5 km. Dispersal potential of the Asian longhorned beetle, for instance, reaches 2.4 to 2.6 km (Smith et al. 2004). Emerald ash borer females can fly on average 1.7 km (Taylor et al. 2005). In the remainder of this report, we will use the word “site” to refer to each individual cell within the lattice. 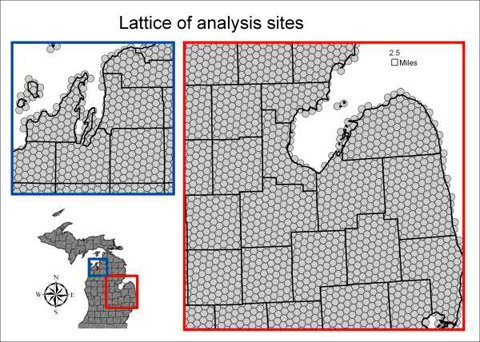 We estimated the amount of tree cover (canopy) at each site of the lattice (Figure 1) as an indicator of host availability as follows:

To quantify the area of forestland upland at each site, we added the area of the three forest classes provided in the 2001 National Land Cover Data (2001 NLCD) (see classes 41 to 43 ) Urban greenspace at each site was estimated as:

The 0.78 value in Equation 2 represents the proportion of urban greenspace that is made of tree cover. The value of 0.78 was actually an estimate obtained for Detroit (see Colunga-Garcia et al 2010); however, given the lack of data for other parts of Michigan, we used that value for the entire state.

We used the proportion of imported products (associated to pest detections at ports of entry) arriving at each site of the lattice (Figure 1) as an indicator of the potential for entry of exotic pests as follows:

To determine the tonnage of imported products we obtained data on regional freight transport into and within the U.S. using the Freight Transportation Framework 2 (FAF2 ) database (the newest version FAF3 had not been released at the time of the analysis). The FAF data, based primarily on the Commodity Flow Survey, is computed every five years. The data used in this analysis corresponded to data from 2002. We focused only on data for imports whose final destination was any of the following FAF regions influencing Michigan (see map of U.S. FAF regions here): 32 (Chicago-Naperville-Michigan City CSA), 34 (remainder of Indiana), 48 (Detroit-Warren-Flint CSA), 49 (Grand Rapids-Wyoming-Holland CSA), 50 (remainder of Michigan) and 80 (remainder of Ohio). We selected commodities and world regions most commonly associated to pest detection at ports of entry during 2006-2008, whose final destination were any of the aforementioned FAF regions. Commercial land use at each site and FAF region was computed using the high intensity developed land in the 2001 NLCD (see class 24 in the 2001 NLCD class definitions).

For each site in the lattice (Figure 1), we estimate the probability of establishment of an exotic pest as follows:

Where both host availability and imported products were estimated as described in Equations 1 and 4, and EXP = e.

Establishment estimates at each site were computed for each of the selected combinations of world regions’ commodity group. Using establishment values for each world region’s commodity group combination, we estimated the Moran’s I, a local indicator of spatial association (Anselin 1995, Anselin et al. 2006). This technique allowed us to detect clusters of sites with high establishment values (i.e., values that were significantly higher than the mean) (Fortin and Dale 2005). To obtain the general hot spots map, we counted the number of world region’s commodity group combinations where a site was part of a hot spot. The resulting number was then standardized on a 1-10 scale where 10 corresponded to the site(s) most frequently found as part of a hot spot.