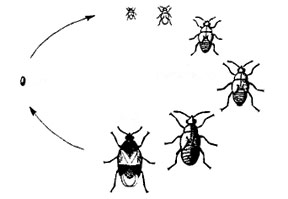 The order Hemiptera consists of the “true bugs.” Though many species in this group are plant feeders, others are predaceous.

True bugs exhibit simple metamorphosis, growing from egg through several juvenile stages to winged adult. The immature stages, called nymphs, look like adults with shortened wing pads instead of fully developed wings. All true bugs have piercing-sucking mouthparts that are formed into a straw-like beak. Both nymphs and adults are predaceous.