Distribution: Southeastern Canada and in most fruit-growing states in eastern US. 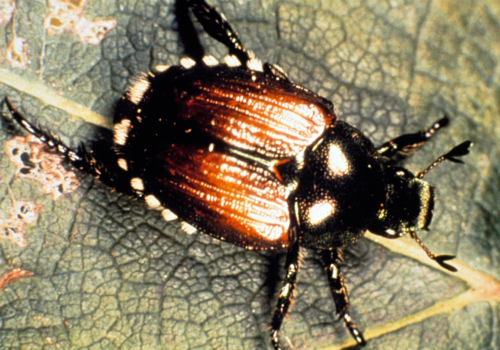 Adults are metallic green-bronze with reddish wing covers and several white spots near the abdomen tip and along the sides. Mid-Atlantic Orchard Monitoring Guide
A

Japanese beetles can be present from June through September. Japanese beetle adults are metallic green or greenish bronze with reddish wing covers and several white spots near the abdomen tip and along the sides. They have 6 or 7 small tufts of white hair around the posterior (rear) abdomen, just under the wing covers. Japanese beetles are active during the the day and feed on many species of trees, shrubs and flowers, sometimes causing serious damage to roses, linden trees, grapes and others. Adults are known to feed on over 300 species of plants, although some are preferred over others. Eggs are laid in late July and August. The eggs hatch in about 10 days and the small (1/8 inch long) grubs begin feeding on turf roots. Larvae are larger C-shaped grubs that live in the soil. They grow larger as they feed until late October when they are nearly 3/4 inch long. When the soil temperature cools below 50° F the grubs begin to move deeper into the soil to overwinter. The move back into the root zone and start feeding on turf roots in April, but new damage is rarely observed from Japanese beetle grubs in the spring.