Soybean producers and agribusiness representatives can download the results from 14 different on-farm research projects conducted by the SMaRT program in 2013.

The 2013 SMaRT (Soybean Management and Research Technologies) on-farm research report will be mailed to 12,000 Michigan soybean producers in early January 2014. It is also available online at the Michigan Soybean Promotion Committee website. The online version is the best way for agribusiness managers, sales representatives and agronomists to access the report as it will be mailed to only Michigan soybean producers.

The report summarizes the results from 14 different soybean projects evaluating products, management practices or equipment having the potential to increase soybean yields and income. Many of the projects were conducted at multiple sites in 2013 and some were conducted over multiple years. Forty-eight soybean producers conducted 63 individual on-farm trials in 2013. The trials fall within five categories: 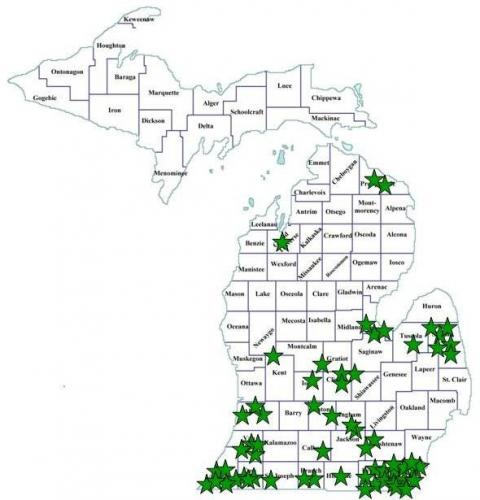 One of the comments I’ve heard most often about past SMaRT research reports is there is little or no difference between the treatments and the untreated control in some of the trials (no magic bullet was found). This is the case again in 2013. However, this is still valuable information as there are two components to increasing income – increasing yields and reducing costs. If the new treatment does not perform significantly better than the untreated control when evaluated across multiple locations and over several years, producers can save money and increase income by not using the product, management practice or equipment.

There were some practices and products that significantly increased soybean yields and income in 2013. In our white mold trial, foliar fungicide applications increased soybean yields and reduced disease incidence compared to the untreated control. Applying manganese sulfate monohydrate to correct manganese deficiency symptoms in muck soils was more profitable than using an EDTA chelate product. In the only combine speed trial conducted in 2013, a harvest speed of 3 miles per hour was significantly more profitable than operating the combine at 5 miles per hour. In one of the tillage trials, a single pass of a soil finisher in untilled corn stalks increased soybean yields by 1.4 bushels per acre and income by $8 per acre.

The research report was a team effort. However, please contact me, Mike Staton, if you have any questions or comments regarding the report. You can reach me at 269-673-0370 or staton@msu.edu.