2017 report states outdoor reaction is the economy of the future

Outdoor Industry Association's third edition on the Outdoor Recreation Economy report highlights the magnitude and importance of the recreation economy in the United States.

Since 2007,  the Outdoor Industry Association (OIA) has released a national report every 5 years describing the importance and magnitude of the outdoor recreation economy (ORE) in the United States. The most recent edition was released in early 2017 highlighting the growth of the industry between 2011 and 2016. This report “takes a broader view of the growing industry and its shifting demographics.” The growth of the industry tells the story of the importance of outdoor recreation across the United States.

In summary, the ORE generates significant economic benefits to communities across the country. The report states that the ORE is responsible for:

The activities that make up the ORE fit into a number of tourism niche areas, such as ecotourism, nature-based tourism and adventure tourism. Some activities that tourist would recognize as central to the outdoor recreation economy are camping, fishing, hunting, snow sports, trail sports (hiking, backpacking, rock climbing), water sports (kayaking, rafting, surfing, sailing or scuba diving) and wheel sports, (bicycling, skateboarding). For the complete ORE activity list, consider reviewing the 2017 report.

The Report doesn’t identify the ORE for each state, but it does group states by region. For example, Michigan is grouped with Wisconsin, Illinois, Indiana, Ohio and considered to be the East North Central region. The ORE in this region is responsible for: 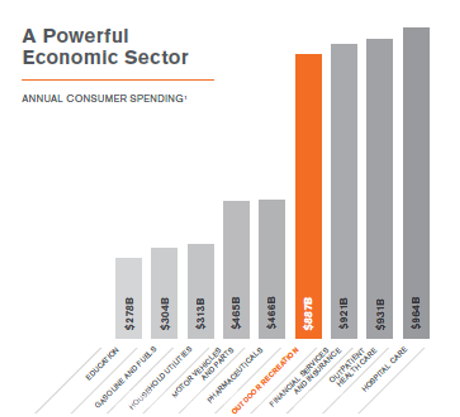 Graph included in the OIA 2017 report. Data from the Bureau of Economic Analysis, Personal Consumption Expenditures by Type of Product

In Michigan, we received 113.4 million visitors in 2014, which helps sustain the 214,000 jobs in the industry annually. All of the tourism activity in Michigan generates approximately $2.4 billion in state and local taxes. In the absence of these taxes, each household in Michigan would have to pay $640 to fill the gap. Globally, tourism accounts for 1 in 11 jobs, $1.5 trillion in exports and 6 percent of the world’s exports. More information on these statistics can be found in the Michigan State University Extension article, International tourism continues to climb without interruptions.