4-H clubs in Michigan are doing their part to raise awareness, support and funds to help those affected by cancer.

EAST LANSING, Mich. -- Cancer is a topic that many will shy away from, partly because of all the uncertainties it can bring. Yet, almost everyone is affected by this dreaded disease; whether by having a form of cancer personally or knowing someone who has it, most have witnessed the hardships that accompany this awful diagnosis.

4-H clubs in Michigan are doing their part to raise awareness, support and funds to help those affected by cancer.

The Alpena County 4-H Beef Club is one group taking on this cause. In the beginning of the club’s 2012-2013 year, members and club leader Emily Eagling discussed their desire to participate in some form of community service. In further brainstorming sessions, the group quickly realized that each of them knew someone who was affected by cancer-- specifically breast cancer. A project called Hooves for Hope, playing on the type of 4-H club they are, was created with a goal to assist in early detection of cancer.

From this point on, the 13- to 19-year-old club members embarked on a journey that embodies 4-H’s Revolution of Responsibility. Turning what was once an idea into action defines this 4-H mission to have youth make lasting, positive impacts on their communities.

Pink T-shirts were designed and sold with proceeds going to the Alpena Regional Medical Center (ARMC) Mammography Fund. The ARMC Cancer Center has partnered with the University of Michigan Health System for over 10 years and provides chemotherapy, radiation therapy and the identical treatment protocols available at the main Cancer Center headquarters in Ann Arbor. The staff at the Alpena site prides themselves on being able to treat close to 97 percent of all cancer types, with only the rarest forms requiring patients to travel south to Ann Arbor. 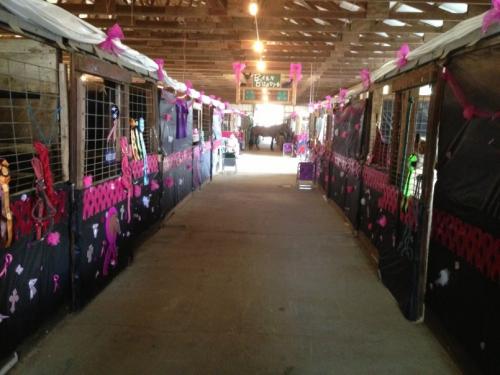 Hooves for Hope funds are donated to help pay for mammograms. In a year of selling shirts, Hooves for Hope has successfully raised funds to cover the entire cost for one mammogram.  Gearing up for a new 4-H year, the club remains dedicated and optimistic about continuing their efforts to help detect and identify breast cancer in its early stages.

“We’ve told the Cancer Center that it may take us six months-- it could be sooner or anytime down the line-- but the kids are still interested in raising money for the Mammography Fund and continue their community service efforts,” Eagling said.

The premise of this community service project has assisted another Michigan 4-H club member in detecting cancer. In the past year, Jackson County 4-H club leader Dawn Kelly was diagnosed with breast cancer. She said that the positive community responses of 4-H’ers to benefit cancer awareness and treatment have helped her with her fight.

As the Jackson County Barn Buddys, and their parents became aware of Kelly’s situation they, immediately wanted to help their leader. During this same time, the club also received news that a 1-month-old baby in their community was battling stage 3 neuroblastoma cancer. It was the youth’s goal to raise awareness of breast cancer and childhood cancer from that point on. In addition, Barn Buddys invited other clubs to participate in their efforts to bring cancer awareness to communities. So, when the 2013 Jackson County Fair kicked off, three clubs joined forces to show their support by raising awareness of all cancers, creating a signature board for the community to sign and show their support, and decorating their designated areas of the barn.

“Our group is honored to see that all their efforts in raising awareness not only have spread through the local community but now are being extended even further,” Kelly said.

When the Jackson County Fair concluded, so did Kelly’s cancer treatment. A celebration of her long journey was acknowledged appropriately by a pink ribbon, for breast cancer, and cake, and was enjoyed by club members, friends, family members and all who came together to show their support.