This October, David Sugalski, better known as The Polish Ambassador (TPA), held a concert in Kalamazoo. His events, however, are not the typical music venues that concertgoers would think of.

This October, David Sugalski, better known as The Polish Ambassador (TPA), held a concert in Kalamazoo. His events, however, are not the typical music venues that concertgoers would think of.

TPA is an electronic musician with a twist -- his music is an expression of joy and self-expression with an eco-friendly foundation. TPA’s mission is to live in a world that exhibits mutual support between people and the environment in which they live. This idea leads to a balanced earth and social change.  His festivals consist of a concert followed by a day dedicated to helping a project that promotes permaculture.

Kalamazoo was a recent stop on his “Pushing Through the Pavement” tour to implement social impact on Oct. 26.

Lending a hand is a known staple among the 4-H community, so when concertgoers, volunteers and Kalamazoo residents participated in the action day project of planting an edible forest at the Riverview Launch property, Michigan 4-H leaders Jim Goodacre, Eastwood Community club leader, and Molly Cole, Copper Community club leader, saw a natural connection between this event and 4-H, and decided to lend a hand. 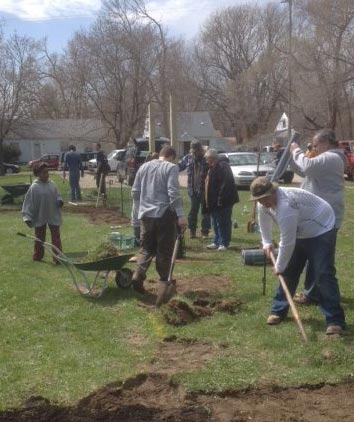 The “public food forest” is a collection of plants, trees and bushes that provide food and also restore nutrients to the soil. The edible forest project area is about 200 square feet in the urban setting of Kalamazoo. It contains native species that were already growing on the property as well as many donated trees, including pecan, plum and hackberry trees; bushes of raspberries and gooseberries; and goumi and gray alder trees to restore soil nutrients. There are also a redwood tree and a Sequoia tree, donated by David Milarch, the keynote speaker for this event. The redwood is known for its ability to consume carbon dioxide, thus helping to fight against climate change.

Michigan State University Extension 4-H Youth Development partnered with the Land Bank to contribute to this project and the goals behind the creation of this edible forest. Kalamazoo 4-H program coordinator Evan Granito was the event coordinator and helped involve 4-H in these efforts.

“This project was made possible through a broad coalition of new community partners, many of whom had never heard of 4-H before,” Granito said. “By teaming up with a thriving group of organic urban farmers in Kalamazoo, and using those partnerships to leverage our collaboration with The Polish Ambassador, we demonstrated that 4-H is a relevant and valuable resource for urban youth.”

Followers of this electronic dance music artist quickly realized that stereotypes associated with 4-H – such as it being only for kids who live in the country -- don’t begin to tell the whole story. They discovered that it is a program with valuable resources for developing life skills in youth from a variety of backgrounds. Granito said that having club leaders from urban locations present at the event helped attendees who live in the city learn more about how 4-H can be incorporated into urban settings such as Kalamazoo.

“This event was a great way to show that 4-H is a versatile youth development program with a lot more to offer than just livestock and the county fair,” Granito said.

The skills that youth from urban locations gain from 4-H programs contribute to a successful future for these children and teens, he pointed out. Becoming involved in projects at a young age leads to personal growth and makes community service a habit.

“My takeaway from all this is that experiential learning opportunities often arise in unexpected places, and that pursuing non-traditional partnerships like this is the best way to move 4-H forward to involve previously untapped audiences,” Granito said.

Michigan 4-H offers youth the opportunity to develop planting and gardening skills, soils knowledge and environmentalism through the plants, soils and gardening, and the environmental and outdoor education programs, which parallel the vision of The Polish Ambassador’s “Pushing Through the Pavement” tour.

For more information about getting involved with such programs through Michigan 4-H or volunteer opportunities, visit 4h.msue.msu.edu.