Tigers take the night shift to coexist with people

Tigers don’t have a reputation for being accommodating, but a new study indicates that the feared and revered carnivores in and around a world-renowned park in Nepal are taking the night shift to better coexist with their human neighbors.

The revelation that tigers and people are sharing exactly the same space – such as the same roads and trails – of Chitwan National Park flies in the face of long-held convictions in tiger conservation circles. It also underscores how successful conservation efforts need sciences that takes into account both nature and humans.

“As our planet becomes more crowded, we need to find creative solutions that consider both human and natural systems,” said Jianguo “Jack” Liu, who with PhD student Neil Carter and three Nepalese scholars wrote a paper published in this week’s Proceedings of the National Academy of Sciences (PNAS). “Sustainability can be achieved if we have a good understanding of the complicated connections between both worlds. We’ve found something very interesting is happening in Nepal that holds promise for both humans and nature to thrive.”

Liu is the director of the Center for Systems Integration and Sustainability (CSIS) at Michigan State University, where Carter studies.

Conventional conservation wisdom is that tigers need lots of people-free space, which often leads to people being relocated or their access to resources compromised to make way for tigers. 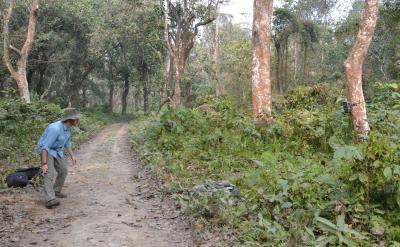 Carter spent two seasons setting motion-detecting camera traps for tigers, their prey and people who walk the roads and trails of Chitwan, both in and around the park. Chitwan, nestled in a valley of the Himalayas, is home to about 121 tigers. People live on the park’s borders, but rely on the forests for ecosystem services such as wood and grasses. They venture in on dirt roads and narrow footpaths to be â€˜snared’ on Carter’s digital memory cards. The roads also are used by military patrols to thwart would-be poachers.

Carter’s analysis of the thousands of images show that people and tigers are walking the same paths, albeit at different times. Tigers typically move around at all times of the day and night, monitoring their territory, mating and hunting. But in the study area, Carter and his colleagues discovered that the tigers had become creatures of the night. The camera’s infrared lights document a pronounced shift toward nocturnal activity. People in Nepal generally avoid the forests at night. Essentially, quitting time for people signals starting time for Chitwan’s tigers. So far, it appears tiger population numbers are holding steady despite an increase in human population size.

“It’s a very fundamental conflict over resources,” Carter said. “Tigers need resources, people need the same resources. If we operate under the traditional wisdom that tigers only can survive with space dedicated only for them, there would always be conflict. If your priority is people, tigers lose out. If your 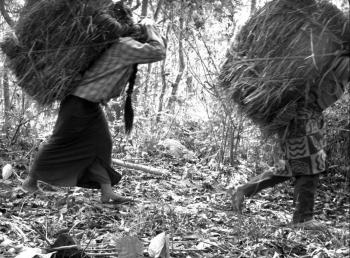 priority is tigers, people lose out.

“Conditions for tigers in Chitwan are good,” he continued. “Prey numbers are high, forests outside the park are regenerating, and poaching of tigers and their prey is relatively low. However, people of different stripes, including tourists and local residents, frequent the forests of Chitwan. Tigers need to use the same space as people if they are to have a viable long-term future. What we’re learning in Chitwan is that tigers seem to be adapting to make it work.”

Carter’s cameras give a rare look at activity. Tigers globally may be out of sight, but not out of mind. Since the start of the 20th century, the world’s population of wild tigers has dropped by 97 percent to approximately 3,000 individuals. The world’s remaining tigers are being pushed into small spaces, and being able to share that space with humans is a critical survival skill.

“There appears to be a middle ground where you might actually be able to protect the species at high densities and give people access to forest goods they need to live,” Carter said. “If that’s the case, then this can happen in other places, and the future of tigers is much brighter than it would be otherwise.”

In addition to Liu, who holds the Rachel Carson Chair in Sustainability, and Carter, the PNAS paper “Coexistence between wildlife and humans at fine spatial scales” was written by Binoj Shrestha of the Institute for Social and Environmental Research in Nepal, Jhamak Karki of Nepal’s Department of National Parks and Wildlife Conservation and Narendra Man Babu Pradhan of the World Wildlife Fund in Nepal.

The research was funded by the National Science Foundation, NASA, the U.S. Fish and Wildlife Service Rhinoceros and Tiger Conservation Fund and MSU AgBioReseach. It was part of the Partnership for International Research and Education among MSU, the University of Michigan and seven other institutions in the United States, Nepal, and China.

More about the research, with videos and photo galleries

To know a tiger is at least to start tolerating them, study shows