More than 30% of nonindigenous species are shown to have environmental or socioeconomic impacts and are therefore considered to be invasive.

In 1993, a group of invasion biologists published a comprehensive review (Mills 1993) of the nonindigenous flora and fauna of the Great Lakes basin that formed the foundation for subsequent research and management, including the original list of established nonindigenous species tracked through the Great Lakes Aquatic Nonindigenous Species Information System (GLANSIS). In the 25 years since the publication of this foundational work, many additional species have invaded the Great Lakes, and we have been able to update records for many others using both historic collections and more recent information from academia, agency, and citizen science efforts.

This recent period also saw a major shift in the management of non-native species, particularly for the ballast water vector that had been documented in Mills 1993. Ballast exchange requirements on the Great Lakes started in 1993 with an exemption for vessels declaring ‘No Ballast on Board’ (NOBOB) that was covered starting in 2006.  In a recent publication in the Journal of Great Lakes Research, the GLANSIS team provides a comprehensive update to the inventory and reanalysis of the invasion trends and patterns in light of these more recent events.

In the last 25 years, the list of established nonindigenous species in the Great Lakes basin has grown to 187 species from the 139 species identified by the earlier work. These species remain taxonomically diverse, and most have come from Eurasia (55%).

The Great Lakes have been subject to introductions of aquatic species since at least the early 1800s. Three primary “waves” of invasions are responsible for most of the invasive species, with rates of introduction at these times being significantly higher than the intermediate stable periods.  The third and most recent wave of introductions (~1959–2001) had the highest rate of introductions (1.81 species per year), and was attributed to ballast water. 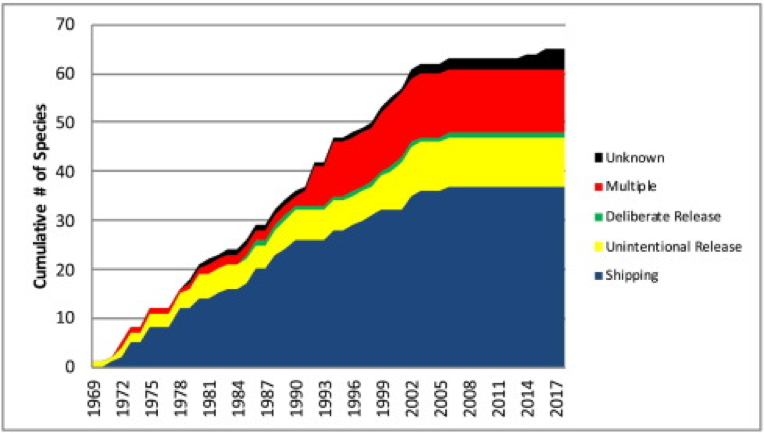 However, over the most recent 25 years, the rate of introduction of nonindigenous species capable of becoming established has fallen. With the 2006 expansion of ballast regulations to include residual ballast sediments in vessels declaring ‘No Ballast on Board’, the rate of new invasions has fallen to a low of only 0.27 species per year.  The newest non-native species to become established in the Great Lakes -- three small zooplankton -- are not considered likely to have been introduced by ballast.

Research examining the impact of these established species has also expanded in the last 25 years.  The 1993 paper speculated that ‘at least 10%’ of established non-native species had significant impacts. Over 30% of nonindigenous species have now been demonstrated to have specific measurable environmental or socioeconomic impacts and are therefore considered to be invasive, showing just how much scientific knowledge of invaders has expanded over the last quarter-century. Through reviewing cutting-edge scientific literature, updating species profiles, and adding new sightings to species range maps, the GLANSIS team continues to work to build on this body of knowledge to protect the Great Lakes for years to come.