Property takings are always something government regulators should be concerned about. Understanding the different types of takings can clarify the topic.

But “regulatory takings claims are often more effective politically, rather than being based on a solid legal foundation” said Richard K. Norton, Esq., Associate Professor and Chair of Urban and Regional Planning Program Taubman College of Architecture and Urban Planning at University of Michigan. Norton was speaking at the Michigan Association of Planning (MAP) annual conference, October 2, 2013.

Statements about private property rights are in both the U.S. Constitution and in the Michigan Constitution:

“No person shall be . . . deprived of life, liberty, or property without due process of law; nor shall private property be taken for public use without just compensation.” Fifth Amendment of the U.S. Constitution

“. . . private property shall not be taken for public use without just compensation therefor being first made or secured in a manner prescribed by law. Compensation shall be determined in proceedings in a court of record.” Article 10§2; 1963 Michigan Constitution 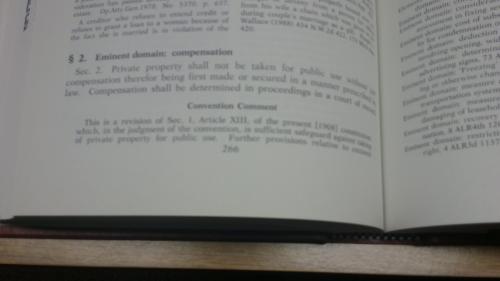 Neither constitution prohibits government from taking property, Norton said, but both provide some protection against governmental abuse. These provisions require that when government takes property, it must do so in a fair way (due process), it must do so only for a “public use,” and it must compensate the property owner a fair amount for the property taken (takings).

The takings clause was originally understood to apply only to actual takings—that is, when government condemns land by exercising its powers of eminent domain. The clause has since been accepted by the courts as applying to regulations as well, after the U.S. Supreme Court ruled in Pennsylvania Coal Co. v Mahon that “if regulation goes too far it will recognized as a taking” (260 U.S. 393, 415 (1922)). 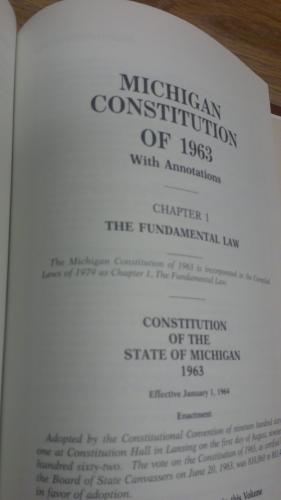 Since the Pennsylvania Coal case the courts have been working out what it means for a regulation to go “too far.” Norton said there are four categories of regulatory

First, a regulatory taking occurs when the government regulates property to the point that it results in a total economic loss for the private property owner. The U.S. Supreme Court decision that established this rule is Lucas v South Carolina Coastal Council (505 US 1003 (1992)). This is called a “total economic deprivation,” taking completely the right to use one’s property. This is the first of two kinds of “categorical” taking (i.e., if the condition or category applies—such as total economic loss—then it is a taking, without consideration of other factors). takings and then explained a thought process to evaluate if such a taking has occurred or not:

In this article the focus is on the constitution’s provisions on private property rights, and the four categories of regulatory takings: categorical (total economic deprivation), categorical (physical invasion), regulatory taking (“ad hoc balancing test”), and dedications or exactions. In the next article on this topic we will focus on the court’s role in disputes about taking, how the courts analyze someone’s claim that a taking has occurred, and further resources on the topic from Michigan State University Extension.

Overlay zoning districts can be a valuable tool

Who should decide if a zoning permit is issued?