The communities of Cedarville and Hessel nestled in the Les Cheneaux Island region have long been popular tourist and recreation destinations. Several large hotels were built in the area in the late 1800s and many individuals from around the country began to build vacation homes around those islands. One of the families who built a cottage out on the Les Cheneaux Islands was the Leopold family. A then young Aldo Leopold visited this cottage on Marquette Island throughout his youth in approximately 1890 – 1919. There are a number of records of Aldo fostering his love of nature through exploring the islands, mapping out hiking routes, documenting flora and fauna, fishing, and sailing. Aldo Leopold went on to study forestry and Yale and eventually became a world-renowned conservationist developing a branch of science known as wildlife ecology and sparking a conservation movement with his land ethic ideology.

Over the next several decades the Les Cheneaux region continued to be a popular tourist destination. However, over time tourism activities declined as cultural norms of vacation shifted and hunting and fishi 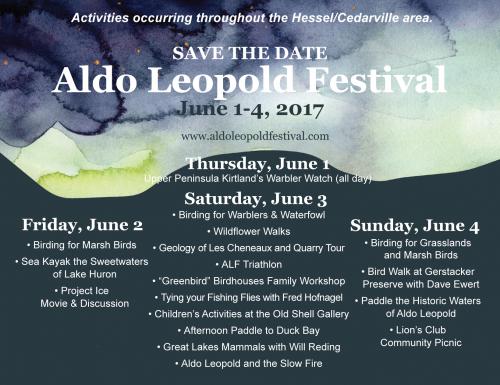 ng tourism declined. Eventually though others began to notice the significance of the area. The ecological importance of this area has been identified by The Little Traverse Conservancy and The Nature Conservancy who have put significant effort in protecting the shoreline in this area due to its pristine relatively undisturbed nature and high quality wetlands. In the late 2000s, local community organizers began to realize the legacy of Leopold utilized through several nature preserves in the area could be a huge asset. Community leaders, with assistance from Michigan State University Extension and Michigan Sea Grant, began efforts to diversify tourism opportunities. In particular, they sought to attract individuals who embrace the land ethic ideologies of Leopold and enjoy activities such as kayaking, hiking, birding and wildflower viewing. Several studies show that these types of nature-based activities are a growing sector of the outdoor recreation tourist market.

The Aldo Leopold Festival has been a cornerstone of these efforts. The festival celebrates Leopold’s legacy and offers diverse activities. Birding trips, wildflower walks, kayak ecotours and a number of nature documentaries and presenters highlight the festival. This year’s festival features two documentaries: “Project: Ice” which details the changes to the Great Lakes occurring as a result of climate change and “Making Waves” which discusses the changes brought on by invasive species to the Great Lakes will be shown. A new addition to the festival this year is a geology tour which includes a tour of the local dolomite quarry and highlights the unique geology of the area.

The Aldo Leopold Festival takes place each year on the first weekend in June and will be held June 1-4, 2017. Festival admission wristbands are available for $5 at the Hessel School House (Avery Arts and Nature Learning Center and festival base), ​3206 W Cedar Road, Hessel, Mich., during regular business hours and on Sunday during the Farmer's Market. They will also be available at the Les Cheneaux Community Schools auditorium ​prior to the films on both Friday and Saturday evenings. Some activities (paddling trips, triathlon, etc.) have separate fees. Complete details online at http://www.aldoleopoldfestival.com/.