When people see an American Robin this time of year, many think it is a sign of spring, but robins can be found year round in Michigan.

Robins in Michigan all year? You Bet! Just like humans, some American Robins that spend their summers in Michigan, migrate to warmer states like Florida in the winter. Not all robins that winter in Michigan, however, will stay to nest and breed in the summer (see Fig. 1). 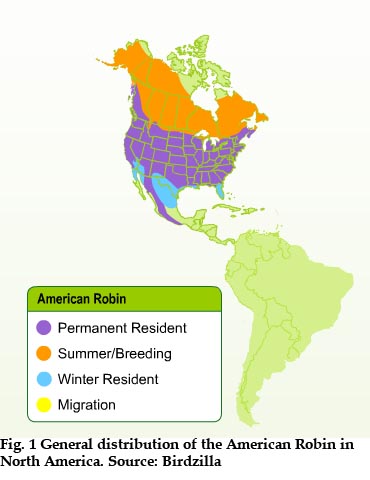 According to Julie Craves, Avian Biologist at the Rouge River Bird Observatory, “American Robins have been present every winter at the University of Michigan-Dearborn since I started counting them in 1993”. The chart below (Fig 2) shows her findings. The bars represent the average number of robins counted per survey (visit) each year through winter 2011-2012. Overall, an average of 348 robins is counted each winter, or an average of 25 per visit.

According to Journey North, there are numerous factors that impact robin migration including:

Has all this talk about migrating birds and potential winter sightings piqued your interest? Get out and search for birds in your area. In southeast Michigan and southwest Ontario, you can use the ByWays to FlyWays Birding brochure created in 2008 by Michigan Sea Grant in partnership with Metropolitan Affairs Coalition and the International Wildlife Refuge Alliance.