In Tanzania, agriculture represents 23% of the GDP while employing 70% of the labor force. ASDP II aims at boosting the agricultural sector. 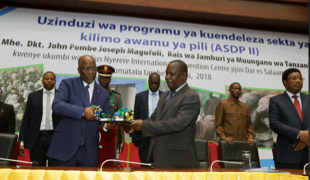 With agriculture contributing towards 23% of Tanzania’s GDP, employing 70% of the nation’s labour force, accounting for 30% of exports and 65% of inputs to the industrial sector, the sector plays a critical role to the nation’s development agenda.

In light of this, the President of the Republic of Tanzania, H.E. Dr. John Pombe Magufuli officially launched the second phase of the Agricultural Sector Development Programme (ASDP II) on 4th June 2018. ASDP II is a flagship programme under Tanzania’s development agenda. Themed Agricultural Sector for Industrial Development,the programme resonates well with the intention of the 5th Phase Government to step up manufacturing and agro-processing industries to push the economy up the value chain.

Photo: The President of Tanzania, H.E. Dr. John Magufuli (left) being helped by the Minister of Agriculture, Dr. Charles Tizeba, MP  (right) to cut a ribbon to launch the second phase of the Agricultural Sector Development Programme (ASDP II) in Dar es Salaam on 4th June 2018.

Feed the Future Innovation Lab for Food Security Policy in Tanzania, the Agricultural Sector Policy and Institutional Reforms Strengthening (ASPIRES) project, will support  ASDP II component four: “Sector Enabling, Coordination and Monitoring and Evaluation,” in collaboration with other implementing partners. This is in line with ASPIRES’ goal of accelerating the adoption of more effective policies and programs to drive broad-based agricultural sector growth, improve household food security and nutrition, and reduce poverty.

Speaking during the launch of ASDP II, H.E. John Magufuli highlighted ASDP II to be a key programme towards solving problems facing the agricultural sector necessary for achieving the country’s industrial agenda.

The launch was witnessed by high Government officials (the Vice President, Hon. Samia Suluhu, the Prime Minister, Hon. Kassim Majaliwa), over 700 key stakeholders including heads of institutions from diplomatic missions, donor community and Chief Executive Officers (CEOs) from the private sector. A total of six Agricultural Sector Lead Ministries (ASLMs) who have been at the forefront in developing the ASDP II who will be the key implementers of the programme also featured at the launch. These included Senior Government officials from across the ASLMs: The Ministries of Agriculture; Livestock and Fisheries; President’s Office: Regional Administration and Local Government (PO-RALG); Industry, Trade and Investment; Lands, Housing and Human Settlement; and Water and Irrigation. The programme was developed in collaboration with the development partners, NGOs and the private sector, while building on the successes and lessons learnt from ASDP I implemented from 2006/2007 to 2013/2014.

Speaking on behalf of development partners, Fred Kafeero, United Nations FAO Representative in Tanzania commended GoT on ASDP II. In his remarks, he said: “We as Development Partners are encouraged by the efforts of the Agricultural Sector Lead Ministries (ASLMs) and the Government to prepare and endorse such a comprehensive and well-articulated programme.”

ASDP II is a result-oriented sector programme that is set to transform the agricultural sector towards higher productivity, enhanced commercialization and smallholder farmer income for improved livelihood (comprising about 97.5% of rural households), food security and nutrition by 2025. It serves as the main vehicle for the implementation of the sector strategy (ASDS II), but also sub-sector policies and development programmes aligned with ASLMs and the private sector including crops, livestock, fisheries, marketing, food and nutrition security.

For each agro-ecological zone (AEZ), commodity value chains for inclusion were prioritized based on the potential to create the biggest impact in terms of yields, profitability, improved livelihood, commercialization and industrialization.

Maize, cassava, rice and pulses are among the priority commodity value chains under ASDP II, accounting for 53% of the caloric intake for Tanzanians. As regards agricultural trade, tobacco, cotton, and coffee contribute 17.6%, 14.5% and 11.0% respectively to foreign export earnings. On the other hand, wheat and palm oil contribute 31% and 27% respectively to the share of total food import value. Tanzania is also a major importer of dairy products, accounting for 9% of commercial dairy imports into sub-Saharan Africa.

In terms of implementation, the programme will be implemented in two stages of five years each and will entail four key interlinked components under which a total of 23 priority investment areas were developed. The first five years of ASDP II implementation will start from the year 2018 and will prioritize commodity value chains including maize, rice, sorghum and millet, cassava, horticultural crops, oil seed crops, cotton, coffee, sugarcane, cashew nuts, tea, potatoes, pulses, banana, dairy, beef, goat and sheep, poultry, fish and seaweed according to strategic ecological zones (Table 1).

Key achievements of ASDP I

ASPIRES has been a key collaborator to the Ministry of Agriculture (MoA) in developing the ASDP II and rolling out the ASDP II Socialization and Capacity Building Workshops (April to June 2017). 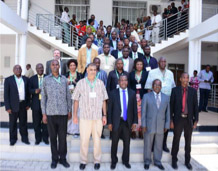 The workshops were a joint effort between the Government of Tanzania and partners including ASPIRES, Public Sector System Strengthening (PS3), Alliance for a Green Revolution in Africa (AGRA) and Africa Lead, together equipping a total of 960 LGA leadership with a common understanding of their roles in the implementation of ASDP II. Beneficiaries of these workshops included Regional Commissioners (RCs), Regional Administrative Secretaries (RASs), District Commissioners (DCs), Municipal Council Mayors, District Executive Directors (DEDs), District Planning Officers (DPLOs), District Agriculture, Irrigation and Cooperative Officer (DAICOs) and District Livestock and Fisheries Officers (DLFOs). They were in attendance to witness the ASDP II launch.

Photo: The Minister of Agriculture, Hon. Dr. Charles Tizeba, MP, poses in a group photo with participants of the ASDP 2 Socialization and Capacity Building Workshop in Mwanza.

Intra-Rural Migration and Pathways to Greater Well-Being: Evidence from Tanzania

Do Medium and Large Scale Farms Generate Income Spillovers for Rural Households? The Case of Tanzania

Synergies Between Small- and Medium- Scale Farmers in Tanzania