How to assess the impact of a freeze on early fruit development.

As the trees begin growth in the spring the buds begin to swell and lose the ability to withstand cold temperatures. As the buds develop, warmer and warmer temperatures (still below freezing) can damage them. The killing temperature is often called the critical temperature and is defined as the temperature that buds can withstand for a half-hour. Please see my Michigan State University Extension article on bud development and cold hardiness in the spring and tables of critical bud temperatures.

In general, there is a range of temperatures over which damage occurs with more and more buds and flowers damaged at lower and lower temperatures until all the fruit buds are killed. Often the freeze will only damage some of the flowers such as the most developed ones or flowers in the bottom of the tree.

After a freeze, people often want to know how bad the damage was. It takes several hours for the symptoms to develop. As frozen tissues thaw, they will turn brown or black if they were damaged or killed by the cold, revealing the extent of the damage. Experienced fruit growers can quickly assess the damage in the days following a freeze. This article contains pictures of frost damaged flowers for growers and home fruit growers who wish to determine frost damage after a freeze.

At or near the bloom stage, the critical temperature is the same for almost all fruits and flowers. Freezing temperatures of 28 degrees Fahrenheit will result in about a 10 percent loss and 24 F in a 90 percent loss. In a radiation freeze with clear, calm conditions, fruit on higher sites or in the tops of trees will be less damaged than those at lower sites. The percent of flowers killed in a frost may or may not relate directly to lost yield later in the season. With large-fruited fruits such as apples, peaches, plums and pears, the loss of 50 percent of the flower is not devastating since we may only want a small percentage of the flowers to become fruit. For small-fruited fruits such as cherries, blueberries and grapes, many small fruit are needed for good yields and a full crop. Crop losses due to freezing temperatures are almost always significant in cherries.

Stone fruit have a very simple flower structure. The flower contains a single pistil (the female part of the flower that will become the cherry fruit) that is exposed inside a cup formed by the sepals and petals of the flower. If the pistil is brown or black after a freeze, that flower will not develop into a cherry because the pistil has been killed. Early in the season, when the buds have swollen but not opened, the flower buds are often cut open across the bud to inspect the pistil. If this is black, the flower has been killed and the fruit will not form. A healthy green pistil means this cherry is alive. Both the pistil and the style are green in this photo of a sweet cherry below. This flower was not damaged by a freeze. 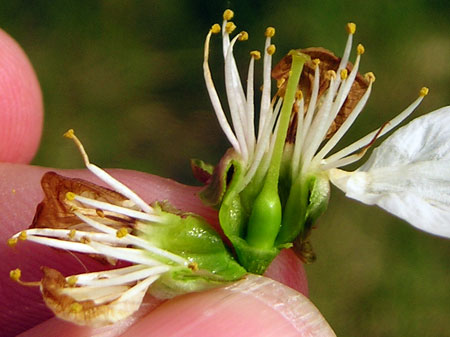 This cherry flower was not damaged by a freeze the day before.
Photo credit: Mark Longstroth, MSU Extension

Often you can look into the center of the flower to see if it is black, or you can tear it open to see if the pistil has been killed. The entire pistil of the sweet cherry in the photo below was killed by a freeze the day before this picture was taken. By the next day, damage was easy to see. The pistil has turned black and shriveled. 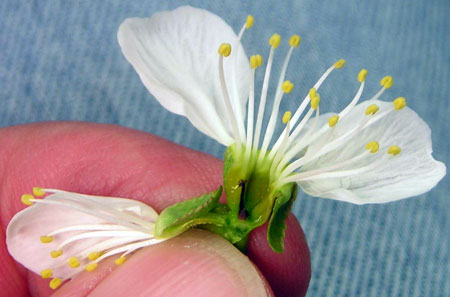 The pistil of this cherry flower was killed by a freeze the day before
and has shriveled and turned black. Photo credit: Mark Longstroth, MSU Extension

Apples and pears are very different than stone fruit. The buds of stone fruit trees are either flowers or leaf buds, and not a mixture of both. In cherries and plums where there is more than one flower, all the flowers in a bud are about the same age. In apples, the fruit buds are really small shoots with both flowers and leaves. An apple flower cluster is shown in the photo below. In apples, the flower in the center of the flower cluster is the oldest and most developed and will be the first flower to bloom. This central flower is called the king bloom and is the most desirable of the flowers in the cluster. The king bloom has the potential to be the largest fruit. 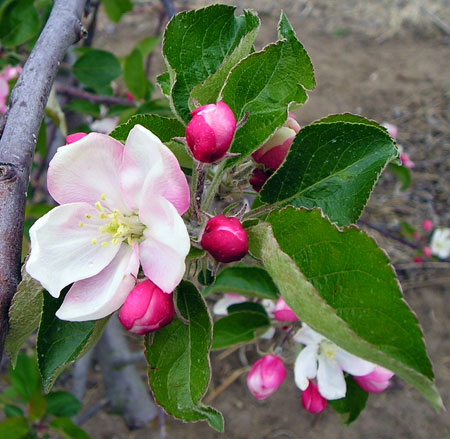 The king bloom of the apple flower cluster has opened, but the
side blooms are still closed. The king bloom is more susceptible
to freeze injury at all stages of the apple bud development in the
spring and is often the first flower killed in the cluster.
Photo credit: Mark Longstroth, MSU Extension 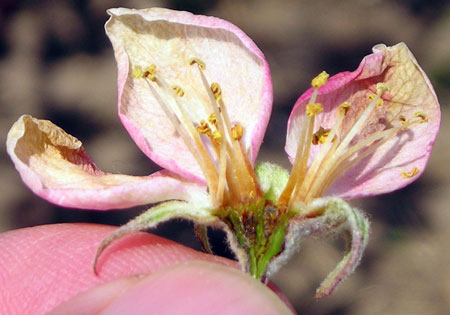 The dark brown center of this apple flower indicates it was killed by a freeze.
Photo credit: Mark Longstroth, MSU Extension

When checking apples from frost damage, check the king and side blooms separately. Many times the king blooms are killed and many of the side bloom are undamaged. 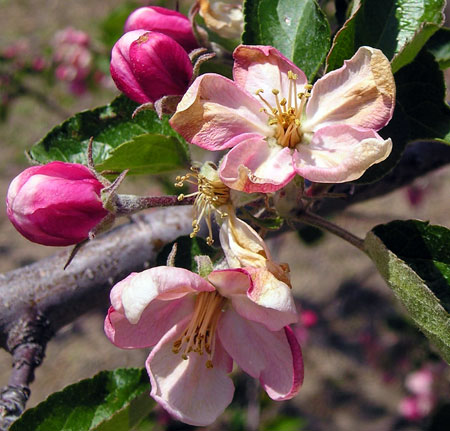 The dark brown centers and signed appearance of the petals
indicate that both kind and side blooms were killed in a freeze the
morning this picture was taken. The king bloom in the center of
the cluster has lost its petals. Photo credit: Mark Longstroth, MSU Extension