Be careful using RoundUp and other glyphosate herbicides

Mystery symptoms in blueberries may be glyphosate injury . Shoot removal may be the best option if symptoms are severe.

Many fruit growers, especially small growers, use RoundUp (glyphosate) herbicide and its generic cousins for weed control. This spring, I am seeing a lot of symptoms of glyphosate injury. This is probably due to glyphosate use last fall. Glyphosate materials interfere with amino acid synthesis and disrupt protein synthesis. They are nonselective, post-emergent materials that work well against both annuals and perennials.

Glyphosate is absorbed by the leaf’s other tissues. It poisons the biochemical machinery in the plant. It is translocated with the sugars from photosynthesis to actively growing tissues where it poisons them. Glyphosate materials cause little damage if they not do drift on to green tissues such as green leaves and young stems. If it is applied in the fall when there is little growth you probably will not see any symptoms from small amounts of drift. You may not even remember that you used an herbicide in the fall when you wonder what is causing the stunted growth in your plants in the spring. Growers forget that this powerful herbicide can kill most plants at low doses and begin to think that it is safe to use around blueberries.

Glyphosate is easy to apply with a hand sprayer and can be used to spot treat problem weeds. Some farmers and homeowners are using glyphosate as a total weed control program with several applications per year to kill weeds. This eliminates the use of soil active materials that require accurate sprayer calibration to avoid damaging the blueberry plant. I often recommend RoundUp or other materials in the fall to kill invasive perennials in blueberry plantings. This is because the fall is the best time to kill perennial weeds with glyphosate materials. I usually caution that extreme care be used, because this is an excellent time to kill any plant with this broad-spectrum plant killer. The herbicide is taken up by the plant and stored in the bark and wood of the stems as well as the root system. When the plant begins growth in the spring, the herbicide stunts new growth and if the dose was high enough, it will kill the plant.

The symptoms I am seeing vary depending on the dose of drift that the plant received last fall. The worst case is extreme stunting of the growing points where there are only small tufts of tiny leaves instead of new shoots. Less extreme are the short shoots of small thin leaves. I see a wide range in the short shoots crowded with narrow leaves symptom that I think is dose related. I am also seeing thin, willow-like leaves on normal looking shoots that I assume are from a very low dose of the herbicide. 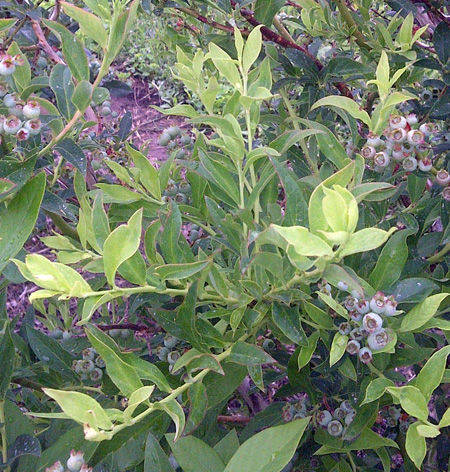 Most growers might wonder what caused the narrow, willow-like leaves on this bush. Excessive branching is another symptom of glyphosate injury. The newest leaves at the tips of the shoots show less damage than the first shoots out at the base of the shoots. This shoot is recovering from a small dose of glyphosate last fall.

What to do depends on the extent of the injury. I often see only a few canes affected in the bush. These canes were the ones that received drift last year and the herbicide was stored in the cane and perhaps in the portion of the root system that feeds that shoot. 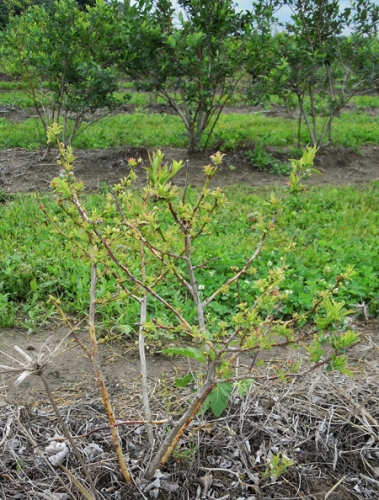 Tufts of tiny leaves are a symptom of a large dose of glyphosate last fall. Note the healthy plants in the next row. This young plant will probably not survive since the whole plant is affected. 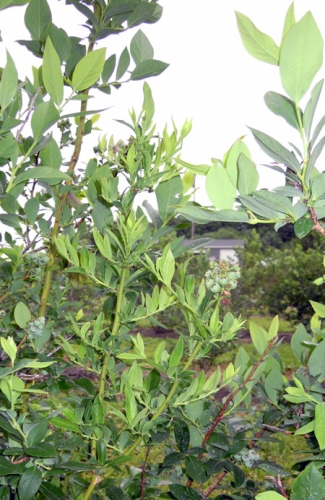 This shoot in the center of the photo with narrow leaves crowded on the growth probably received a small dose of glyphosate to the green bark at the base of the shoot last fall. This shoot may recover. 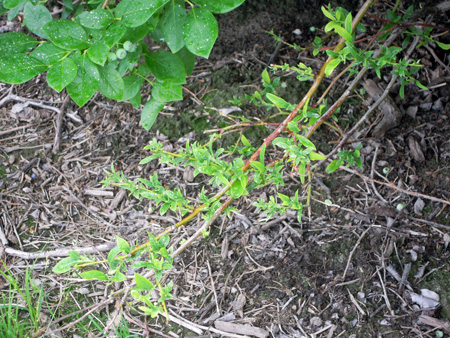 This low branch received some drift from a glyphosate application last fall. Note the thin, strap-like leaves and short shoots in comparison to the healthy leaves in the upper left. There is no reason to save this shoot on a mature bush. 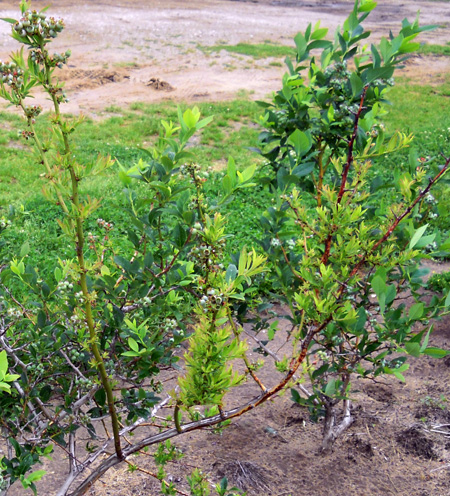 This shoot shows the full range of glyphosate herbicide injury symptoms: small tufts of leaves, short shoots with strap-like leaves, excessive branching, and normal shoots with narrow, willow-like leaves. Note the healthy leaves and shoots on the bush behind it. This was the only affected branch on this bush, so the affected shoot should be removed.