Greenhouse growers need to recognize symptoms on broad mite injury and understand the most effective miticides to control this pest.

Broad mites are less than 0.3 millimeters – smaller than a period in font size 12 print – and infest several greenhouse crops, including African violet, ageratum, azalea, begonia, dahlia, gerbera, ivy, bedding impatiens, lantana, marigold, New Guinea impatiens, peperomia, snapdragon, torenia, verbena and zinnia. According to Michigan State University Extension, broad mites will damage flowers and foliage of begonia and cyclamen and bronze the lower leaf surfaces. Their toxic saliva causes twisted, hardened and distorted growth in the terminal of the plants (see photos below). This feeding injury will last for a long time even after the infested plant has been treated and the mites have died.

According to information from North Carolina State University, Female broad mites lay 30 to 76 eggs on the leaf surface over an 8- to 13-day oviposition period. Unmated females lay male eggs; mated females usually lay four female eggs for every male egg. The larvae hatch in two or three days and emerge from the egg shell to feed. Larvae are slow moving and do not disperse far. In two or three days, the larvae develop into a quiescent larval stage. Quiescent female larvae become attractive to the males, which pick them up and carry them to the new foliage. Males and females are very active, but the males apparently account for much of the dispersal of a broad mite population in their frenzy to carry the quiescent female larvae to new leaves. When females emerge from the quiescent stage, males immediately mate with them. Males live five to nine days; females live eight to 13 days. 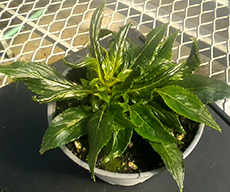 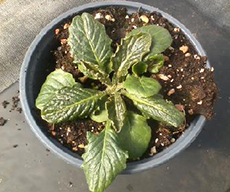 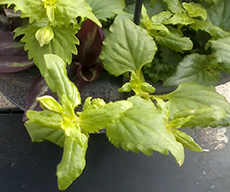 In order to control broad mites, you can place infested plants into water with temperatures of 111 degrees Fahrenheit for 15 minutes; this will destroy the mites without damaging the plants. Also, broad mites are very susceptible to a number of effective miticides, according to MSU entomologist David Smitley, including Avid, Akari, Judo**, Pylon, SanMite and 1 percent horticultural oil (**Note: exceeding a 1 percent concentration of horticultural oil may result in leaf or flower injury). An alternative is to spray with 0.25 or 0.5 percent horticultural oil once per week.

Reducing the humidity below 80 percent will also be unfavorable to broad mites as they prefer high humidity. Be sure to get good spray coverage when treating for broad mites. Generally, one application – if done properly – will control this pest problem.

For additional assistance on broad mites or any other greenhouse floriculture issue, contact your MSU Extension floriculture educator.

** On the Judo label: Do not use on geraniums, Peperomia, Dracaena and ‘Classy’, ‘Attache’or ‘Vogue’ roses. It is not recommended to use Judo on Alstromoeria, Agyranthemum, Bacopa, Matthiola, Lobelia, New Guinea impatiens, ferns, phoz, English ivy, cyclamen, hydrangea, schefflera, fuschia, crotin, neanthebella palm and Primula.

Ice, ice baby: How to prevent your plant diagnostic samples from freezing