Cherry leaf spot causes significant economic loss in Michigan each year. Management has become more complicated due to the introduction of novel fungicides and resistance issues.

Cherry leaf spot, caused by the ascomycete Blumeriella jaapii (Rehm) Arx, is arguably the most damaging fungal pathogen of tart cherry, and has the potential to significantly reduce profits for growers in the Great Lakes region of the United States. Cherry leaf spot primarily affects foliage and, as a result, reduces the photosynthetic ability of the tree. Infected tart cherry leaves will turn yellow and defoliate prematurely if the disease is not effectively controlled (Photo 1). Sweet cherry leaves yellow but are retained. Less than 50 percent defoliation by early September is considered acceptable control in Michigan. 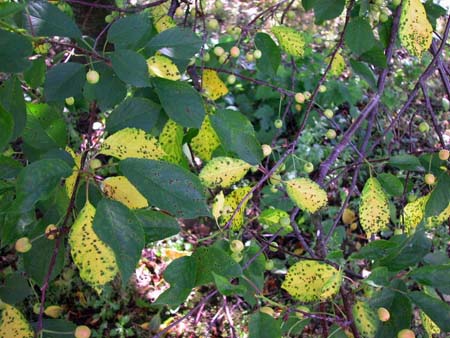 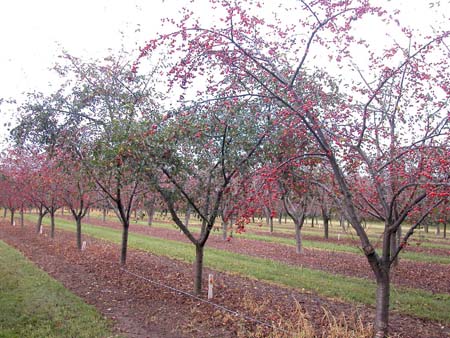 B. jaapii overwinters on fallen leaves on the orchard floor and produces apothecia, or sexual spore-bearing structures, in the spring. The primary infection period may last two to six weeks depending on conditions. Optimal apothecial development occurs between 6 to 16°C (43 to 61°F) with ascospore discharge increasing with temperature between 8 to 30°C (46 to 86°F). Ascospore release occurs as tissue dries following the thorough wetting of mature asci. Germination occurs on the surface of the leaf and infection occurs through the leaf stomata. Leaves remain susceptible throughout the growing season, contrary to the in vitro evidence of ontogenic, or age-related resistance in leaves. Following infection, acervuli develop on the underside of the infected leaf and produce a visible mass of white conidia. Conidia are dispersed from leaf to leaf by wind or rain and the infection cycle can be repeated several times during a single season, depending on conditions. The conidial stage was the basis for the development of an effective infection model by Eisensmith, an adaptation of which is still in use today. Visit Michigan State University’s Enviro-weather web site for more information.

All commercially cultivated cherry cultivars are susceptible to cherry leaf spot, although less susceptible cultivars have been found. The primary method of management is through fungicide application, with five to seven applications recommended per season depending on disease pressure. The most common fungicides used to control cherry leaf spot include chlorothalonil, captan, strobilurins and several sterol demethylation inhibitors such as fenbuconazole, tebuconazole, myclobutanil and fenarimol. Salts containing the Cu2+ ion, such as copper hydroxide or copper sulfate, and dodine are also used.

In lieu of innate resistance to pathogenic fungi in tart cherry cultivars (Prunus cerasus L.) and sweet cherry cultivars (Prunus avium L.), cultural practices and sanitation are frequently helpful in controlling fungal diseases, but ultimately fungicides are required to maximize yield and quality. Intensive fungicide use provides a potent selective pressure that increases the frequency of fungicide-resistant isolates in a pathogen population. As the frequency of resistant isolates increases, a resistant subpopulation may develop. This subpopulation can increase over time and lead to a reduced level of disease control in that population. This is commonly referred to as practical field resistance, and is defined as the point at which the frequency and levels of resistance are great enough to limit the effectiveness of disease control in the field.

In the late 1960’s, the first reports of sporadic fungicide resistance were documented in Europe. In 1969, reduced sensitivity ofVenturia inaequalis (Cke.) Wint., the causal agent of apple scab, to dodine was reported in New York. This report was the first documented case of field resistance to any fungicide used in fruit production in the United States. By the late 1980’s, over 60 resistant fungal genera in hundreds of crop systems had been documented. Currently, all of the systemic fungicide groups (sterol inhibitors, benzimidazoles, strobilurins, phenylamides and dicarboximides) have been affected by resistance.