Anglers, boaters and residents of Grosse Ile may have noticed the recent appearance of construction barges on the lower Detroit River. These barges are part of a two-year habitat restoration project in the waters surrounding Stony Island. Stony Island is a large uninhabited 52-acre island in the lower Detroit River, located in the township of Grosse Ile. The island was once owned by a local dredging company and during the early 1900s it housed dozens of families, construction buildings and equipment during construction of the adjacent Livingstone Shipping Channel. The Island’s two major wetland areas, known locally as the upper and lower bays, were created by the construction of limestone dikes which provided the necessary protection for two large emergent wetland areas from the river’s currents and wave surges. Both bays provide tremendous fisheries for local fish stock, including important spawning grounds for local pike populations. Today, the island is managed by the Michigan Department of Natural Resources as part of the Pointe Mouillee State Game Area and has largely reverted to its once natural state. However, over the last 50 years, periods of high water, waves and ice scouring have eroded the protective shoals leaving the coastal wetlands in jeopardy.

In 2014, Michigan Sea Grant worked in partnership with Friends of the Detroit River, MDNR, the Detroit River Public Advisory Council and others to develop a plan to restore the 2,000 feet of eroded shoals and protect the wetlands. In 2015 we helped secure funding for the project and in June 2016, the Friends of the Detroit River received the balance of funds totaling just over $7 million to begin construction of the habitat restoration project on Stony Island. The money was received in the form of a grant from the National Oceanic and Atmospheric Administration (NOAA) as part of funds that were provided through the Great Lakes Restoration Initiative (GLRI). GLRI money is approved on an annual basis by Congress to help fund projects in the Great Lakes to improve wetland habitat, reduce pollution and support other projects to benefit the waters of the Great Lakes. 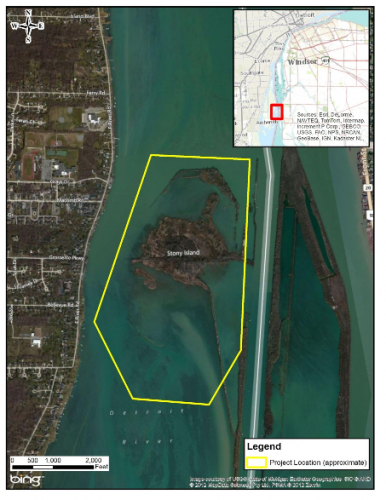 This fall construction began which will begin to rebuild and improve some of the island’s existing shoals, which in turn will help protect and improve the island’s wetlands. Along with the shoals work, a number of habitat structures will be built that will benefit the fish, amphibians, reptiles, birds and other animals that frequent the island as well as improve recreational opportunities for area residents. These habitat structures include snake hibernacula, mudpuppy refugia, turtle basking structures and nesting areas for the common tern, an avian species listed as threatened in Michigan in 1978.