During Beach Hazards Awareness Week, learn how to save yourself if you are ever caught in a rip or channel current.

The National Weather Service reports that the number of rip and channel current rescues and drowning deaths in the Great Lakes was above average for 2011. From 2002 through 2010, an average of 10 deaths per year were reported. In 2011, 15 drowning deaths occurred, with the majority of those occurring on Lake Michigan. In addition, 68 rescues occurred in the Great Lakes in 2011.

How rip and channel currents form and how to escape them

Rip currents form when waves break over a sandbar near the shoreline, piling up water between the breaking waves and the beach. One of the ways this water returns to the open water is to form a rip current, a narrow but powerful stream of water moving swiftly away from shore as it breaks through the sandbar. To escape a rip current, you should go with the flow of the water until the current dissipates and swim parallel to the shoreline. Once out of the current, swim back toward shore. 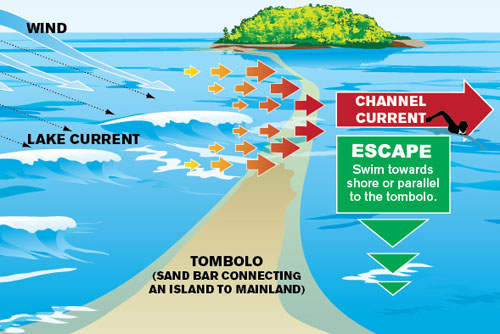 A channel current flows parallel to shore, between the beach and an island. A channel current forms when the presence of a partially submerged sandbar connector between the mainland and an offshore island causes the flow of water to speed up as it goes between the island and the shore. A channel current looks like a river running parallel to shore. A swimmer can be pushed off the sandbar or swept to either side of the sandbar. Swimmers tend to panic and try to get back to the “safety” of the unstable sandbar, rather than swimming to the shore. This may eventually exhaust swimmers, resulting in drowning. To get out of a channel current, swim toward shore rather than swimming back to the unstable sandbar. Even if the sandbar may be closer, swim toward the shore ─ this is the best route to safety.

For more information on rip and channel currents,visit the Michigan Sea Grant website.

Michigan Sea Grant, along with the National Weather Service, the Marquette Fire Department and the YMCA, is coordinating a session on rip and channel currents July 24 at this year’s Life of Lake Superior Youth Program at the Marquette waterfront.

Responsible and sustainable travel - Is it here to stay?