2016 marks the 100th anniversary of Emma Genevieve Gillette's enrollment at Michigan Agricultural College, now Michigan State University. Gillette was to become the first and only woman graduate in the college's first landscape architecture class of 1920.

2016 marks the 100th anniversary of Emma Genevieve Gillette’s enrollment at Michigan Agricultural College, now Michigan State University. Gillette was to become the first and only woman graduate in the college’s first landscape architecture class of 1920.

Distinguished landscape architect and Michigan conservationist E. Genevieve Gillette was born in Lansing on May 19, 1898. Gillette credited her life-long passion for nature to her childhood upbringing on a farm outside of Lansing, and to her father’s endearing love of the outdoors. While at college, Gillette would develop a friendship with classmate P.J. Hoffmaster, who became Michigan’s first superintendent of state parks. This friendship and professional relationship would last a lifetime.

After returning to Michigan in 1924 at Jensen’s encouragement to help create a state park system, Gillette established and maintained a landscape architecture practice in Ann Arbor. At the same time, she volunteered her services to P.J. Hoffmaster documenting Michigan’s natural heritage for potential park sites. She would continue her volunteer activity throughout her life, becoming one of the “First Friends” of the developing system.

Over the decades, Gillette’s career supported efforts to raise awareness of Michigan’s natural wonders and their value to society. In addition to creating parks and designated natural areas, she established important conservation groups, gained funding for Michigan State Parks, and even advised President Lyndon and Ladybird Johnson on recreation and nature.

The story of green infrastructure in Southeast Michigan and beyond starts with P.J. Hoffmaster’s request for volunteer site research efforts from Gillette and the Michigan Botanical Club. Gillette also facilitated an advisory collaboration between Hoffmaster and Jensen, who was active in establishing state park systems in Indiana and Illinois. The three together reinforced Hoffmaster’s vision for a ring of recreation lands around Detroit to serve the needs of a burgeoning post-World War II population within an urbanizing Detroit metropolitan region.

Through her relationship with Jens Jensen and the Ford Family, in the early 1940s Gillette fostered the transfer of the former 2,500 acre Edsel & Eleanor Ford Family Estate at Haven Hill to the Michigan Department of Conservation (now MDNR) as a starting point for southeast Michigan’s State Park and Natural Area System. After the estate became a state park, Gillette and the Michigan Botanical Club continued documenting the park’s unique attributes and established the Haven Hill Ecology Trail for nature study and interpretation. The trail committee became the foundation of the State Natural Area Advisory Council, documenting significant natural areas throughout the state for 20 years. The Haven Hill Natural Preserve, designated a State Natural Area and named a National Natural Landmark by the National Park Service, is one of the finest examples of its biological communities in the region.

The Friends of Highland Recreation Area and the Michigan Department of Natural Resources Parks Division are honoring Gillette’s legacy with the establishment of a site interpretive marker. The potential for a youth and family outdoor mentoring program is currently being explored as well.

Genevieve Gillette’s purpose and passion live on today, 100 years after first stepping onto the campus of Michigan Agricultural College (Michigan State University). She has received numerous honors and recognitions, including the Distinguished Alumni Award from Michigan State University, induction into the Michigan Women’s Hall of Fame, a star on the Michigan Walk of Fame, a Michigan Botanical Club Distinguished Service Award, a Michigan Recreation and Park Association Special Award, and the Genevieve Gillette Visitor Center and Nature Association at P.J. Hoffmaster State Park.

To this day, E. Genevieve Gillette remains a credit to the school and the profession she chose. She is a shining example for every woman, man, and child who values, respects, and seeks to steward Michigan’s exceptional natural environment. 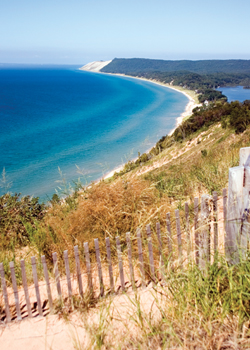 If you would like to contribute and/or learn more regarding volunteer efforts by The Friends of Highland Recreation Area to “Tell the Story and Honor The Legacy” of Genevieve Gillette and Haven Hill, please contact: fohravolunteer@gmail.com, (248) 787-1750. Speaker & presentation available upon request.