Food retailing has shifted from corner groceries, to supermarkets to supercenters

The evolution of the groceries have left many living in urban areas without easy access to fresh food. 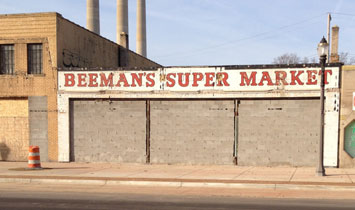 In urban areas, there is a void as corner grocery stores and local supermarkets have nearly disappeared. Big box supermarkets and supercenters have taken their place, often located far from where potential urban-dwelling customers live.

Photo: City supermarkets, such as this one in Lansing, Mich., have almost completely disappeared from the urban landscape. Photo by Randy Bell

Many people who grew up in urban communities during the early part of the 20th century hold fond memories of the corner grocery store. The last-minute need for a quart of milk didn’t require a car trip just a trip to the “mom and pop” store down the street.

Were the corner stores of old as wonderful as how we remember them? No, according to economic historian Marc Levinson, the author of the book, The Great A&P and the Struggle for Small Business in America. Levinson told National Public Radio, "Most of these stores had a very limited selection. They had no unique products at all. ... [Shoppers] would have to go to two or three different grocery stores in their neighborhood if they wanted different type of goods, plus the butcher, the baker, and the fruit and vegetable store. ... The consumer's choices were pretty constrained."

A&P replaced many mom and pop stores. Their empire of nearly 16,000 modern grocery stores held substantial inventories of food. Said Levinson, "The company benefited from the advent of widespread auto ownership, which enabled grocery shoppers to graze for food supplies outside the boundaries of their immediate neighborhoods, as well as of refrigeration and cellophane packaging.”

As it turns out, the innovative business model employed by A&P in the mid-20th century was eventually rendered outdated by what now are called “big box” or supercenter grocery stores. A&P declared bankruptcy in 2010.

According to Columbia University’s Graduate School of Architecture, Preservation, and Planning, big box retail, which is reliant upon on auto-borne shoppers, offers acres of free parking and provides no-frills site development that eschews any community or pedestrian amenities. They offer low prices and great convenience for an increasingly time-deprived society and derive their profits from high sales volumes rather than price mark up.

As Michigan State University Extension works to increase access to healthful foods in urban areas, the fact is most of the remaining small, urban markets carry an overabundance of junk food, soda and alcohol, canned goods and packaged convenience foods. Dollar stores and drug store chains also are expanding their food selections, but these most often are shelf-stable and packaged convenience food items. But there are some encouraging developments.

City markets, farmers markets and small, ethnic markets are being established in many urban areas. These offer a wider selection of unique, specialty food items not found elsewhere as well as selections of cheeses and fresh meats, fruits and vegetables.

And even the big box retailers are starting to think small. Wal-Mart in 2010 announced plans to build small format stores that will include grocery items in “underserved urban markets.” Other retailers are considering similar moves.

It’s unreasonable to expect that urban communities will revert to their idyllic days of a grocery store on every corner. There are, however, efforts beginning to emerge that can increase retail grocery options for urban dwellers in new and creative (and hopefully successful) ways.