Leaf spots on your perennials, shrubs and trees may be caused by four-lined plant bugs.

The four-lined plant bugs are here. Young larvae, or nymphs, are red with black markings and the adults are a bright yellow-green with bold black longitudinal stripes. MSU Extension educators on our June 1 conference call reported new damage and a lot of four-lined plant bugs, especially on butterfly bush. You can expect them to feed heavily in June and disappear by mid-July. 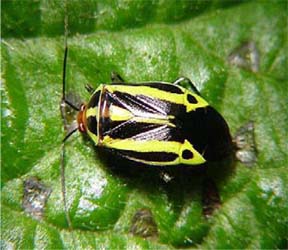 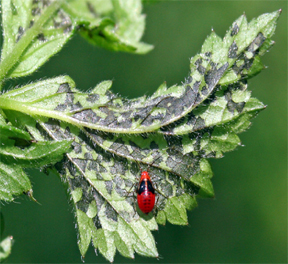 Four-lined plant bugs feed on a wide variety of perennials, shrubs and trees, leaving sets of leaf-spots that look a lot like a disease (Photo 3). The spots may be circular or angular, light brown to purple or black, or may be ringed. They are caused by saliva that is injected into leaves from their needle-like sucking mouthparts. Sometimes, the leaves may also be distorted where the plant bugs are feeding. 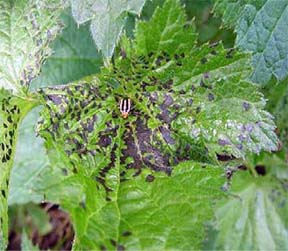 Because the four-lined plant bugs themselves may not be seen, the best clue that these leaf-spots are caused by an insect and not a disease is the pattern of damage. Feeding damage from four-lined plant bugs may appear on a single leaf or group of leaves, while the leaves around them are fine. A clumped feeding pattern is much more typical of an insect than a disease. The leaves on some trees may also be affected, but only on low-hanging branches.

The plant bug feeding damage is rarely bad enough to justify a spray. If spraying is necessary, an insecticide containing carbaryl (Sevin) or a pyrethroid (resmethrin, permethrin or cyfluthrin) should work well.