Walk your fields to assess any possible damage to alfalfa stands.

Reports of freezing temperatures below 20°F across Michigan following the unseasonable warm weather in March have producers wondering if there has been any damage to their alfalfa stands.

Several factors may lead to either having damage or not having damage. These include maturity of the alfalfa, age of stand, duration of the freezing temperatures, soil moisture levels, soil potassium levels, and varietal selection. The damage the alfalfa plant will normally be to the stems of the plants. Generally, temperatures lower than what was experienced this week are required to kill alfalfa stems.

To assess the damage after frost occurs, wait until the air temperature recovers, usually that same afternoon. A hard frost will cause the alfalfa stems to either “shepherd hook” or act as a lazy stem. If, after a warming period, the stems straighten back up, the stem is uninjured and will resume growth as if no frost had occurred.

Since most of the alfalfa in Michigan has just begun to grow, harvesting or cutting the alfalfa is not recommended. The alfalfa will recover from the crown or active axillary buds on the lower portion of the plant.

While the freezing temperatures may have some effect on alfalfa stands, it’s always advisable to walk your fields and assess alfalfa stands following the winter to determine the level of winterkill and heaving established stands may have received. To determine if there has been damage to the stand, random plants can be dug to evaluate the plant crowns and taproots. Healthy taproots are creamy-white and firm. Freeze-injured, heaved or winterkilled plants will have a “watery” tan or brown appearance and be soft.

If widespread damage is present in the stands, consider planting a new alfalfa stand in another field. 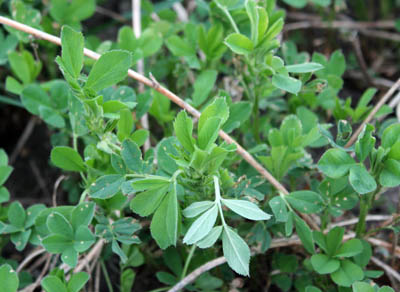 Freezing weather caused this alfalfa leaflet to droop, but caused no permanent
damage to the plant or the stand. Photo taken March 29, 2012. 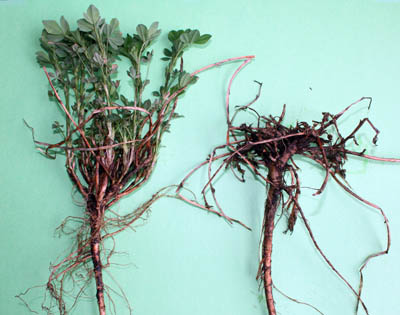 Damaged plant on right due to heaving compared to healthy growing plant
on left with lateral roots helping to anchor the plant. Photo taken March 29, 2012.

Getting Started with Hay Production